Asemkhan Nuguzhinova, General Manager of the Information and Analytical Support Department of Analytical Center of Oil and Gas JSC
The Republic of Kazakhstan plays a vital role in the world oil market. Having a significant hydrocarbon resource, Kazakhstan is one of the 20 largest oil-producing countries.
According to BP (2019) [1], Kazakhstan's recoverable oil reserves amount to 3.9 bln barrels or 1.9% of global reserves. In 2018, the country accounted for 2.0% of global oil production, so Kazakhstan took 13th place in the world.
In June 2019, oil production in Kazakhstan, according to Information and Analytical Center of Oil and Gas JSC (IACOG) amounted to 7.8 mln tons (1.96 million barrels per day) . World oil production, according to Thomson Reuters, in June of this year amounted to 101.3 mln b/d [2]. Thus, at the end of the first half of 2019, Kazakhstan accounted for 1.9% of global oil production. Among the CIS countries, Kazakhstan is known to take second place after Russia (11.4 mln b/d in 2018 [1] and 11.15 mln b/d in June 2019 [2]). 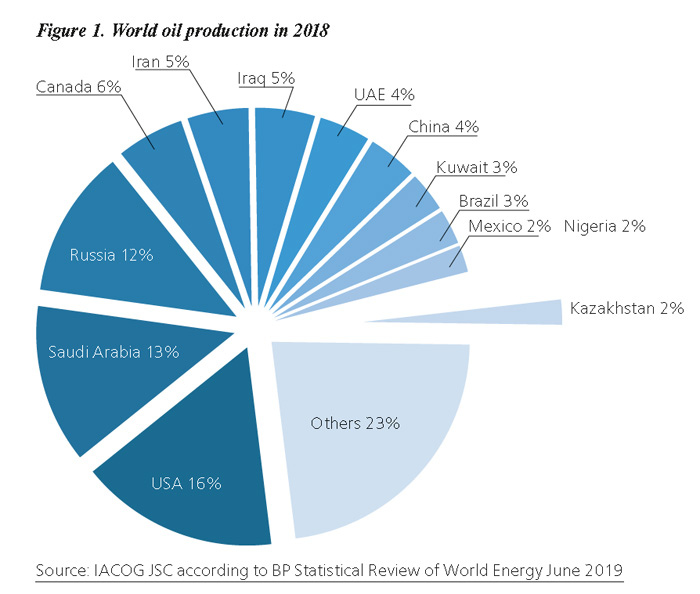 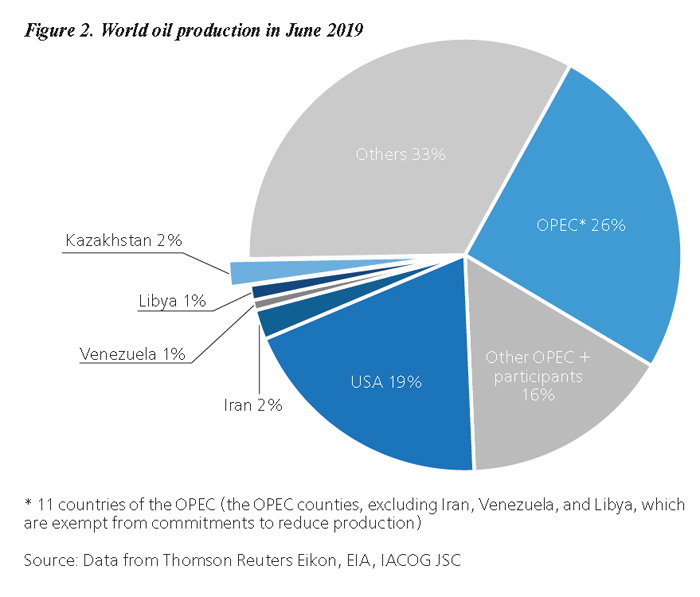 Today Kazakhstan has a number of obligations under the OPEC+ countries Agreement. At the end of 2018, the Republic of Kazakhstan signed an agreement on the OPEC+ reduction of oil production (hereinafter – the Agreement). The country agreed to reduce oil and gas condensate production by 40.0 thous. barrels/day: from 1,900 thous. b/d (rate of November 2018) to 1, 860 thous. b/d. At the beginning of 2019, Kazakhstan also became a member of the Ministerial Committee for Monitoring the Implementation of the Agreement. In early July of this year, OPEC+ countries decided to extend the terms of the Agreement for another nine months until 31 March 2020.
In the first half of 2019, the average production of oil and gas condensate in the country amounted to 44.2 mln tons (or 1,857.8 thous. b/d), which is by 2.2 thous. b/d below the required level of the Agreement, i.e., Kazakhstan complies with the terms of the OPEC+ Agreement.
One of the main factors of Kazakhstan's compliance with the requirements of the Agreement was the reduction of production by the three largest oil companies in the country due to the repair work at their production facilities.
North Caspian Operating Company N.V. (NCOC)  reduced production significantly. According to IACOG, NCOC reduced production to 0 tons in mid-April from 42.5 thous. tons (average daily production in February) and began operating only a month later in May. The company began preparing for the production stop (gradual decline) in March of this year.
In April, repairs (10 days) were also carried out at the second-generation plant of Tengizchevroil LLP, during this period the company produced an average of 26.7% less oil and gas condensate. Within ten days of April, Karachaganak Petroleum Operating B.V. (KPO) also reduced production by 2.6%.
As a result, oil production in Kazakhstan, according to  IACOG, in April significantly decreased to 6.5 mln tons (1,657.0 thousand b/d), which is 15.4% less than in March of this year and 12.5% than in April 2018.
After the completion of various repairs by three major oil and gas companies, the average daily production of oil and gas condensate in Kazakhstan in June reached the level of 258.4 thous. tons per day (7.8 million tons per month), or about 1,963.8 thous. b/d, which, however, is higher than the required level of the OPEC+ Agreement for Kazakhstan (1,860 thous. b/d). 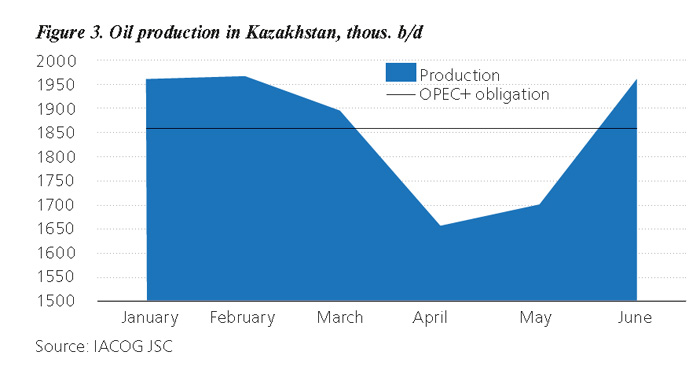 Nevertheless, in general, the average production for the first half of the year amounted to about 1,857.8 thous. b/d, in November 2018 falling by 42.2 thous. b/d, which is 2.2 thous. b/d more than the required OPEC+ reduction Agreement. Thus, Kazakhstan at this stage (according to the results of the first half of 2019) complies with the signed Agreement, designed to reduce supply in the market and stabilize the world oil market.
References: