Anniversary as a start for the dash

This year, KMG International Group, a foreign asset of the national company KazMunayGas, will pay dividends to its shareholder for the first time. In addition to the strategic benefits, including the expansion of the Kazakhstani company to the European market with a capacity of 300 million people, the transfer of new technologies to KMG and high processing of domestic raw materials, the country will receive a direct financial and economic effect from the activities of KMGI. Entering the profitability trajectory is a strong proof of the correctness of the development strategy chosen by the current management of KMGI and carried out transformation and digitalization of business processes. 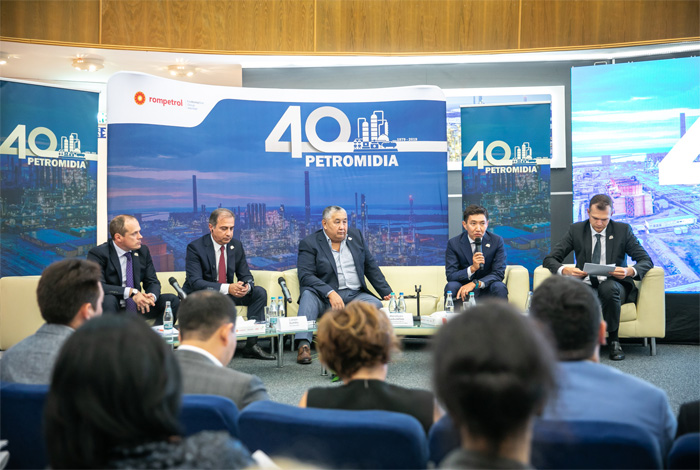 The second breath of the plant
The results of the transformation were summed up in early September in the Romanian city of Navodari, where celebrations were held to mark the 40th anniversary of the Petromidia refinery, one of the key assets of KMG International. It is symbolic that the birthday of Petromidia coincided with the celebration of the 120th anniversary of Kazakhstan's oil in Atyrau – both events are significant for Kazakhstan. One marks the birth of the oil and gas industry, which is the guarantor of the economic well-being of the country; the other marks the entry of Kazakhstani oilmen into the world value-added markets.
In the last 40 years Petromidia is the engine of development of the city of Navodari, as well as the heart of the KMG International Group. We celebrate the anniversary together with the people who were present at all stages of the formation of what Petromidia is today, the plant, which is based on efficiency and professionalism. We are proud of the history and achievements of our plant and want to continue the development of Petromidia together with our main resource – the passion and dedication of employees," – said General Director of KMG International Zhanat Tusupbekov at the solemn anniversary ceremony.
The history of the Petromidia plant began in 1979 with the installation of an atmospheric crude distillation system. Since then, production capacity has grown year after year due to large investments in the development of the plant. After the purchase by KazMunayGas in 2007-09 of the Romanian company Rompetrol, later renamed KMG International, the plant received a second wind. In 2019 alone, KMGI has invested more than $50 million in the installation and debugging of new equipment, as well as in the digitization of the plant. In total, after the company became part of KMGI, the volume of investments in the development of the company exceeded $1.6 billion.
The evolution stages of the plant are clearly characterized by the dynamics of volumes of processed raw materials: about 26 mln tons (1979-1989 years), 23.2 mln tons (1990-2000), 22.6 mln tons (2001-2007) – at the approval stage of mandatory Euro standards and the creation of its own network of retail fuel sales, and finally, 51 mln tons (2008-2018 years) – at the stage of work as part of KMG International. In just 40 years, the plant processed 122.8 mln tons of raw materials.
To date, according to expert estimates, the Petromidia plant is the largest and most modern oil refinery in South-Eastern Europe, as well as the most technologically advanced plant in the Black Sea region. According to the results of a study conducted by Solomon company in 2018, the Petromidia refinery demonstrates the highest yield of light oil products in the region – 86.2% and also occupies one of the leading positions among refineries in Europe in terms of energy efficiency and productivity.
Today Petromidia is the only producer of polyethylene and polypropylene in Romania. This was made possible by virtue of the modern technical equipment of the plant and its petrochemical department. 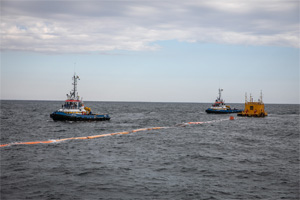 Kazakh energy hub in Europe
Strategically located refinery and a vast distribution network of KMGI allowed the plant to become a true energy hub, capable of covering not only the needs of the domestic market of petroleum products, but also to deliver petroleum products to Moldova, Bulgaria, Georgia, where the fuel is sold under the Rompetrol brand. Fuel from the Petromidia plant is also supplied to 8 more countries.
The constantly growing operational performance of the plant proves that the development strategies of the plant were implemented effectively. Last year, the plant set 11 records at once, achieving historical indicators of raw materials processing (5.92 mln tons), indicators of produced oil products (5.78 mln tons), production of gasoline (1.36 mln tons) and diesel fuel (2.75 mln tons), as well as aviation fuel (317 thousand tons). The plant also achieved a record performance in the use of production capacity (91.98%).
KMG International continues to implement transformational initiatives. We have optimized production processes, retail, corporate business processes. As a result, under the management of KMGI, the Petromidia plant has become one of the best in Europe and the region, which is noted by international experts," – said Zhanat Tusupbekov, General Director of the plant.
Change for Good
After the modernization of the Petromidia refinery in 2009-2012, during which nine industrial facilities were built and modernized, the plant completely switched to the production of Euro-5 standard fuel, productivity increased from 3.8 to 5.9 mln tons of crude oil per year, and the cost of crude oil refining decreased from $28 to $16 per ton.
The construction of the Midia Marina Terminal offshore terminal 9 kilometers from the port of Midia, allowed to pump oil directly from tankers to the Petromidia refinery. The sea buoy and the refinery connected the oil pipeline, part of which is laid on the seabed. This strategic facility allowed the company to save significantly on logistics.
An important milestone in the activities of KMGI was 2013 when there was a change of management, and the new team has developed a large-scale program of transformation of all activities of the company: production, commercial, trading. A new operating model was introduced, business process optimization projects were launched, bureaucratic barriers were eliminated and even a new company brand was developed. The transformation program was called Change for Good and led to impressive results.
Today the plant is the largest oil refinery in Romania and one of the most technologically advanced in the Black Sea region.  The company's production platform includes the Petromidia refinery (production of a wide range of petroleum products), the Vega refinery (production of bitumen and niche products), and the Petrochemicals petrochemical complex (production of polypropylene and polyethylene).
The next stage of technological improvements, after the modernization carried out at the refinery, is the digitization program, launched in 2017. Today, the first stage of implementation of the Advanced Process Control is being completed at the refinery. New technologies will shift to the autopilot part of the control functions at the Petromidia.
Already at the stage of the pilot launch of APC systems at the Petromidia refinery, an economic effect of $1 million was recorded. The total investment in the new technology, which will be implemented in several stages until the end of 2020, will amount to $4 million.
In general, the digitization project of the refinery is part of the company's overall program to create a single digital platform, involving the implementation of about 100 IT projects within five years. These software solutions will improve and integrate all parts of the business chain: from oil refining to trading and retail.
At the same time, KMGI continues to implement programs to optimize and improve the cost efficiency of refining, logistics, and sales. Due to ongoing development and optimization projects, losses have decreased and productivity has increased, which also contributed to the achievement of new production highs. 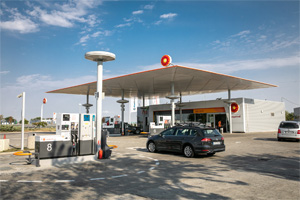 Tasks for tomorrow
“There are a lot of plans for the future. They are related to three main areas. The first is to improve operational efficiency, implement transformation, digitalization and other projects that bring results, and we are very proud of these results. The second area is the implementation of projects within the framework of the Kazakh-Romanian Fund, which we have created, and this Fund has successfully started working. The third direction is that we use the experience of Petromidia in Kazakhstan, implement a project for the exchange of specialists and knowledge” – says the Managing Director for international projects of the national company KazMunayGas Azamat Zhangulov.
In addition, plans are being discussed to further expand the production capacity of Petromidia to 10 mln tons of petroleum products per year by upgrading the existing raw materials processing unit or building new ones. According to Azamat Zhangulov, the question of doubling the refining capacity of the Petromidia refinery is directly related to plans to increase the production and export of Kazakhstani oil.
"Now the level of production in Kazakhstan is about 90 million tons per year. The plans for the next five years are to increase to 110 million tons. Today we are discussing various plans for the disposal of this oil. There are many different questions about what is better – to refine or to sell crude oil, which will be the distribution of demand. These issues are being discussed. From the point of view of modernization costs, perhaps the expansion of the capacity of Petromidia would be the cheapest way to increase the volume of refining. But further decisions will be made taking into account the full range of factors," – he said.
KMG International is also ready to start work in this direction. According to Saduokhas Meraliyev, the Chief Operating Officer of the company, "homework" on the technical feasibility of this project has already been done.
However, the topic of doubling capacity is discussed only at the level of plans. Among the already implemented initiatives of the company, on which the group relies and directs investments is a project to further expand the network of Rompetrol gas stations in Europe. In the near future, the network plans to increase the market share in retail in Romania from 16% to 24%, in Moldova from 24% to 30%, in Georgia from 17% to 25% and in Bulgaria from 3% to 12%. In Romania, it intends to open more than 70 gas stations at the expense of greenfield (construction from the zero cycles). The project is estimated at $100 million, and funding will be provided through the Kazakh-Romanian Investment Fund.
As part of the further development of the refinery, KMG International plans to implement a full transition of the plant to Smart Refinery technology and build a cogeneration CHPP on its basis. In addition to the transition to Euro-6, the company plans several important and innovative projects: such as the development of a new bitumen station, which will double the annual production, alkylation station, which will help to increase production capacity for gasoline, as well as dewaxing plant, which will produce diesel fuel suitable for temperatures of -35 degrees Celsius.
If we talk about the strategic business goals of the company for 10-15 years, it is assumed that the further gradual development of KMG International as a key player in the Black Sea basin and Eastern and Central Europe. In particular, projects to increase the retail network of gas stations in Romania and the region identified as the most promising areas. The company also sees promising opportunities for further development in the field of petrochemicals, the use of renewable energy sources and downstream integration with operations in exploration and production.