In 2019, Boehmer Armatura plant for the production of ball valves celebrated its 5-year anniversary. It is no secret that many potential investors are closely watching the investment experience of BÖHMER – the eminent German manufacturer. Andreas Kaefer, Director of the plant, tells the story of production, challenges and first successes during this time.

Today we want to present our company, Boehmer Armatura LLP, a plant for the production of ball valves constructed according to the State Program of Accelerated Industrial and Innovative Development of  the Republic of Kazakhstan in the Saryarka Free Economic Zone of Karaganda city by German investor, Boehmer GmbH. Boehmer GmbH family enterprise originates back in 1956 with the design and production of safety shutdown valves for the mining industry. Over the years,  the company, consisting of several people, has grown into a company with an international name, producing its equipment in four factories in three countries, Germany, China and Kazakhstan and supplying it to 38 countries.
After two years of intensive construction, plant in Kazakhstan was put into operation on July 2, 2014. In parallel with the construction of the plant, training of Kazakhstani employees of the plant under construction was conducted at the head enterprise in Germany, equipment for future production was purchased. Today we are proud of our specialists, who are not inferior in their knowledge and ability to the colleagues from the parent enterprise, as well as the fact that our company is equipped with the most modern equipment. This allowed us to start implementing the plans, and first of all, of course, the real production immediately after the launch of the plant. Over the past five years, the company has passed many stages of development, from the production of ball valves for heat supply to ball valves manufactured according to one of the most complex and recognized standards in the global oil and gas industry, API 6D, Spec Q1. All audits and certifications were carried out by worldfamous companies such as Buro Veritas, specialists of the American Petroleum Institute, etc.
The production line of our plant is continuously expanding, and today we have come to the production of ball valves from DN 15 (1/2 inches) to 1200 (52 inches) mm., with pressure up to 420 bar (ANSI Class 2500), both fully-welded and split body. The equipment produced by us is used in various fields of industry: oil and gas pipelines, oil and gas storage facilities, petrochemicals, thermal and steam power, shipbuilding (gas and oil tankers), heat supply, etc.
After Boehmer Armatura has certified its production according to the API 6D and Spec Q1 standard in August 2016, with the direct support of the Ministry of Energy and its authorized body PSA LLP, cooperation with the largest oil and gas operators of Kazakhstan (NCOC, KPO, and TCO) has started. Considering that the above operators focused their work on the world’s highest technology and standards, we initially understood the complexity of all the upcoming procedures for pre-qualification, joining their registers of suppliers; thus we patiently practiced and still practicing all the necessary procedures: numerous audits conducted, including the Chevron Technology audit, trial orders production, etc. At this stage, we were able to fully appreciate the significance and importance of colleagues from departments in the development of local content, which were always there in all situations highly professionally presenting our interests at all possible levels. Today, taking this opportunity, we express our gratitude to all those who showed, first of all, goodwill and interest in the development of domestic oil and gas engineering. During this period, a lot of work has been done with each of the operators. More successful with some, with others everything progresses more slowly, but in general, there is an overall positive dynamics in the development of relations. 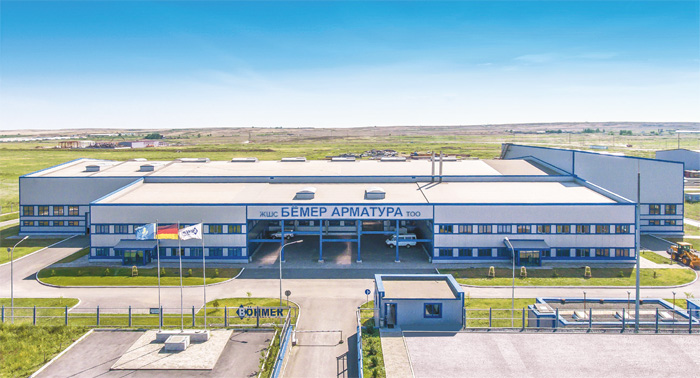 We managed to achieve the most significant results in joint work with NCOC, 242 valves of different diameters and pressure were recently delivered to their objects. One of the critical events that qualitatively influenced the development of cooperation, was the event organized in the fall of 2018 by the leadership of the Karaganda region and NCOC. During this event, the Memorandum for the support and development of local producers was signed between the Karaganda region and NCOC. As part of this event, a contract was signed between NCOC and Boehmer Armatura LLP for the supply of Class 150 ball valves, for the first overhaul of NCOC (April 2019), which was completed on time. Today, the analysis is conducted regarding the possibility of long-term cooperation in the form of signing long-term contracts, participation in early tenders.
Some progress has also been made with other oil and gas operators, and today we expect more dynamic development. Thus, a trial contract to supply ANSI Class 600 ball valves was signed with KPO and and already carried out. Delivery is complete, and we are waiting for the test results and building further plans to work with KPO.
A great job was done with TCO, which resulted in the technical audit conducted by experts of Chevron ETC, Houston at the end of last year, both at Boehmer GmbH parent company in Germany and Boehmer Armatura LLP in Karaganda. According to the results of this audit, the technical parameters of the valves for the trial order were agreed, on the implementation of which we are working currently.
And, of course, all of the above work would be impossible without constant additional investment in the further development of our company. To meet the requirements of customers, over the past period the company acquired another test-bench – VALVE TEST BENCH Model PZ-L300, designed for the pressure testing of ball valves with diameters from DN 0.5” to 12” with the ability to test up to three ball valves simultaneously, which will reduce the testing time by 3 times. The testing process takes place in automatic mode, the conclusion about the air-tightness of the tested valves and the corresponding report is also issued automatically by the test-bench. This option eliminates the possibility of human factor influence on the test results.
In addition, the issues of modernization of production and acquisition of the following equipment have been worked out: 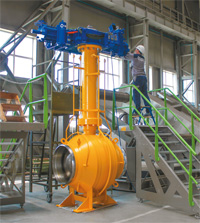 In case of obtaining long-term contracts or participation in the procedures of early tenders, our company has the opportunity and is ready to invest its own funds to purchase new or upgrade existing equipment to meet all the technical requirements of the customer entirely. Also, application of the above forms of work, which give the possibility of the production planned development, stability, will accelerate the final decision on the construction of the second stage of the plant.
Despite all the successes mentioned above, I would like to note that the progress through all the labyrinths of various pre-qualification and audits is very slow, taking years. Years of uncertainty, high financial costs, lack of guarantees for employees, etc. And this is all in the case of our company, which has the world-famous German parent company with advanced technology, great financial support. I can imagine how hard such work is for Kazakhstani producers who do not have all this! It is necessary to look for new ways of integration of domestic producers both in the projects of oil and gas operators of Western Kazakhstan, as well as in the projects of State institutions, divisions of Samruk-Kazyna. One of such ways, in our opinion, could be more individual support of companies- candidates for the right to supply their equipment from potential customers. Development of interim plans, regular monitoring of their implementation, the introduction of adjustments, etc. And, of course, full information on the ongoing processes in the industry is needed, which was mentioned by the Prime Minister at a meeting on the development of oil and gas engineering on 17.07.19 in the city of Atyrau. After all, today the lion’s share of all supplied equipment for this industry is carried out by specialized foreign companies offering complex deliveries at prices (since they buy equipment in large quantities) with which no domestic producer can compete, and no one knows anything about it explicitly. Also, in a constant mode, various kinds of design work are carried out both on newly developed projects and on the modernization of old ones, about which it is also challenging to obtain any information. But it is at this stage that the fate of the technical content of the project is decided, and if the parameters of foreign manufacturers are laid here, it will be almost impossible to change something. In general, it should be said that, unfortunately, today Kazakhstani producers are not protected from foreign suppliers. Even within the framework of the Eurasian Economic Union, where equality of suppliers who are members of the Union. IS provided, internal barriers are actively created. First of all, it concerns the market of the Russian Federation. 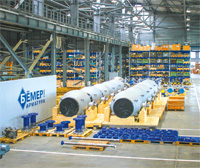 While Russian producers have unlimited opportunities in our market. For us, for example, to supply to the oil and gas sector of the Russian Federation, it is necessary to undergo, often very complicated and expensive, prequalification procedures, which do not give any guarantees for the supply of equipment. For example, to supply our equipment to Gazprom structures, you need to enter the register of Gazprom suppliers. Before you had to make the valves, at least three different types – DN 100, 300 and 1000, deliver them to Saratov on the Gazprom testing range and pass a test there. With a positive result, the company was added to the register for three years. After three years, everything was repeated. Such a procedure, in the ideal scenario, cost us 110 million KZT. Now it is even more complicated. Gazprom designed and implemented INTERGAZSERT certificate. Receiving one is a process that involves four stages, including receiving Gazprom QMS, product tests, etc., occupying more than a year under the optimal passage of all stages, and that will cost us, if we want to certify the entire product line, up to 175 million KZT! The same, albeit in a simplified form, should be done in Rosneft, Transneft, and many other structures. It is clear that with the introduction of such barriers, we are almost cut off from these markets. I would very much like for the working conditions in the markets of the Eurasian Union to be equal, ensuring a healthy market environment. These days, our country celebrates an important date – the 120th anniversary of the oil and gas industry. We take this opportunity to congratulate all the people involved in this industry on this significant date, to wish everyone well-being and further prosperity, to thank those who in the distant years stood at the origins of this industry and left us such a rich heritage!