Nikolay Gorban, CPC «We Have Started the Debottlenecking

In an interview with Petroleum, General Director of the Caspian Pipeline Consortium Nikolay Gorban talks about the results of last year's work and plans for the medium term 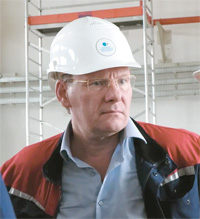 –  Mr. Gorban, what were the results for the Caspian Pipeline Consortium in 2018?
– Last year, the CPC system shipped 61.084 million tons of oil total, which is 10.8%, or 5.976 million tons more than in 2017. Thus, a new production record was set! Of this volume, 54.3 million tons were shipped by Kazakhstani shippers. Most of the oil in the system came from the fields of Tengiz (28.7 million tons), Kashagan (13.2 million tons) and Karachaganak (10.3 million tons).
The peak month for indicators was December 2018, when 5,954 million tons were shipped. In total, 558 vessels were processed during the year, 55 of them in December.
April 8, 2019, a significant event took place at the CPC Marine terminal – a 600-million ton of oil was shipped for export. Let us recall that the previous important production milestone of 500 million tons was overcome less than two years ago, in August of 2017. These are serious achievements of the entire consortium team, which operates extremely reliably, accident-free, without incidents, in full compliance with the norms of labor protection, industrial and environmental safety.
CPC's revenue for 2018 amounted to 2.19 billion USD under IFRS (consolidated revenue of CPC-R and CPC-K. Profit after tax is 322 million dollars (CPC-R and CPC-K). EBITDA was $1.16 billion, EBITDA margin (approx.: the percentage in relation to revenue) is 53%.
In 2018, CPC paid 31.285 million KZT of taxes in Kazakhstan, excluding mandatory pension contributions, social charges, and contributions to health insurance.
– What are your expectations for shipping in 2019?
– In 2019, the general collective application of shippers for a record 67.7 million tons was received. At the same time, the figure as of June, taking into account the actual delivery – 65.1 million tons, of them: Kazakhstan – 57.7 million tons, Russia – 7.4 million. The total volume of Kazakhstani oil supplies from Tengiz should amount to 29.9 million tons, from Kashagan – 15.4 million tons, and Karachaganak Petroleum Operating consortium announced 10.2 million tons. Another 2.2 million are expected from other local shippers.
– You said earlier that the consortium adheres to the principle of trouble-free operation. Have there been any reported oil spills or other emergencies in CPC-K?
– Indicators on labor protection, industrial safety, and environmental protection are as follows. As of June this year, CPC-K has worked 21,362,091 hours without accidents and 10,443,602 kilometers without registered accidents (note: as of the end of May 2019).
We have zero Indicators of mortality related to the production, accidents with loss of working capacity, oil spills on water, and fires on the objects.

– We see that the share of Kashagan oil in the total volume of the shipping increases from year to year. It is known that by 2024 the North Caspian Consortium plans to increase production from 330 to 450 thousand barrels a day. What part of the additional volumes will go to CPC?
– We would like for all the volumes to go to us, but the shippers and shareholders make decisions, we are carrying them out.
– Did you receive an official application for an increase in shipping from Tengiz after the completion of the expansion project there?
– Suffice it to say that the CPC shareholders, who are also part of Tengizchevroil, approved the Caspian Pipeline Consortium Debottlenecking Program.
– What year is the increase in the shipments expected?
– The increase in volumes from Tengiz is expected from the second half of 2022.
– Is there an understanding of the further prospects for shipments?
– There is an understanding, and it is based on five-year forecasts and maximum ten-year forecasts.
According to the received forecast applications of shippers, it is expected that the volume of oil supplies from the Republic of Kazakhstan to the CPC will exceed the current mechanical capacity of the CPC pipeline system, starting from 2022.

In this regard, the Caspian Pipeline Consortium needs to modernize several pipeline system facilities. The purpose of modernization is to optimize the current capacity of the oil pipeline system, obtained through the implementation of the Expansion Project.
These measures will ensure the flexibility of the operating modes of shipping facilities and the possibility of receiving additional volumes of crude oil from the territory of the Republic of Kazakhstan, with the optimal amount of DRA (note: drag-reducing agents) and elevated ratios of the pipeline operation.
After the implementation of the program, the capacity of the system will ensure the transportation of oil from the territory of the Republic of Kazakhstan to at least 72.5 million tons per year.
Works within the DBNP (note: Debottlenecking Project) will take place at the almost all area of the CPC facilities (pump stations and the Marine terminal). Modernization of the infrastructure of the oil pipeline is not included in the scope of the program.

Within the framework of the CPC Oil Pipeline System Modernization Program, works on the station modernization are planned at the Atyrau PS, including the construction of a new main pump unit. At the Tengiz PS, the possibility of upgrading the oil metering unit, replacement of three mainline pumps, the installation of several booster pump stations, construction of two tanks with a volume of 20,000 cubic meters, the construction of substations, transmission lines, modernization of protective switchgear, etc., are considered.  At A-PS-3A and A-PS-4 in Kazakhstan, it is planned to replace the MPU impellers (note: main pump units). Completion of the program is planned before December 2023, investment costs for the period 2019-2023 will amount to 599.9 million USD, of which CPC-K – 156.4 million dollars, CPC-R – 443.5 million. I want to note that the number of investment costs was calculated before the pre-project study, engineering surveys, and design work, including the number of unforeseen costs to take into account this circumstance.
– What are the plans for the investment program for 2019? Can you announce the total amount allocated for the modernization of equipment, new construction, if any?
– The approved capital expenditure budget for 2019 is about 50 million USD, including: CPC-R – 32 million, and CPC-K – 18 million dollars.
Within the framework of the approved budget, a program of technical re-equipment of security systems of CPC facilities is being implemented.
Among them are following objects in various stages of implementation:
– After the increase in the volume of Tengiz and Kashagan oil shipping, will the properties of the CPC oil grade change?
– The CPC does not expect serious changes in the qualitative characteristics of the CPC composite. By indicators, the data are as follows: API – 46.5 (average for the year is 46.4). Sulfur – 0.55 (average for the year is 0.56).
– What amount will CPC direct on the repayment of debt to the shareholders in 2019? How much was paid in the first quarter?
– In the first quarter, CPC assigned $364 million to pay the debt, in the second quarter – $261 million, estimated that in 2019, the shareholders would be paid $1.4 billion. But it all depends on the volume of shipped oil.
– Does CPC-K provide social support to the local community in Kazakhstan? 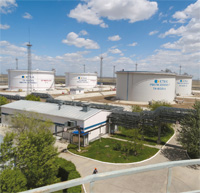 – Being a socially responsible company, CPC-K allocates significant funds for sponsorship and charity. In 2018, we implemented such projects in Kazakhstan for a total of 4.6 million USD. A significant part of the implemented projects was financed from the CPC Expansion Project budget. In particular, this money was used to reconstruct the Victory Park in the village of Makat, to build kindergartens and schools in the Atyrau region, to support the poor and socially vulnerable segments of the population.
The planned budget for the current year is 2.4 million dollars (1 billion KZT). The following projects will be financed: start of construction of Children's Village and Youth House; "CPC for talented children"; assistance to the poor; environmental program to save saiga and others.