The Pre-Caspian Gas Pipeline Has Been Frozen 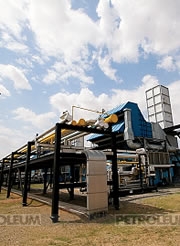 The estimates of Kazakhstan to earn money on the transit of Turkmen gas via the territory of Russia have not come true. At the same time it is clear that those volumes of gas which Kazakhstan planned to direct to the Pre-Caspian pipeline system for further flow to Europe will be developed in the opposite direction – to the southern neighbour, China.

One of the results of the October 2010 visit of the President of the Russian Federation Dmitry Medvedev to Turkmenistan became a decision to freeze the project for the construction of the Pre-Caspian gas pipeline the agreement on which was signed in December 2007. (see «Round the Sea», Petroleum ?1-2008, or www.petroleumjournal.kz). It was supposed then that this pipe with a capacity of 20 billion cubic meters in future will be linked with a gas pipeline South Stream that will make it possible to lead the Central Asian gas to Europe through the territory of Russia.

The plan envisaged reconstruction in 2009-2010 of the old pipeline Central Asia - Center-3 from the Turkmen town of Begdash to the Kazakhstan town of Beineu with the expansion of capacity up to 10 billion cubic meters a year. At the second stage – in 2010-2017 – the construction of the new gas pipeline to Aleksandrov Guy on the Russian-Kazakhstan border with a throughput capacity of 20 billion cubic meters a year. As a result, the Pre-Caspian pipeline system would be formed with an annual capacity of 30 billion cubic meters of gas against 0.46 billion pumped in 2006. It was planned that each country will fulfil works in their territories independently at the expense of own investments. Turkmenistan was obliged to build 400 km of the pipe; Kazakhstan – 1.5 thousand km. Russia was responsible for jointing the pipe in the Russian territory at the exit to Russia in Aleksandrov Guy.

However, the start of the project implementation was postponed several times. Igor Sechin, vice-premier, curator of the Russian fuel and energy complex, has commented on the decision to freeze the construction of the Pre-Caspian gas pipeline after the visit to Ashkhabad: «We have approximately the same estimates of the European market of consumption. In the next three-four years it will grow insignificantly. So, it will be difficult for us in the nearest years to increase the export deliveries to Europe.»

«The document was signed in 2007 when the market was hungry. And Russia was ready to buy gas in Central Asia and let it go via its territory in order to remove competitors,» considers Valery Nesterov, analyst of the Russian investment company Troika Dialogue. But now we have gas overproduction as Europe is filled up will cheap LNG. In this situation, even South Stream, if built, will be needed only to redistribute the flows, but not to pump gas from Central Asia.»

Kazakhstan in this project should objectively follow the line of Russia’s policy though it bears from it both geopolitical and economic losses. «Freezing of the Pre-Caspian gas pipeline does not respond to the interests of Kazakhstan,» stated in an exclusive interview to Petroleum Igor Ivakhnenko, deputy editor-in-chief of Neft & Capital magazine. Firstly, Kazakhstan loses the prospects of getting incomes from the transit of Turkmen gas. Secondly, it cannot increase its political role as a transitter of the big volumes of gas to Russia and Europe. And thirdly, Astana loses a trump card in the struggle for the access to the Turkmen hydrocarbon resources which it would receive in case of building and operating the Pre-Caspian gas pipeline. Arguments that the alternative to the Pre-Caspian pipeline - the Transcaspian gas pipeline - can serve to Kazakhstan in the export of its own gas to Europe, bypassing Russia, are unpersuasive. Ashkhabad will not give space in the Transcaspian pipe for the Kazakhstan gas.»