The history attributes the classic phrase “who owns information - owns the world” to the famous man Rothschild Natan. However, in the 21st century, in addition to being informed, the critical advantage is the speed of its transmission.

Twenty years ago, in the independent Kazakhstan the autonomous economy had been recovered, and the banking systems had developed, a team of specialists formed the Arna Sprint Data Communications company in the field of communication. Young talented engineers, who were able to forsee to the future, aimed to build the first of its kind firm in the country history, a data network on a national scale. Today, after 20 years, it is safe to mention that all the plans and objectives have been fulfilled with the help of energy, assurance of success and creativity.

The KazNet data transmission network for the general use was built and put init operation. Its development further, in the future, was to build a private multi-service telecommunication network using the advanced technology, equipment, the high-speed digital satellite and landline communication channels. Now Arna Sprint Data Communication the legal successor of JSC ASTEL is one of the largest non-State communication operators of Kazakhstan.

In a few words, the purpose of the company is to establish a stable connection from any part of the world. Using the systems of leading manufacturers, the company ASTELoffers its customers a wide range of high quality services, which include: network solutions and data transmission services, satellite communication services, wireless access, broadcasting and telephony, Internet access, system integration and system delivery, as well as the development and implementation of other projects of any complexity.

Working closely with customers, and considering the essentials of their business processes, as well as the individual requests, the company is constantly evolved by providing solutions that meets the most demanding requirements of its clients. The another advantage of the company is that the clients of ASTEL, in addition to the service offered, can receive the 24/7 technical support.

Also over two years ago, the company has increased the range of their services by launching the portable satellite communication system of rapid deployment. Its main components are the compact portable satellite terminal (VSAT) which is a shock-resistant, dust and dam-proof case and the rigid high-strength satellite dish. This complex constructive solution allows just in a few minutes to generate an assembly done by one person’s power and establish a link from the base point with an environment of temperature ranging from -40°C to +60°C without using any additional tools.

The equipment, embedded in the terminal allows to manage telephone connections with subscribers of corporate communication, as well as  the ability to make calls over to a public network, data transmission over IP, both within the corporate network and Internet access to the speed up to 2 Mbit/s, the transmission of a video signal via a satellite channel from wired video cameras, or camera directly connected to the Terminal. It is also possible to receive video signals from wireless cameras up to 5 km radius and it can be relayed through satellite channel, from the satellite channel to inline and/or on an external display and a wireless network (Wi-Fi) with a range of up to 200 m.

The complex comprises the support for quality control mechanism of the service (QoS), which makes it possible to organize a video conference simultaneously with the data transmission, IP telephony and any other applications, critical transmission band. The equipment also enables to secure the private networks (VPN). The complex can be used by the emergency response service, the organizations, involved in emergency response.

It is also capable to be used in the oil works, by the drill workers and other specialists in the oil and gas industry, working in the places, where the normal network is highly unavailable. It is well known that within the framework of their specialty, the oil companies work on such an algorithm: searching, prospecting, exploratory drilling, and then moving to the stationary management. It is clear that all of this is linked to the changing of location, and therefore the need for consistent communication is required at any time in various locations.

Therefore, this tool is required for the communication in the oil and gas industry. The second: in the process of the oil and gas pipelines development, you can control, for example, the safety, the environmental condition, the security, in general, or the potential emergency. In these cases, you can quickly deploy the communications systems in place, and transmit a voice message and along with a picture.

The complex is very important to be used during the localization of various emergencies, particularly in relation to the environment. For example, during the oil spill (the risk of extraction of the oil in Kazakhstan belongs to the critical class) the rapid exchange of information will be evaluated. In such cases, the evaluations goes on minutes, and each minute is important as it brings the specific financial losses to the the person behind of the accident. One of the conveniences of this complex is its size. It can be placed within two or three suitcases (depends on package), which is easy to carry with anyone. 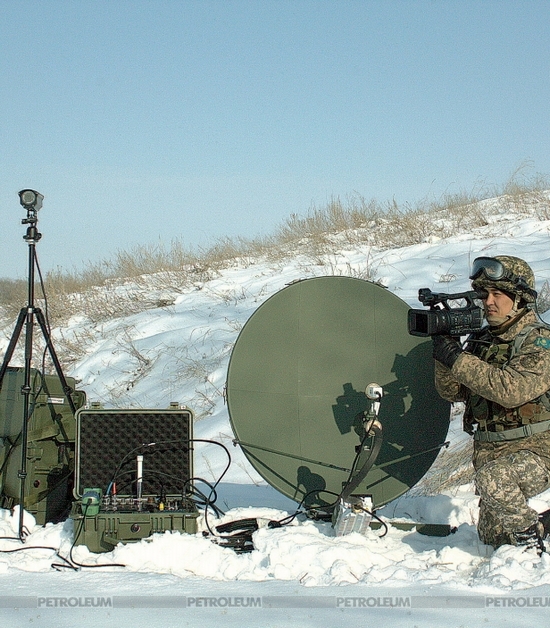 The second important objective is that the company ASTEL has joint projects, connected with the development of communication systems for vehicles. The model of the car is not important, starting from the model Niva and ending with Kamaz or Ural. All of them work on the customer’s demand and wish. These systems are called command-staff vehicle in military. Externally, it looks like: KAMAZ with the shelter, self-discharging antenna in the top, inside the shelter is the information system with all necessary equipment for communications, starting with radio, satellite modem and remote cameras.

By the way, around the shelter, as well as the portable complex, there is the Wi-Fi zone. The similar command and staff autocomplex is actively used by the oil companies. Such machines are equipped not only with remote cameras, but also with the external cameras, which is located on the tower about 3-4 meters high, that allows you to make and transmit the perfect picture. In fact, it makes possible to monitor the production process online. According to the company report of the ASTEL, they have been selling similar complexes for about two years. The components of the equipment are different and of various products ranging from American antennas, Israel modems to their own inhouse integration blocks, software for switching channels.

The oil and gas companies are one of the major corporate customers for ASTEL company. The office in Atyrau that  functions ever since the startup of the company, is the leader amongst the regional competitors. Over the decades, the company staff in the Atyrau office practically did not change. And that means they are not just professionals, but also an experienced experts of the specifics of the skills.

The list of the old clients of the ASTELcompany includes companies from the oil and gas sector, as KazTransOil, Petrokazakhstan, Tengizchevroil and many others. One of the key clients is the Agip KCO, to which the ASTEL company has developed and successfully implemented the project of satellite voice and data transmission channels, as well as wireless communicatoin system for the stationary and mobile offshore installations in the Kazakhstan region of the Caspian shelf.

The company provides a complete package of services for all of its clients. The technical support is provided and offers a one-year warranty (for the prevent and repair service as necessary at least twice a year) after the sale, and then the contract is signed on an extended warranty. The field works to the customer locations is also included. The company has its offices, cars, labour forces and workforces to do this, in all the regions of Kazakhstan.

In conclusion, it is safe to mention that whatever the client demands the ASTEL, they would never hear the word “no”: the ASTEL will solve any problem.