National company "KazTransGas" implements the order, issued by the President of Kazakhstan on gasification of Astana and the northern regions of Kazakhstan. The meeting of the Kazakhstan-British Intergovernmental Commission on trade-economic, scientific-technical and cultural cooperation took place in the course of the visit of President of the Republic of Kazakhstan Nursultan Nazarbayev to the UK. Within the framework of the meeting, Memorandum of Understanding has been signed between «KazTransGas» JSC and the British Independent Power Corporation PLC.

Kairat Sharipbayev, Director General of «KazTransGas» JSC, and Peter Earl, President of the Independent Power Corporation PLC signed the document. The Memorandum provides for the construction of four gas-turbine power stations along “Saryarka”, the planned main gas pipeline, designed for gasification of Astana, the capital of Kazakhstan, and for northern and central regions of the country as well.

The document states that British partners undertakes to finance the construction of 4 gas-turbine power stations in Astana, Karaganda, Temirtau and Zhezkazgan, with nominal capacity of 400 mW each.  Target investment amount shall be 3.1 billion USD. 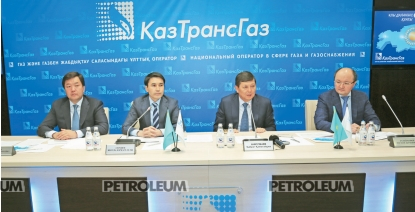 “KazTransGas” JSC, for the account of investment from Independent Power Corporation PLC, will construct “Saryarka” main gas pipeline, from “Beineu-Bozoi-Shymkent” main pipeline to Astana, and will ensure the gas transportation and supply to gas-turbine power stations.

President Nursultan Nazarbayev instructed to gasify Astana and northern and central regions of Kazakhstan in his Address to the nation in the year 2012. Since then, “KazTransGas” has done a great work on choosing the best economically and technically viable options for the project’s implementation. As a result, the most efficient construction option was chosen, with the use of existing pipelines currently kept in conservation. It shall allow reducing sufficiently the cost of the pipeline construction and setting comfortable gas price and rates for consumers. Generally, the project’s economic, social and environmental importance cannot be overstated. First, citizens of the capital and nearby regions will get an access to cost-efficient and convenient heating system. Second, the electricity production will be increased in the North that allows exporting a part of it. Third, natural gas is greener than other fuels, hence the air in major cities and the capital will be much cleaner. 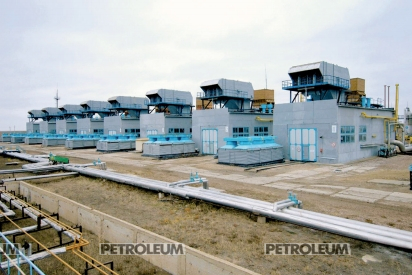 "Attracting such a large investor in the project was made possible thanks to the personal involvement and influence of the President of our country," said Kairat Sharipbayev, Director General of KazTransGas JSC, commenting on the signed Memorandum. “Indeed, in a time when the global economy is experiencing difficulties, investors will come only in stable countries.”

Throughput capacity of "Saryarka" main gas pipeline, from the compressor station «Karaozek» of the main gas pipeline “Beineu-Bozoi-Shymkent”, to Astana, will count for 10 billion cubic meters.  The next step will be construction of a gas pipeline from the capital to Kokshetau, Petropavlovsk and Kostanay. KazTransGas will provide transportation and supply of about 2.1 billion cubic meters of gas for gas turbine power plants, and remaining volumes of "blue fuel" will be delivered to enterprises and the public. The more consumers along "Saryarka" route will appear, the less the cost of fuel will be set. It is important also, that only Kazakhstan companies will implement all construction works during the project. This means jobs for Kazakhstan people will be created in the difficult time from economic point of view, as well as taxes and deductions to the budget, and orders for local manufacturers will be made. It is expected that the share of local participation in the project shall be at least 90%.

Mr. Sharipbayev noted that various options were considered to execute the President’s order. One of them involved the construction of a gas pipeline to Astana from Kostanay. However, since there is no domestic resource base, the route was revised. "With the support of the head of State, construction of “Beineu-Bozoi-Shymkent” gas pipeline is carrying in our country". Through this project, energy security of Kazakhstan is fully guaranteed. It eliminates the need to purchase imported gas for the need of southern region, said the chief of “KazTransGas”. Another important factor is that the main gas pipeline shall connect together the entire gas transportation system in the Republic of Kazakhstan. In November of this year, the linear part of the stretch Beineu-Bozoi (311 km) is being put into operation, and gas will start to be transported through it. Due to that, it became possible to supply Kazakh gas from western regions to the South, as well as through "Karaozek" compressor station in Kyzylorda region to the North of Kazakhstan. As a result, the best pipeline design and route have been opted.”

The new route is more appropriate also in terms of resources: TCO, “CNPC AktobeMunayGas”, and many other small gas production facilities in the West of the country can supply gas from Karachaganak and Kashagan fields. Therefor, it will be not necessary to import "blue fuel".

International Power Corporation Plc (IPC) is one of the leading power developers and power plants operators of the United Kingdom. Founded in 1995, IPC has developed, owned or operated 7000 MW of thermal and hydropower generation facilities in North America, Latin America, South Africa, Asia and Europe.

IPC operates power plants for third parties, such as BP, and has qualified to operate plants owned by BG, Lukoil and Shell, as well as qualifying for projects funded by multinational lenders including the Asian Development Bank (ADB), the European Bank for Reconstruction and Development (EBRD), the Andean Development Corporation (CAF), and the International Finance Corporation (IFC), the World Bank’s subdivision.

KazTransGas JSC (KTG) is the main gas energy and gas transportation company of the Republic of Kazakhstan, representing the State's interests on both domestic and global gas market. The sole shareholder of KazTransGas JSC is National Company “KazMunayGas” JSC. The company operates a centralized infrastructure on transporting of commercial gas via main gas pipelines and gas distribution networks; provides international transit and sells gas on domestic and foreign markets, develops, finances, constructs and maintains pipelines and gas storage facilities. In accordance with Government Decree No. 914 of July 5, 2012, KTG was defined as the national operator in the field of gas and gas supply.