In the beginning of October Almaty hosted the annual oil and gas events for twenty-third time: 23-th International Conference "Oil and Gas" KIOGE-2015 and the International Exhibition KIOGE-2015. Vice Minister of Energy of the Republic of Kazakhstan Magzum Mirzagaliev stated, when opening a plenary meeting of the Conference: “KIOGE is a right place to reach agreements and a springboard for implementation of promising projects. I am sure that today's meeting is no exception and it will provide the latest updates regarding the developments and technological solutions in the oil and gas industry, ensuring an effective exchange of experiences on the most important issues and it will make a constructive impact on use and application of new ideas and achievements in the oil and gas industry.

KIOGE-2015 Conference once again became an important platform for discussing the difficult situations, occurring presently in the energy markets. It is worth noticing that given all the complexity of this issue, the experts are not inclined to dramatize it. 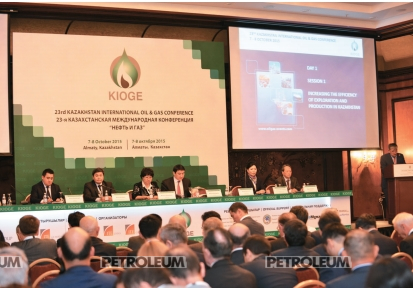 Therefore, the report of Magzum Mirzagaliev stipulates that, according to the International Energy Agency, the annual oil consumption will grow by more than a third by 2030. Although the consumption growth will slow down further, the dominant role of oil and gas will be maintained in the global energy balance. A kind of reaction to the difficult challenges is the fact that this year the Conference format turned to be more technical and technological: already the first session had come specific issues on the industrial development issues, such as the ways to increase the oil production. In particular, it is justified by the processes, mentioned by the Vice Minister of Energy in his speech: "Today, the world stands on the threshold of understanding that the “easy-to-reach” oil is gone, and as the experts believe, the major oil and gas resources of the Earth are located at depths of 7-15 km. Development of the oil and gas industry of the country was mainly ensured through the fields of Pre-Caspian basin, where 75-80% of hydrocarbon resources are concentrated. However, in 15-20 years, a decrease in production is expected at the largest Tengiz, Karachaganak and Kashagan fields and in Kazakhstan as whole. It is possible to replenish the resource base only the exploration of deepwater horizons, with probability to discover two dozen large (more than 300 million tonnes) hydrocarbon fields.

According to Nurtas Shmanov, the Deputy Chairman of the Board of NC KazMunayGas JSC on Service Projects, today the industry faces several challenges. It concerns the need in large-scale searches for oil and gas at lower geological horizons. "It's not even a big scope of works, it is rather a huge one. The long and laborious joint work. But the potential forces that are present in the Republic and the outside partners will allow us to reach these horizons ", said Mr. Shmanov. The Conference enables the discussion of next steps for this work.

Murat Munbaev, General Manager, Strategic Planning and Analysis Department, Tengizchevroil focused his report on the updates of Tengiz field development, which became a catalyst for the growth of Kazakhstan's service industries,  Bazar Eskozha, Chief Geologist of "North Caspian Oil Development spoke on the geological exploration prospects in Kazakhstan. This expert, well-known and respected among the peers, presented the subsoil use prospects of the Mesozoic formation, which can resolve a task of preventing the oil production decrease in our country. 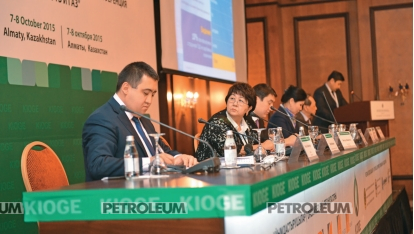 Within the frameworks of the Conference, the speakers discussed the legal mechanisms to mitigate damages, saving the valuable personnel during the crisis and use of the locally produced technologies. A separate day  was dedicated to transportation and supply diversification, optimisation of business-processes, protection of the environment and limiting the harmful emissions.

During two days, the Conference was attended by more than 350 delegates, among them are the top-managers, heads of structural subdivisions, geologists, geophysicists, engineers, developers, technical director, business development managers, ambassadors and heads of diplomatic missions, trade representatives of different countries and other experts.

At the same time, the Almaty Center of Business Cooperation "Atakent" hosted the exhibition with more than 350 companies from 25 countries of the world, engaged in the activities from exploration and production to refining and consulting. Austria, Germany and China had their national stands. For four days, the exhibition was attended by more than 4000 industry experts.

The developers of technologies for injection, oil&gas storage and transporting, manufacturers of measuring instruments, pressure and temperature sensors of the last generation and others  presented their products at KIOGE-2015.

German exposition was presented by the Federal Ministry of Economy and Energy in cooperation with the Association of the German Trade Fairs in Germany, with the support of the Union of Machine-Builders of Germany.  Monika Hollacher, Head of CIS Department, VMDA, said: "We are presented here in the frameworks of the program of the German Ministry of Economics, which is aimed at supporting the mid-sized businesses, not having an opportunity access the independent foreign markets, particularly those, far away from Germany. Here, at KIOGE, we represent 26 companies from different industries. In particular, the manufacturers of pumps, valves, offshore platforms, various power equipment and technology services”.

China was well-presented at the exhibition due to its numerous companies. Including various regional and specialised units of CNPC corporation. So, for the first time  Xinjiang oil design and engineering institute exhibited at KIOGE.

If in the early 1990 's, at the dawn of the exhibition, mainly oil companies have participated, but in recent years, more and more manufacturers can be seen among the participants, and they are not only from Kazakhstan. One of the most visual stand at KIOGE-2015 has become a stand of Russian company "Ozna", involved in production and engineering of the oil and gas equipment. Its representative Olga Shokurova highlights: "We always take part in KIOGE. In Kazakhstan our company has been operating for many years, and we intend to stay here in future”.

VELAN company, the largest Russian manufacturer of explosion-proof electrical and industrial performance equipment, had shown a computer and wireless Wi-Fi hotspot in explosion-proof design for the first time in Kazakhstan.

At the stand of the company IEC TELECOM Kazakhstan  three innovative solutions were presented for the voice and data transmission, new solutions -Thuraya Atlas, Thuraya IP+, Thuraya HotSleeve, aimed at optimizing business processes and improving the efficiency of modern business. "We have seen strong interest of exhibitors in new solutions. The innovations in telecommunications allow the oil and gas industry to save money and time,which is critical during the crisis. Therefore, we had a success at KIOGE,"comments the market realities Nabil Ben Soussia, the Regional Director of IEC Telecom in Kazakhstan.

The exposition was extended beyond the pavilions-many modifications of cars, containers, solar power generators and engines from Europe, a huge cable laying machine and other equipment were presented there. It is worth noting that KIOGE Exhibition is traditionally placed at the agenda not only  by the leading energy industry specialists, but also by high-ranking officials of relevant government agencies. So, the delegations of top managers from AtyrauNefteMash, Atyrau refinery, Pavlodar petrochemical plant, as well as Larissa Zhumagalieva, Head of Entrepreneurs division and Industrial &Innovative Development of Atyrau Regional Akimat and Amirbek Tulegen, Chairman of the Board of JSC “Special Economic Zone of Aktau Seaport” visited KIOGE-2015 Exhibition.

While visiting KIOGE-2015, the Vice Minister for Investment and Development of the RoK Albert Rau highly evaluated the level of the exhibition and held a series of talks with participants in the exposition, including Executive Vice President of the Korean Association of Mechanical Engineering (KOAMI) Mr. Yang Tak Park regarding the possibility of launching new production facilities in Kazakhstan.

The exhibition was organized by Iteca company and its international partner- ITE Group, which annually offer new technological solutions for the most efficient use of all the features of the exhibition for the participants and visitors. This year the organizational innovation was a new visitor registration system, implying more effective system of data counting and processing that allows to inform them about upcoming events and to reduce the timing of registration.

The promotion, dedicated to rebranding of  Iteca, provider of the oil and gas events (a part of broader initiative, aimed at establishing a single global brand of ITE Group Plc worldwide) was done in the frameworks of KIOGE-2015, with support of Honeywell company.  In 2016 24-th Kazakhstan International Oil&Gas Exhibition and Conference (KIOGE) will take place under a new brand - Global Oil and Gas.

Official site of the Oil&Gas Exhibition and Conference - www.kioge.kz.