About Karachaganak, Каshagan, Gas and Modernization of Oil Refineries 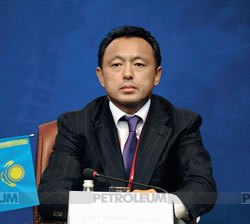 On April 21, the online-conference on the theme «Investment Projects in the Sphere of Oil and Gas» was held on BNews.kz portal (http://www.bnews.kz) with participation of the Minister of Oil and Gas of the RK Sauat Mynbayev. Petroleum journal offers its readers the shorthand report of this conference.

− At what stage are negotiations with the shareholders of the consortium developing the Karachaganak field? When the agreement with this project participants will be achieved, in your opinion?

− As such, there are no stages of negotiations. However, each of the sides is aware what we wish, and it’s likely that we will not turn to arbitration, we will make arrangements. I can’t make comments in detail because negotiations are held right now. The main meetings are planned for May 10.

− When a “deciding” meeting will be held if to speak about the terms? How often are held such negotiations?

S.Mynbayev: To date, they have been intensified, the last time we met was two weeks ago. I hope that in the first half-year we will reach certain arrangements. Not much time is left. Unfortunately, I can’t make comments any more, because the terms and results of arrangements depend not only on the Kazakhstan side.

− If a compromise will not be found, will the Ministry of Oil and Gas be ready to cancel the contract unilaterally?

− I do not think that the question stands so sharply. If we were not ready, in due time we would not submit counter-claims. But then, during negotiations, both sides decided that it would be more correctly to suspend the statements of claim of both sides and to try to settle the issue by means of negotiations, not resorting to arbitration. Both sides are consistently adhering to this strategy, so I think that finally we shall make arrangements.

− What is the share of the republic’s profit in this project?

− In general, under the contract, the scheme is such. For example, 100 % of proceeds, of them 60 % are the so-called cost oil which goes to cover expenses; 40 % are considered as profitable crude. After taxes, this business is divided as profitable oil in different proportion depending on the stage of the project. From 20 % to 80 % can go to the republic’s benefit, accordingly, from 80 % to 20 % – to the benefit of the consortium. It depends on the so-called «built-in triggers». These are certain threshold values of certain indices. Currently, Kazakhstan receives 20 % from the profit of oil after taxes. Taxes take a rather significant share.

− What volume of capital expenses for the third phase of Karachaganak’s expansion suits Kazakhstan?

− By what time this issue can be solved?

− Earlier Timur Kulibayev and Каirdeldy Каbyldin said that Kazakhstan aspires to get a 10 % interest in the Karachaganak project. How do you see the scheme of such deal?

− What variants are reviewed today in general?

− Absolutely, no comments. Because without any legal and regulatory framework, whether we wish to have a share or not, it is a premature talk. No official arrangements on the share exist to date.

− Nevertheless, whether the government, in case of share holding, is ready to pay for this share by cash?

− If suddenly the government will get a chance to acquire any share, and if suddenly the consortium will agree to sell any share, the variant of payment, as you have said, by cash, certainly exists and is possible.