«KMG EP intends to be the Kazakhstan’s second company on the volume of oil production.» About it has stated Askar Balzhanov, SEO of JSC KazMunaiGas Exploration & Production (KMG EP) at the next conference «RD OPEN» which was held on May 17 in Astana.

Already today KMG EP, given the shares in joint ventures, produces 270 000 barrels of oil a day and thus is the republic’s second largest company after Tengizchevroil. At the same time, in 2010, the board of directors of KMG EP has approved three deals on acquisition of large share holdings in the companies Mangistaumunaigas, Kazakhoil Aktobe and Kazakhturkmunai. According to Аskar Balzhanov, KMG EP hopes that these deals will be approved in the near future by the appropriate governmental bodies after which the company’s consolidated volume of production will reach 339 000 barrels a day by strengthening its positions in the country’s three leaders. 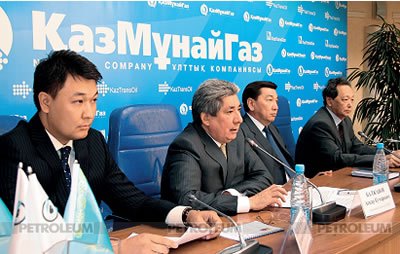 Along with it, in recent times KMG EP is making considerable investments in geological exploration. Due to this, the recovery ratio of reserves at the Uzen and Emba fields raised up to 73 % in the past year. This is essentially higher than in the previous years. However, as stated at RD OPEN Bazar Yeskozha, the company’s chief geologist, this does not exhaust all existing possibilities. Therefore, in 2011 capital investments in KMG EP will be increased by more than 20 % (up to $709 million) and directed primarily at additional exploration of available assets.