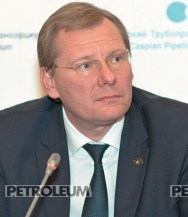 Was born on June 23, 1970 in Lukhovitsy, Moscow oblast. Graduated from Donbass State Academy of Construction and Architecture in "Industrial and Civil Engineering" in 1997, Tyumen State Oil and Gas University in "Designing, Construction and Operation of Gas and Oil Pipelines and Gas and Oil Storages" in 2001. Holds PhD in Technical Sciences. Held positions of Operations Deputy Director of JSC «Chernomortransneft», Chief Engineer of JSC «Mostransnefteproduct». First Vice President of JSC «Transnefteproduct» (subsidiary of JSC «Transneft») from April, 2012 to March, 2014. Appointed as President of JSC «Transnefteproduct» on March 7, 2014. On June 25, 2016 Nikolay Gorban started performance of obligations as CPC CEO. He was proposed by JSC «Transneft» representing interests of the Russian government shareholder and approved by all shareholders.

Meeting of Nikolay Gorban – CEO Caspian Pipeline Consortium and Sauat Mynbayev - the Chairman of the Board of the National Company «KazMunaiGas» took place in Astana in the middle of September. Nikolay Gorban noted that CPC is ready to provide increase in through capacity of «Tengiz - Novorossiysk» oil pipeline fully and timely for oil acceptance from Kashagan field. CPC pipeline system – one of the largest investment projects in the energy sphere with participation of foreign capital in the territory of CIS. Length of the pipeline connecting West Kazakhstan oil fields and sea terminal in Novorossiysk makes 1 511 km. CPC sea terminal is equipped with portable mooring facilities allowing safe unloading of tankers at a considerable distance from the beach as well as under adverse meteoconditions.

CPC Expansion Project assumes upgrade of 5 existing and construction of 10 additional oil pumping stations (2 – in the area of the Republic of Kazakhstan, 8 – in Russian Federation), construction of six tanks (capacity 100 thousand CBM each) in addition to four existing oil storage tanks near Novorossiysk and third portable mooring facility at CPC sea terminal, and replacement of 88-kilometer section of the pipeline in the territory of Kazakhstan with the pipe of bigger diameter. Total project investment will make 5,4 billion US dollars.

Nikolay Gorban headed Caspian Pipeline Consortium rather recently, in June this year, he was proposed by «Transneft» and accepted by CPC shareholders. In an interview to Interfax he told about the facing tasks in a new position, about CPC plans for oil pumping for 2016 and 2017 and aspects of Consortium work after upgrade.

– You took up a post of CPC Head recently. What are the main objectives you face?

Secondly, we consistently integrate the new objects into the operating CPC pipeline system. And the third – we continue systematic work on improvement of CPC main activity.

– What effect is expected after completion of Expansion Project? How do you assess the progress of work and will it be finished in time?

– As you know, CPC is one of the most profitable and reliable oil transportation routes of the Caspian region to the world markets through Novorossiysk port. Opportunity of oil transportation in an increased volumes generally from Kazakhstan fields, these are Kashagan, Karachaganak and Tengiz fields, and from Russian field after Filanovsky developed by «Lukoil» will become the result of Expansion Project. We already received requests for an increase in volumes of oil running from operators on all three fields in Kazakhstan. In principle, we create that surplus of capacity which is needed for increase in oil extraction on these fields.

At the moment the total CPC throughput grew to 52 million tons of oil a year. It became possible due to commissioning of the new objects constructed within the first phase of Expansion Project. These are 19 objects - 16 in the territory of Russia and three in the territory of Kazakhstan. Oil pumping station OPS-4 was constructed in Stavropol Territory and OPS-3 in Kalmykia; oil pumping stations were started and upgraded in the territory of Kazakhstan: Tengiz and Atyrau. Tank battery in Novorossiysk expanded to 700 thousand tons. We expect commissioning of three more tanks, capacity 100 thousand tons each, until the end of the year. Thus, the volume of the tank battery will reach 1 million tons.

– What objects do you plan to commission in the nearest future and when CPC plans to reach design capacity?

– We plan to reach design capacity in the second half of 2017. Total completion of complex testing and achievement of readiness of oil pumping stations A-OPS-4A and A-OPS-5A (Astrakhan Oblast), OPS-2 (Republic of Kalmykia), OPS-5 (Stavropol Territory), OPS-8 (Krasnodar Territory) for commissioning is planned in Russia by the beginning of 2017. Construction of two stations is almost complete in Kazakhstan: A-OPS-4 will be put into operation in November, 2016, and as for A-OPS-3A - its complex testing is planned for December, 2016 that will allow to commission the station in the first half of 2017.

– It was earlier said that CPC Expansion Project is planned to be finished by the end of 2016...

– Yes, we planned project completion by the end of 2016, but for certain objective and subjective reasons it turned out that commissioning of a number of oil pumping stations is postponed to the next year. But it will not affect system capability to accept declared oil volume from producers.

– What are the reasons to postpone the facility commissioning?

– The reasons are various. There are land issues, legislation issues on objects commissioning, equipment supplies. In certain cases it was necessary to change contractor due to the low-quality work and non-compliance with target dates.

– Whether sanctions affected the Expansion Project implementation, are there problems with supplies of import materials?

– I can tell that sanctions of the European Union and USA did not significantly affect Expansion Project implementation. The most part of the equipment was supplied before sanctions imposing, except for some types of the equipment which is the part of complex delivery, for example, pumping aggregates. But contracts are signed, there is no prohibition, therefore, we do not experience difficulties. For the many line items we managed to use products of producers from Russia or neighboring countries instead of import deliveries.

– What is the share of Russian products used within expansion project implementation?

– By value, the share of Russian equipment and products makes 70% in the total scope of purchased equipment for CPC.

– Can you assess today whether all CPC capacities will be used after upgrade completion?

– How many requests for 2017 are received by CPC and what amount of pumping is expected?