A special issue devoted to the ATYRAU OIL & GAS - 2011 Exhibition

Tengizchevroil: 2010 in Review. Safety and Health

Safety and health of our workforce is a core value for TCO. Our commitment to ensuring safe and reliable operations resulted in continued world-class results, in fact, in 2010 we recorded our safest year ever.

An important aspect of safety in an operation such as Tengiz is motor vehicle safety. We also recorded our safest year ever in this area, another world-class result. TCO vehicles had zero serious collisions over the nearly 50 million kilometers driven in 2010 – equal to 60 round trips to the moon or 1,200 trips around the Earth. In 2011, we will continue to the push for even better performance as we move towards an injury and incident free workplace. 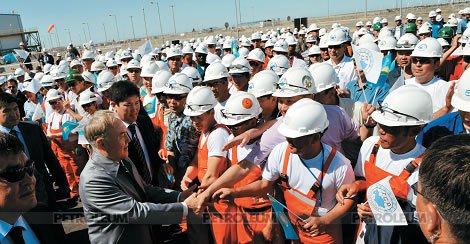 TCO has been working to increase gas supplies and to eliminate routine flaring for more than a decade. This investment has resulted in a reduction of total gas flaring volumes by 94 percent in that timeframe. In December 2009, we completed a four-year, $258 million Gas Utilization Project which eliminated routine flaring and also enabled us to meet of the Republic of Kazakhstan’s Gas Utilization goals and our established deadline.

TCO set another crude oil production record in 2010 at 25.9 million tonnes, an increase of 15 percent above the previous record set in 2009. TCO’s growth in production from 1 million tonnes in 1993 to nearly 26 million tonnes has been accomplished through continuous investment and keen focus on plant and operational reliability. TCO has invested nearly $9 billion dollars in capital investments for production growth including the Sour Gas Injection and Second Generation Plant (SGP) expansion projects. The SGP achieved full design rates in 2010.