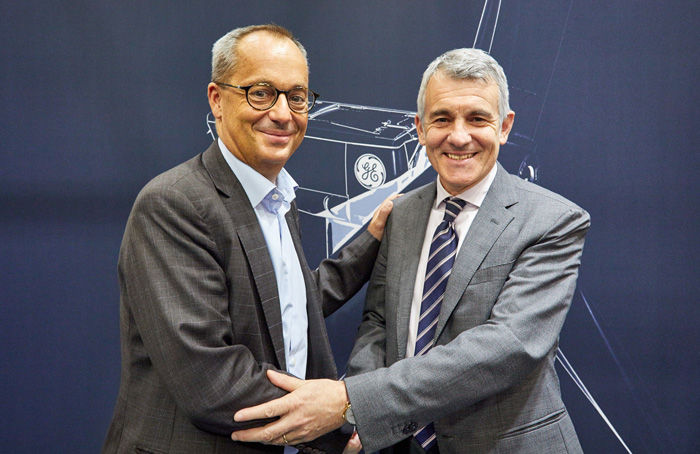 Eni and GE Renewable Energy (NYSE:GE) today announced that GE will supply 13 of GE’s 3.8-130 onshore wind turbines, with a hub height of 85m, 3.8MW of power and a 130meter rotor, for the Badamsha project in Kazakhstan. With its 48MW of wind power the plant will increase the Country’s wind capacity by 25%.
The two companies held a joint-meeting at Wind Europe, one of the biggest and most important meetings of the wind industry worldwide, attended by Jérôme Pécresse, President and CEO of GE Renewable Energy, and Luca Cosentino, Executive Vice President of Energy Solutions department in Eni, to celebrate the milestone for both companies. The Badamsha plant, located in the north-west region in the Aktobe oblast, represents Eni’s first large-scale investment in wind power and GE’s first wind onshore plant in Kazakhstan.
Mr. Pécresse said: “Badamsha marks our first wind project with Eni and our first in Kazakhstan. We are extremely proud to be working alongside Eni during an exciting time for them and for the entire energy segment, where GE Renewable Energy’s role as integrator enables better synergies across our industries.”
“With this project Eni is pleased to fully support the Country’s ambitious goal to procure 50% of its energy from renewable sources by 2050. The Badamsha plant represents a first concrete achievement of the Memorandum of Understanding we signed last year with GE and the Ministry of Energy, Kanat Bozumbayev. We expect to have it in operation by the end of 2019”, Luca Cosentino said. He also underlined that Eni plans to invest 1.2 billion euros over the next four years on its renewable energy portfolio, which includes worldwide solar, wind and hybrid projects.
Eni has been present in Kazakhstan since 1992. Eni is joint operator of the Karachaganak field and is an equity partner in various projects in the Northern Caspian Sea, including the giant Kashagan field. In 2018 Eni became joint operator in the exploration block Isatay, with the national company KMG.
About GE Renewable Energy
GE Renewable Energy is a $10 billion business with a start-up mindset, bringing together one of the broadest energy products and digital services portfolios in the renewable energy industry. Combining onshore and offshore wind, blades, hydro and innovative technologies such as hybrid systems and concentrated solar power, GE Renewable Energy has installed more than 400+ gigawatts capacity globally to make the world work better and cleaner. With more than 22,000 employees present in more than 80 countries, GE Renewable Energy is working on new ways to power the world’s biggest economies and most remote communities.
About Eni
Eni is an energy company operating in 71 countries worldwide and employing around 33,000 people. With the goals of improving access to energy in the countries where Eni operates and making maximum effort to reduce direct emissions of CO2, the company launched the Energy Solutions business unit. To ensure the long-term sustainability Eni Energy Solutions looks for synergies with other lines of business and promotes the development of renewable forms of energy and engage in scientific and technological research.