One of the topical problems of wells safe operation is the flow behind the casing. This phenomenon poses a threat to the wellhead pressure loss, casing integrity damage, blowout, cratering, emergence of formation an anthropogenic deposits.

The problem of flow behind the casing is often found in wells operating practices, for example, more than 8000 wells in the Gulf of Mexico have such problem, about 50% of oil wells at the offshore White Tiger field in Vietnam, almost 30% of wells of gas condensate sulfurous Karachaganak field in Kazakhstan.  In Russia, about 25-30% of all production wells of Gazprom PJSC, and even 50% at the Northern fields, are wells with the flow behind the casing of various volumes. At the gas fields in the North of Tyumen region, after putting wells into commercial development, flow gas behind the casing shows and cratering were detected at the wellhead of more than 50% of the production wells [1].

Causes of the flow behind the casing are mainly [1-3]:

One such technology is successfully applied, including at the AGCF, is the gravitational method based on the application of the special fluid with density of 2.1-2.3 g/cm3. It is a suspension of microbarite with particle size of about 1 μm (fig. 1 and 2) in a liquid solution of surfactants and solvents. By virtue of good penetration this fluid is able to be filtered in the space between casing and surface casing or conductor and further, due to high density of solution, to deter the flow of gas to the surface.

Fig. 1. Size comparison of microbarite with a standard barite

Fig. 2. Diameter comparison of microbarite particles with a standard barite

Technology of the flow behind the casing liquidation using microbarite based fluid provides a series of operations. At the first stage, microbarite based fluid is pumped (fig. 3, b) into space between casing and surface casing with broken cementing, where formation fluid enters (fig. 3, a). At the second stage, the fluid because of its density (2.1-2.3 g/cm3) gravitationally replaces formation fluids in the space between casing and surface casing, in cracks and channels in the cement stone (fig. 3, c) and stops the flow of formation fluids through this space  (fig. 3, d).

Fig. 3. The flow behind the casing elimination technology on the basis of microbarite containing fluid

Another feature of the impact on the space between casing and surface casing is its small injectivity, sometimes it is problem to inject any amounts of fluid in it. To intensify this process special wellhead  power waves generators are used in order to create pulsating pressure in the flow of injected fluid and facilitate its penetration into the space between casing and surface casing, in fractures and channels in the cement stone. It is important not to disturb the existing strength of the cement stone, its contact with the metal of a pipe. Therefore, the parameters of the vibration exposure are specially chosen taking into account this factor. Fig. 4, shows the nomogram for determining allowable pulsating pressure on given excessive static pressure. It is designed for the different b/a parameters (b - outer radius, a - inner radius of casing) that are corresponding to used in oilfield practice set of 148 mm and 168 mm casings. 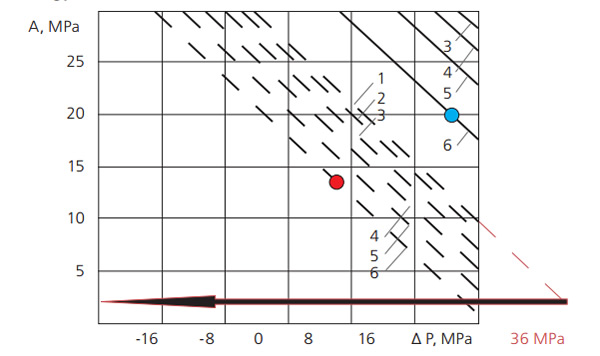 Thus, the flow behind the casing elimination technology of Zirax using suspensions of microbarite is an effective way of extending the safe operation of oil and gas wells.