At the present stage of the oil industry development one of the main tasks is to maintain the current level of oil production. This problem is solved by increasing the volume of drilling, as well as through the intensification of the work of the old production wells at the fields. The last circumstance leads to a significant increase in the number of current and capital repairs of the wells.

The most important role in the process of carrying out repair work is played by well-killing fluids, scientifically based selection of which provides prevention of complications such as absorption, oil and gas blowouts, reduced productivity of wells in post overhaul period and an aggressive corrosive influence on downhole equipment.

Annual demand of industry in technological well-killing fluids, not contain solids, in a wide range of densities amounts to hundreds of thousands of tons. The use of such fluids is limited to a narrow range of applied salts.

A special place among the well-killing fluids belongs to heavy brines, widespread use of which is dictated by the desire to ensure the maximum degree of preservation of reservoir properties of productive layers, characterized by high pressures. 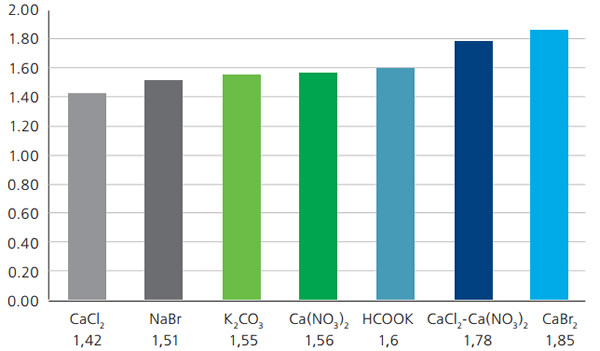 Water-based well-killing fluids are the most technologically advanced, least toxic and environmentally safe. The main components for making 1350-1800 kg/m3 density brines include calcium chloride, bromides of potassium, sodium, calcium, zinc, carbonate and potassium formate, calcium nitrate (Fig. 1). The existing number of specific properties of heavy brines dictates strict rules when working with them. Firstly, heavy brines cost significantly more than light and weighted. Secondly, almost all of them have elevated or high corrosive activity, especially at temperatures above 90°C. Thirdly, many of them crystallize at low temperatures. Due to the high concentration of salts there are difficulties in regulating rheological and filtration indicators of brine that sometimes leads to absorptionor other complications.

Weighing upthe pros and cons of given reagents.For example, calcium chloride brine with 1300 kg/m3 density crystallizes at a temperature of about -50°C, hence its widespread use in the repair of wells, but 1400 kg/m3 density crystallization in brine begins at 13°C. Potassium carbonate based well-killing fluids have highly alkaline reaction and prone to intense sedimentation when contacting with calcium chloride formation waters. Bromides based solutions are expensive and have high corrosive activity. Due to its scarcity potassium formate is only used in very specific cases.

Abroad almost all brines with density above 1400 kg/m3 are represented by solutions with bromine-containing salts. Calcium bromide is the most widely used. It is produced in the form of solution with density of 1700 kg/m3 (crystallization temperature is 13°С) or 95% concentrate. In the range of density of 1400-1810 kg/m3 most often brines on the basis of chloride and calcium bromide are used. Addition of calcium chloride increases the density of the base fluid, reduces its cost.

In order to kill wells with high formation pressures, as well as to reduce the value of well-killing fluid, group of Russian scientists headed by Professor, D.Eng.Sc. Riabokon S.A., has developed synergistic salt composition based on calcium nitrates and chlorides, the operating density of well-killing fluid based on it reached 1800 kg/m3. By virtue of their research technical possibility of using calcium nitrate in the repair and well completion became possible.

There are a number of patents on technological calcium nitrate-based well-killing fluids, where in addition to the listed reagent calcium chloride, zinc chloride in different ratios, corrosion inhibitors, scale inhibitors, oil wetting agents are present.

In the 2013, United Chemical Company URALCHEM JSC, a leading manufacturer of mineral fertilizers in the Russian Federation, started production of anhydrous calcium nitrate of Premium brand, at the Kirovo-Chepetsk Chemical Plant, for the oil and gas industry. The product turned out to be unique for the Russian market, because the content of main substance is more than 96% (98% in fact), turbidness of brine with 1420 kg/m3 density is less than 10 NTU, calcium nitrate-based brine has low corrosivity.

Specification of anhydrous calcium nitrate of Premium brand is presented in Table 1.

It should be noted that the corrosion aggressiveness of calcium nitrate solution with density of 1450 kg/m3 at 20°C, 90°C, 150°C temperatures is classified as low and satisfies the requirements adopted in the oil and gas industry, less than 0.12 mm/year. (Table 2).

In 2014-2017, positive laboratory tests and pilot tests were conducted using calcium nitrate produced by the KCKK Branch of URALCHEM JSC at the objects of Rn-Yuganskneftegaz OOO, Rn-Purneftegaz OOO and Samaraneftegaz JSC, at the Branch of Gazpromneft-Noyabrskneftegaz. Today, United Chemical Company URALCHEM JSC is the official supplier to the above-mentioned companies, where calcium nitrate of Premium brand has been successfully used for preparation of heavy well-killing fluids with density of 1350-1600 kg/m3.