Saule Dzhundubayeva: VHI and CSHI are not Competitors but Partners 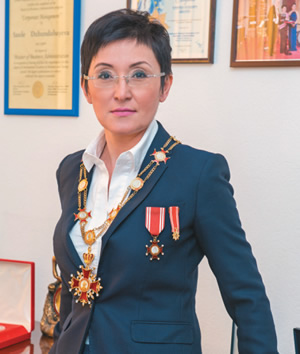 Introduction of Compulsory Social Health Insurance (CSHI) in the Republic of Kazakhstan in 2019 is by far one of the most discussed topics among citizens of Kazakhstan.  But professional insurance community, more specifically, health insurers, are concerned with the question: how already built system of Voluntary Health Insurance (VHI) will coexist with the newly introduced CSHIsystem? Saule Dzhundubayeva, DBA, Chairman of the Board of Directors of Kazakh Corporation of Health and Medical Insurance INTERTEACH JSC expressed her opinion to Petroleum Journal regarding that issue.

- Saule Otanovna, Interteach Corporation has always been at the forefront and the cutting edge on part of health insurance.Many insurers with great skepticism are looking at the current situation of the CSHI introduction and predict quick demise of VHI. What do you think about the current market situation, how such a pessimistic forecast can be implemented?

- Indeed, Interteach Corporation was the first company in Kazakhstan, which introduced health insurance. Moreover, the company was founded in 1989 and in 1995 it had received the first license on the territory of Kazakhstan for the right to carry out insurance activities. Interteach Corporation is the only company in Kazakhstan, providing medical care in any region of Kazakhstan, in Kyrgyzstan, Turkmenistan and Uzbekistan, and has its own network, consisting of 27 clinics.

With regard to the situation on the VHI market and overall picture of healthcare, some figures can be cited. The share of expenses on healthcare in Kazakhstan in 2017 amounted to 2.48% of GDP. Over the past 5 years, this figure ranged from 2.12% to 2.48%, despite the annual increase in expenditure of Kazakhstan’s State budget on healthcare. For comparison, in the group of countries with high/medium-income, the rate is 6.3%, in OECD countries and in the EU on average it is 9.3%. Health care costs in neighboring Russia accounted for 5.9% of GDP.

The VHI share in overall expenditures of the medical sector in Kazakhstan does not exceed 3% (for the last 5 years, ranging from 2.02% to 2.55%), i.e. remains at a relatively low level and lags far behind those of developed countries. For comparison, in the United States and Western Europe this indicator equals 80-85%. VHI in Kazakhstan covers no more than 4% of the population, or 700-720 thousand people.

VMI is carried out on the basis of insurance programs and allows the insured to receive a broader list of timely, quality medical services in a comfortable environment, rapid and unimpeded access to medical services, including private suppliers (Russia, Kazakhstan and others). Meaning that VHI is a complementary program, so the costs to employers and citizens for CSHI, planned to be introduced in 2019, can actually reduce effective demand for VHI programs. So, under certain conditions, pessimistic scenario may become a reality.

- But, citizens who are accustomed to a certain level of health care and spend money on their health, both in terms of VHI and paid services, are not likely to agree to be treated on general conditions for their own money.What to do about that?

- In the Constitution of the Republic of Kazakhstan citizens' rights with regard to healthcare include the right to receive free medical care, as well as paid medical services. Logically, I, as a citizen, who contributes funds into the CSHI system, I have the right to use medical services under CSHI. In many ways the CSHI system not presupposing the existence of comfort and service, to which I am accustomed to, and I am willing to pay extra for this service either through the VHI system, or on the basis of paid services. Today citizen, paying obligatory payments to the Compulsory Medical Insurance Fund and wanting to get quality service, forced to bear a double costs from his or her budget.

It should be noted that the idea of introducing CSHI implies the protection of citizens against significant medical expenses in case of serious illnesses requiring expensive diagnostics and treatment.

But the situation is such that the citizens face a choice: either use "what you are given" or pay additionally for “what they want”, without being able to refuse services in the CSHI system.

The problem can be solved, if the possibility of an effective system of interaction between CSHI and VHI is provided.

- How can the scheme of interaction between CSHI and VHI be implemented?

- The main principle of introducing the CSHI system is mandatory and universal coverage, while VHI should be a complementary insurance to CSHI that will provide participants with equal opportunities in receiving medical and pharmaceutical assistance.

The main condition of successful implementation of the interaction strategy between CSHI and VHI is accurate and clear description of the program of State guarantees, that is, types, amounts and conditions for granting free medical care. The establishment of a system of interaction involves the following key decisions:

- What role will be given to insurers in the CSHI and VHI interaction system?

- Everything that relates to the role of insurance companies under VHI, then it should remain the same, in addition, insurers will implement health system funding by attracting funds of enterprises, employers and the public, the accumulation of these funds and their further distribution among medical institutions. Also, the system of interaction within the CSHI will reduce burden on the public health institutions, will have an impact on improving the quality of services provided, as well as control over the flow of patients and financial flows.

But such interaction, according to insurers, can be arranged with the participation of assistance companies.

Service assistance company provides health care and services, with its own network of clinics, equipment and infrastructure, its own medical staff, technical, technological and information resources, finances, which provide the reliability of such a company as a partner of the insurer. Interteach is the assistance company of the latter category.

Participation of assistance companies in the CSHI system as key players in healthcare is necessary for several reasons. First and foremost is the experience and financial flows management mechanisms in the field of healthcare of the insured and general population, on regulation of mutual settlements, mutual, assessing the quality of services and management of patients flow. Another reason is the presence of worked through liaison protocols with medical organizations, control and monitoring of medical expenses, monitoring the quality of medical services. It is an assistance company who is working to secure health insurance contracts. And only with the participation of assistance companies there is the opportunity to provide the volumes of VHI and CSHI in any region of Kazakhstan.

- As a leading medical insurer, could you formulate a "recipe" for a successful partnership between the State and the private market in part of combining VHI and CSHI?

-Yes, as a company that understands medical business internally, we have prepared a proposal which, in our view, will successfully implement an effective combination of VHI and CSHI. First of all, it is necessary to develop our own model of Kazakhstan’s compulsory health insurance, which will improve the system of social guarantees. It is necessary to take into account, that payment of medical care will be and should be carried out depending on the volume and quality of work done.

Talking about specific steps, following should be conducted in the first place:

It should be noted that such proposals come not only from Interteach. These proposals have repeatedly been discussed by the insurance market, and insurers fully support them.

- Insurance companies have long made proposals for joint participation by the State and private business in the healthcare system, but as far as I know, the Ministry of Health has not yet shown a due consideration to these proposals. Something has changed in this regard?

- On the threshold of the introduction of CSHI, the Ministry of Health started to actively consult with the insurers on the joint implementation of CSHI and VHI. On July 3 of this year, there was a meeting of the Business Council of the Ministry of Health of the Republic of Kazakhstan, under the chairmanship of the Minister of Health, Birtanov E.A.. Within this meeting the development of voluntary health insurance for the purposes of achieving universal access to health services was discussed, taking into account the implementation of the CSHI system.

After the meeting it was decided to further consolidate the comments and proposals of the insurance companies for the development of voluntary health insurance and achieving universal access to health services, taking into account the implementation of the CSHI system. This decision was made for the formation of legislation providing for the most effective possibility of combining CSHI and VHI and taking into account the interests of all participants of the healthcare system.  So there is progress, and we very much hope that all scheduled will be implemented for the benefit of everyone.