The Legal Status of the Caspian Sea is Defined 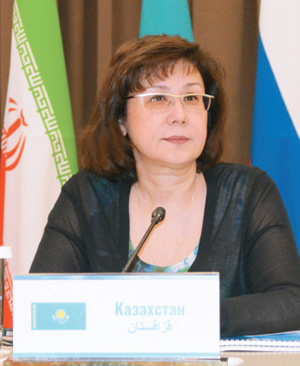 August 12, during the Fifth Caspian Summit in Aktau the heads of Azerbaijan, Iran, Kazakhstan, Russia and Turkmenistan have adopted the Convention on the Legal Status of the Caspian Sea. Zulfia Amanzholova, Foreign Ministry's Ambassador at Large of Kazakhstan, comments on the results of the Summit.

- Could you tell us about the significance of the adopted Convention on the Legal Status of the Caspian Sea?

- In a media statement on the outcomes of the Fifth Caspian Summit, the President of the Republic of Kazakhstan Nursultan Nazarbayev described the Convention as the Constitution of the Caspian Sea. This is a fundamental instrument that the littoral states will be guided by to solidifytheir relations acrossall areas of cooperation.

The Convention regulates a whole range of issues related to the rights and responsibilities of the littoral states regarding the use of the Caspian Sea, including its waters, seabed, subsoil, natural resources and airspace.

It clarified the delimitation of the water area. It established territorial waters 15 nautical miles from shore, meaning the external borders are now treated as state borders. 10-mile fishing zones, where each state has exclusive fishing rights, have been createdadjacent to the territorial waters. Fisheries will be based on agreed national quotas. A common water area is preserved beyond the fishing zones. Ships flying the flags of the littoral countries will have freedom of navigation outside of these maritime state borders.

The presidentsof the littoral statesagreed to set specific tasks for their foreign ministries in order to implement the Convention on the Legal Status of the Caspian Sea. The ministries of foreign affairs are charged with forming a high-level group on Caspian Sea issues. The short-term task of this group is to draft and harmonize an agreement on the methods of setting straight baselines in the Caspian Sea.

The presidentsalso agreed on the need to develop an agreement focused onconfidence-building measures in the Caspian Sea. This agreement should serve the common goal of ensuring peace and stability in the region.

The presidents of the Caspian countries entrusted the negotiating teams of the littoral states with the task of finalizing the agreement aimed at countering the illegal fishing and erosion ofthe naturalresources of the Caspian Sea.

The fact that we have defined our state border along the entire perimeter of our territory is also important for Kazakhstan. Before signing the Convention Kazakhstan had legally defined land borders, now the Convention allows Kazakhstan to define the limits of sovereignty at sea as well.

Our country is landlocked; it has no access to the open seas and oceans.

The international universal conventions such as the 1965 Convention on Transit Trade of Land-locked States and the 1982 UN Convention on the Law of the Sea define the right of landlocked states to freedom of transit to the oceans and seas.

Since not all littoral countries of the Caspian Sea are parties to these conventions, we needed to secure the right of access to oceans.

We managed to reach an agreement that all littoral states will enjoy the freedom of transit to the seas and oceans from the Caspian Sea and back through each other’s territories. The possibility of laying submarine cables and main pipelines on the seabed of the Caspian Sea by agreement with the countries through which the route of such cables and pipelines will run, opens broad prospects for diversifying the ways of delivering hydrocarbons to world markets.