From Karashungul to the Caspian Shelf

In the middle of the nineteenth century, Kazakhstan, which was part of the Silk Road, was visited by thousands of merchants from different countries, Russian military, scientists from Russia and Europe, ethnographers. Already then, after initial studies, many scientists noted that these vast lands in the heart of Asia might be rich in hydrocarbons. In the second half of the century, the first expeditions were sent to the territory of Western Kazakhstan, whose task was to search for oil and gas blowouts.
Chapters of history 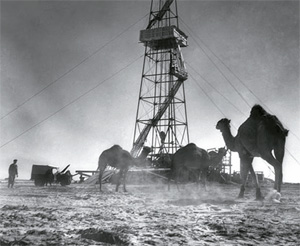 According to historical data, the first geological prospecting and exploration work for oil began at the Iskine field in 1892. In 1893, intensive exploratory drilling took place in the areas of Dossor, Karaton, Makat, and Karashungul.
Lawyer Yuri Lebedev was the first to draw attention to the showings of oil in the Karashungul tract. In 1892, he left a request for exploration in the area. However, he quickly ran out of money, and he sold the right to exploration to a retired officer Lehman, who opened the first oil company in Kazakhstan called Lehman and Co. The records of those years preserved information about 17 wells drilled at the Karashungul structure in 1899. Karashungul oil is described as "very light, transparent and abundant in gases".
There are also reports of 20 wells on the Karaton structure drilled in 1900 and several wells in 1908. Karaton is characterized as a "domed occurrence of oil-bearing strata".
Officially, the history of Kazakhstan's oil originates on the land of Atyrau, with the first gush of oil from the well number 7 of the Karashungul structure in 1899. 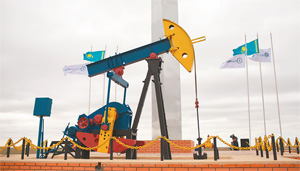 In 1908, at the Iskine field, oilman Stakheev, from a depth of 228 meters, received a gush of light oil with a daily flow of 8 tons.
The oil-bearing areas attracted world attention after a large oil field was discovered in Dossor in April 1911, the quality of which was chemically superior to that produced at that time in Baku.
In a short time, the West Ural oil company, the Central Ural-Caspian company and the North Caspian oil company started oil production in the region, in which, in addition to the British, investors from Germany, France and Switzerland owned part of the shares.
A few years after the discovery of the Dossor oil field, in 1915, the Makat field, discovered by  Nobel company, produces the first oil. This led to the fact that at the turn of 1914-1915, the volume of oil production at these two fields exceeded 200,000 tons.
The revolution and the ensuing civil war slowed the development of the Emba oil fields. Restoration of the destroyed, partially burned oil fields and production were carried out in the conditions of complete devastation, shortage of highly qualified specialists, staff turnover due to shortage of food and freshwater, lack of social conditions and epidemics. 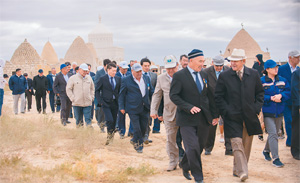 Road to the first well
During these years, the first head of Emba Ruvim Friedman had to solve a whole complex of difficult tasks: to restore the fields, to build infrastructure at production facilities, to provide food for oil workers and their families, to be responsible for the health of the inhabitants of the field and the education of children, to combat absenteeism and to ensure labor discipline.
In those difficult years, along with the development of oil fields, the development of Kazakhstan's national personnel was taking place. If at first, the Kazakhs were exclusively laborers, watchmen, and deliverers of goods, then in the 20-30s of the past century, the implementation of a five-year program of local skilled labor training was launched in the Ural-Emba district. In 1928-1929 from 371 employees the number of Kazakhs amounted to more than 30%, from 2277 workers – about 46%. By the 40s, this figure will exceed 50%.
Their professionalism is also growing. According to the summary table, the number of Stakhanovites-Kazakhs in Kazakhstan Oil Refinery at Dossor, Makat, Isken, Koschagyl, Baichunas ranges from 83% to 97%.
Despite the difficulties of the early years, oil production has steadily increased. In the second half of the 20s of the past century, Emba oil workers were the first in the USSR to use rotary rotary drilling, which contributed to the development of drilling operations. Emba workers in Dossor and Makat were the first at the time to master the ultra-deep drilling, up to 2500-2800 m. 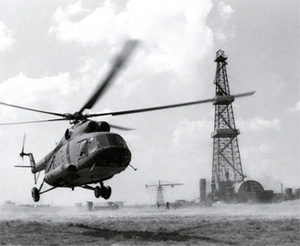 The acceleration of exploration and discovery of a number of fields in the 30s was dictated by the need to create a solid raw material base of the oil and gas industry. At the same time, laboratories were created, an oil technical school was opened, and construction of the Guryev-Emba-Orsk oil pipeline began.
The Second World War became a severe test for the whole country. The selfless work of Emba oilmen, who extracted thousands of tons of oil and supplied fuel to the army, was a significant contribution to the victory over fascism. During the war, Embaneft did not stop its work even for a minute. In these years, Emba produces 39% more oil than in five pre-war years. Despite the difficulties of wartime, the fields Sagiz, Zholdybai, Komsomolskoye, Koshkar were put into development, the oil pipelines Komsomolsk-Makat, Koshkar-Sagiz were laid, a steam turbine power plant was built on Kamiskul.
The high demand for high-quality fuel in the war and postwar years gave a powerful impetus to the development of the region. Guryev oil refinery was built. Kazakhstani oilmen for the first time in the USSR mastered the secondary oil recovery method. The fields of Munaily, Bekbike, and Karaton were put into operation. The turbine method of drilling was mastered.
And since 1945, the Embaneft trust, transformed into the Kazakhstan Production Association, included all the enterprises of the oil industry that operated after the war on the territory of the Kazakh SSR.
To read the full article, please log in
Authorization
or register.