Prime Minister Askar Mamin held talks with a delegation from Total, led by President of Exploration & Production Arnaud Breuillac. During the meeting, a wide range of issues of cooperation in the oil and gas sector was discussed. As a result, documents on the Dunga project in the Mangystau region were signed.

According to the agreement, the terms of the production sharing agreement for the Dunga field will be extended for 15 years: from 2024 to 2039, which will allow production of an additional 9 million tons of oil. The parties also agreed on the implementation of Phase 3 of the Dunga field development, in which the companies will invest about $300 million, which will increase the maximum level of oil production from the current 600 thousand to 850 thousand tons per year.

An important condition of the document is to increase the share of the Republic of Kazakhstan in the section of profitable products under the agreement on a progressive scale from the current 40% to 60% by January 1, 2025.  The agreement stipulates the obligations of the companies to supply part of the produced oil to the domestic market of Kazakhstan and to finance social and infrastructure projects in the amount of at least $1 million annually.

First Vice Minister of Energy Makhambet Dosmukhambetov, KazMunayGas Deputy Chairman of the Management Board for Geology and Exploration Kurmangazy Iskaziyev and Eni Executive Vice President for the Central Asian Region Luca Vignati signed the Protocol of direct negotiations to grant the subsoil use right for the exploration and production of hydrocarbons within joint operations in the Abai field.

Murat Zhurebekov was appointed to the position of Vice-Minister of Energy of the Republic of Kazakhstan by the government resolution. Murat Zhurebekov was born in 1978 in Aktobe region. He graduated from Aktobe StateUniversity named after K. Zhubanov, Kazakhstan Institute of Management, Economics and Strategic Research (MBA), University of Strathclyde (Master of Economics), Harvard Business School (Business Executive Program).

In different years he worked in KazTransGas JSC, Intergas Central Asia JSC, Agip KKO in London, NC KazMunayGas JSC, PSA LLP. In 2017-2019 he was the General Director of PSA LLP (authorized body of the Government of Kazakhstan in oil and gas projects under PSA).

Kazakhstan isubsoil users expect compensation from the Russian Transneft for 700 thousand tons of oil contaminated with organochlorine in the Druzhba pipeline. This is reported by Reuters with reference to the Vice-Minister of Energy of Kazakhstan Asset Magauov.

According to Magauov, the parties are still discussing the compensation scheme and working out the least risky option for the parties to the agreement. The Vice-Minister did not comment on the amount of compensation, suggesting that it is better to wait for the final proposal of the Russian company and the consent of all parties.

Earlier, the press-service of the Kazakhstani oil pipeline operator KazTransOil reported that an agreement was reached with the Russian monopolist on the issue of reimbursement for substandard oil. Details of the agreement were not disclosed. However, the Russian media reported that Russia can pay Kazakhstan compensation for contaminated oil in the amount of $15 per barrel (the total amount would be about $76 million).

Oil exported from the Baltic port of Ust-Luga, which also receives transit raw materials from Kazakhstan, in late April and early May was contaminated with organic chlorine. Buyers refused to accept these shipments or demanded additional discounts on shipments.

KazTransGas JSC announced its offer to each holder of guaranteed bonds in the amount of $750 million with an interest rate of 4,375% with maturity in 2027 to approve and give their consent to the sale of up to 100% of the shares or assets of its subsidiary KazTransGas Aimak JSC and its subsidiary  KazTransGas Onimderi LLP to a third party that is not NC KazMunayGas or its subsidiary, and making certain related changes and additions to the trust agreement of September 26, 2017, concluded between the Issuer,  Intergas Central Asia JSC and the London branch of Citibank N. A., reported in the KTG statement published on the website of the Kazakhstan Stock Exchange.

KazTransGas Aimak JSC was established in 2002. Sole shareholder is KazTransGas JSC. The company's activities are focused on the transportation of gas through distribution networks, ensuring trouble-free and uninterrupted gas supply to the population, municipal, industrial enterprises and infrastructure management. KazTransGas Onimderi is a subsidiary of KTG, it is engaged in the implementation of projects in the field of supply of vehicles with gas fuel.

Chairman of the Board of the National Welfare Fund Samruk-Kazyna Akhmetzhan Yessimov met with President of Tatarstan Ruslan Minnikhanov. During the meeting, the parties discussed the prospects of cooperation in the petrochemical industry. The parties signed a Memorandum of Understanding between KazMunayGas and Tatneft. The parties agreed to cooperate in the implementation of construction projects and modernization of oil refining, petrochemistry and gas chemistry in Kazakhstan, as well as the introduction of new equipment and technologies of oil production, digital technologies.

July 26, KazMunayGas, the Ministry of Energy of the Republic of Kazakhstan and Eni S.p.A. signed a contract for the exploration and production of hydrocarbons at the Abai field.

In accordance with the signed contract, the main minimum obligations are drilling of one exploration well and 3D seismic exploration at the Abai offshore field in the Kazakhstan sector of the Caspian sea.

July 30, KazMunayGas, the Ministry of Energy of Kazakhstan and Total E&P Kazakhstan signed a Memorandum of understanding on digitalization in the oil and gas industry. The Memorandum was signed during the visit of the Minister of Economy and Finance of France Bruno Le Maire to the Republic of Kazakhstan.

In accordance with the signed document, the parties intend to assist state bodies and other organizations in the implementation of the state program "Digital Kazakhstan" and in the further process of digitizationof the oil and gas industry. Within the framework of cooperation, consultations on digitalization, implementation of digitizationinitiatives on the example of Total, improvement of data management, support in training and advanced training of personnel, promotion of educational initiatives are planned. 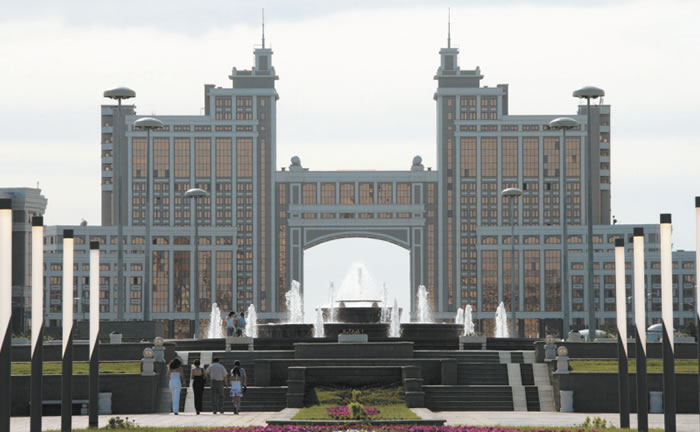