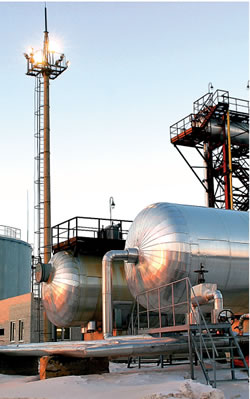 October 9, near the city of Nur-Sultan, a solemn ceremony of welding the so-called Golden weldof the Saryarka gas pipeline took place, which officially completed the construction of the infrastructure of the pipeline. The total length of the gas pipeline is 1061.3 km, covering 171 settlements. The cost of the project is 267.3 bln KZT.  The Samruk-Kazyna Fund took an active part in financing the large-scale project, and the construction contractor is NGSK KazStroyService JSC, the operator is Astana Gas KMG.

Construction of the infrastructure of the project was started in March this year. Thus, the builders took only 8 months to construct agas pipeline along the route Kyzylorda - Zhezkazgan - Karaganda - Temirtau - Nur-Sultan.

After commissioning, the pipeline will be leased to Intergas Central Asia JSC (ICA), which will carry out gas transportation.

The workshop for the production of mobile drilling rigs is planned to be opened at the Kazakhstan plant of oil equipment in Aktobe. This was reported to Interfax-Kazakhstan in the regional Department of industrial and innovative development. This workshop will be the fourth at the plant, the first three produce pump-compressor and casing strings.

In the implementation of the project, the Chinese Shengyuan Technology Co., Ltd invests 5 bln KZT. The capacity of the new workshop will allow to produce up to 24 units per year. The products are planned to be sold on the local market. The management said that the commissioning of the workshop is scheduled for 2020-2021.

KazMunayGas and LUKOIL plansto sign an agreement on the financingof the I-P-2 project. This was reported by the press-service of the Ministry of Energy of Kazakhstan. The project was named after the block in the Kazakhstani waters of the Caspian sea.

In June, the companies signed a principles agreement for the project, in which KMG and LUKOIL agreed on the main terms of cooperation. After signing the financing agreement, KMG will send an application to the Ministry to participate in direct negotiations on obtaining a subsoil use contract.

The I-P-2 license block is located in the Kazakhstani sector of the Caspian Sea. The water depth within the block is from 300 to 400 meters, the distance to the shore is 130 kilometers. A number of 2D seismic surveys covering the block area were acquired in previous years.