New GPP will be built in Kashagan

A modern gas processing plant will be built near the giant Kashagan offshore field. 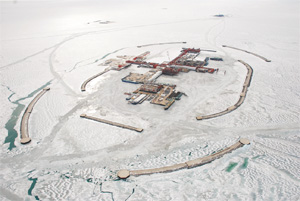 This information was first made public by Vice Energy Minister Murat Zhurebekov at the end of September last year in an interview with Reuters. Then he said that the government had abandoned the idea of GPP construction at Karachaganak field, which was part of the so-called Agreement on principles concluded in the framework of the dispute of the Republic of Kazakhstan with the shareholders of the Karachaganak Petroleum Operating international consortium on the distribution of revenues from extraction of oil and gas condensate. "Karachaganak is already a mature field, and there it is necessary to compensate for the extraction of liquid hydrocarbons by re-injecting gas to maintain reservoir pressure. If we do not support injection into the reservoir, we will not be able to increase production," – Zhurebekov explained.
In Kashagan, the situation is diametrically opposite. Speaking at a briefing in the Central Communications Service in early October, Makhambet Dosmukhambetov, then First Vice Minister of Energy, said that Kashagan is currently being developed as part of Phase 1 of pilot development, with daily production of 380,000 barrels of oil. As part of Phase 1, it is planned to gradually increase production to 420,000 barrels. "Even in the first phase, utilization of the volumes of produced associated gas is a limiting factor for increasing oil production. The Bolashak plant has its own nameplate capacity, which it can not technically exceed. Thus we are considering the option to build a gas processing plant, for approximately 1 billion cubic meters of capacity per year in a modular design so that it can be increased later – First Vice Minister of Energy said. – This issue is being considered technically, and the cost of the project and financing issues will depend on it. The issue is still being worked out, but in principle, this is the right decision to remove restrictions on gas utilization, processing, and oil production. This will also produce additional volumes of gas in the country."
And in February, the press-service of the Ministry of Energy announced the main parameters of the project. The start of the GPP construction is planned for 2020, the total construction period will take 2.5 years. The estimated cost of the project is $1 billion.
The project will be financed by the investor's funds and by attracting funds from financial institutions. The proposed construction site is 12.6 kilometers area North-East of the existing Bolashak oil and gas processing plant in the Makat district of the Atyrau region. Currently, Bolashak is conducting the primary processing of hydrocarbons from the Kashagan offshore field. Geographically, the new GPP will be located 25 km East of the Karabatan railway junction and 60 km from the city of Atyrau.
The designers guarantee the highest standards of environmental safety of the new gas processing plant. Production waste is planned to be transferred to specialized organizations that have the appropriate licenses for the right to handle waste, for its removal, sterilization, treatment, and disposal.
To read the full article, please log in
Authorization
or register.