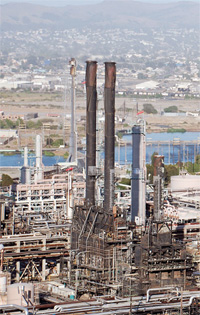 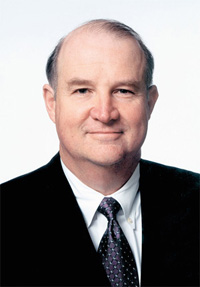 George L. Kirkland is executive vice president of upstream and gas for Chevron Corporation. He is responsible for managing Chevron Corporation's global exploration, production and gas activities. He assumed this position in January 2005 and is headquartered in San Ramon, California.
A native of Florida, Kirkland graduated from the University of Florida with a bachelor's and a master's degree in civil engineering in 1972 and 1974, respectively. Upon graduation, he joined Chevron as a construction engineer in New Orleans, Louisiana. In 1978, he accepted an assignment with Caltex Pacific Indonesia, a Chevron affiliate based in Sumatra. From 1980 to 1985, he served as project engineering manager for the giant Duri Steam Flood project in Indonesia.
In 1985, Kirkland returned to the United States as a senior project manager for Chevron U.S.A. Production Co. Over the next three years, he held positions of increasing responsibility in Chevron operations in Midland, Texas, and Denver, Colorado. In 1988, he worked on the Chevron U.S.A. Production Co. headquarters' staff in San Francisco.
In 1990, Kirkland was appointed group manager of upstream technology for Chevron Research and Technology Co., for which he managed efforts aimed at providing technical support, technology development, project support and consultation to Chevron's worldwide exploration and production activities.
In 1992, he was named general manager of production for Chevron Nigeria Ltd. and was named general manager of asset management in January 1996.
In November 1996, Kirkland was appointed chairman and managing director of Chevron Nigeria Ltd. and was responsible for all its operations, including such diverse projects as the West African Gas Pipeline Project, a major gas-to-liquids project with SASOL of South Africa; the Escravos Gas Project expansions; and deepwater exploration offshore Nigeria. While in Nigeria, Kirkland took a very active role in industry, economic and environmental organizations.
In January 2000, Kirkland was named president of Chevron U.S.A. Production Co., responsible for exploration and production operations in the United States and Canada. In October 2001, he assumed the position of president of Chevron Exploration and Production Co. In January 2002, he was named president of Chevron Overseas Petroleum, responsible for managing Chevron's exploration and production activities outside North America.
Kirkland is a member of the Board of Trustees of Africa America Institute, a board member of Corporate Council on Africa, a director of the U.S.-Kazakhstan Business Association, a director of the US-ASEAN Business Council, and also a board member of the American Petroleum Institute.
Mr. Kirkland was born in August 1950.
San Ramon, California, USA
Petroleum # 2 (56), 2009