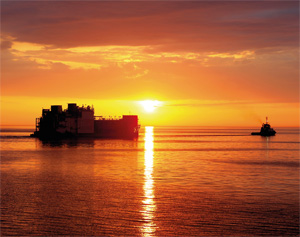 July 1, as part of a Package deal between the shareholders, the integration of the staff of the Karazhanbas group of companies was officially completed. Since that day, Tulpar Munai Service LLP, Argymak Trans Service LLP, Technological Transport and Well Maintenance Management LLP have been merged into Karazhanbasmunai JSC, the company's press service reported.
All employees retained their jobs, the level of remuneration, the duration of employment contracts, vacation schedules. The Board of Directors of Karazhanbasmunai has approved a new organizational structure. Additionally, two new divisions were formed: the Department of Technological Transport and the Department of Drilling, Underground Well Overhaul.
July 2, an incident occurred at the Petromidia refinery near the city of Constanta in Romania, at a diesel fuel processing unit, which led to a fire.
According to Iskander Abdibaitov, KMG International Corporate Development Director, based on provisional information, five people were injured, and one died due to the incident. The company mobilized the necessary resources, technological processes at the plant were stopped, all personnel were evacuated. "At the moment, the fire at the refinery has been eliminated. The fire services of the plant and local authorities are working at the scene of the incident. The situation is under control," Abdibaitov said.
The Petromidia refinery is located on the Black Sea coast and is an oil refinery of KMG International in Romania.
The Ministry of Energy reported that the scheduled preventive maintenance at the Pavlodar Petrochemical Plant, which was supposed to begin on July 24 this year, will be postponed to September.
This decision was made to accumulate the necessary volumes of petroleum products to meet the needs of agricultural producers during autumn fieldwork and avoid a shortage of fuel.
Caspian Drilling Company Limited has completed Satti Jack-Up Drilling Rig modification at Baku's offshore supply and logistics base.
JUR modification made it possible to increase its load capacity from 453 to 680 tons and, therefore, improve its competitiveness. The rig is currently capable of efficient drilling of oil and gas wells deeper than 6,000 meters.
The Satti drilling rig is the first drilling rig built entirely in Kazakhstan following international standards. Earlier, KMG and SOCAR signed a memorandum of understanding and an agreement on joint activities, which provides for the joint operation of a drilling barge at the Absheron structure in the Azerbaijani sector of the Caspian Sea. The owner of the barge is a subsidiary of KMG – KMG Drilling & Services LLP.
The Management Board of NC KazMunayGas JSC has appointed Arman Kairdenov as the General Director of Atyrau Refinery LLP. Shukhrat Danbai, former Refinery director, was relieved of his post.
Arman Kairdenov was born in 1971 in Atyrau. He graduated from the Kazakh Chemical Technology Institute as a Chemical Process Engineer Technologist. In 2003, he graduated from the Academy of National Economy under the Government of the Russian Federation, majoring in the oil business. His career began in 1993 at Atyrau Refinery as a Process Unit Operator. He worked at the refinery for 13 years, taking various positions. Over the years, he held positions of Deputy Director of Oil Refining Department of NC KazMunayGas JSC, Deputy General Director, General Director of Rompetrol Rafinare S.A.
He was the General Director of Atyrau Refinery LLP in 2012-2013. From July 2020, he has been the Director of Oil Refining and Petrochemical Department of NC KazMunayGas.
To read the full article, please log in
Authorization
or register.