He was called Kashagan Boy 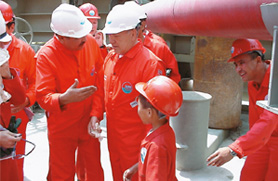 Then Nursultan Nazarbayev asked how I was doing and what I was doing. When I told him that I was studying oil and gas engineering in the UK, he was delighted and introduced me to Mr. Cameron. Then it was a good coincidence that Elbasy, having introduced me to Mr. Cameron, said that I was studying in his country and planned to return to Kazakhstan and work at this field.
The third meeting with Elbasy was already at an official event dedicated to the start of commercial production at Kashagan. It was in 2016. At the beginning of that year, I was already hired by NCOC. Then Elbasy once again recalled the event at Sunkar and gave me parting words already as to an Engineer who works at Kashagan. I was proud to inform the President that I started my career in Kashagan and still work here.
– How did you get a job at NCOC? How did your career develop there?
– I got into the NCOC by general selection. After studying, I submitted my resume to many oil companies in Atyrau, including NCOC.  In 2016, several vacancies opened up in the company, and I was invited to an interview for the position of Technical Data Engineer in the Technical Data Management Department. After successfully passing the interview, I was invited to this position, where I worked for two years on implementing systems and software necessary for the management of wells and reservoirs at Kashagan.
After that, I transferred to the Field Development Department, where I still work. Now the scope of my activity includes work on monitoring wells and the Kashagan formation through various engineering analyses and tests. I can confidently say that my career at NCOC is progressing very well, and I am thrilled with what I am doing and the opportunities that NCOC gives me for my development.
– Kashagan played, without exaggeration, a decisive role in your fate. You have even secured the title of Kashagan boy. Now, after years, how would you characterize the role of Kashagan in your destiny and the fate of the country?
- Indeed, Kashagan played a vital role in my fate. Thanks to this oilfield and the events in my life, I have chosen my life path. And working in the Kashagan operator company gives me great opportunities to grow as a technical specialist and person.
Kashagan also plays a high role in the country's fate, as this field currently accounts for about 20 percent of the country's production and has excellent growth potential. As one of the former NCOC leaders, Mr. Richard Howe, said, Kashagan is a unique field where our children and our children's children can work in the future. I think Kashagan will be one of the primary sources of income for the state and allow the development of other essential industries in our country.
– How do you see your future? Maybe over time, you will switch to another project? Will you go abroad to gain experience? Or do you want to work as a manager, for example, in the ministry or a national company?
– At the moment, everything suits me in the North Caspian Project. I'm very interested in what I'm doing here. Since we started production relatively recently, this allows us to face and solve engineering problems that occur in the early stages of production. This is an excellent school for me to develop myself as an engineer.
As I have already noted, Kashagan is a unique field, and the solutions applied here are international-level solutions. All the tools that we use here comply with international standards of the oil and gas industry. Because of these advantages, I think I'm in the right place at the right time right now.
And yet, a piece of Kashagan's history will always be with me, and I think it will be difficult, if necessary, to leave this project. And about the last question, as they say: "A soldier who doesn't want to be a general is a bad soldier." The dream is always to be responsible for the development of Kashagan and the country's oil and gas industry in the future. Well, we all know the formula too, that for this we need to develop ourselves both from the technical side and a personal point of view. I think this is the only way I will be ready for the challenges that await me in the future.
– What would you wish your compatriots on the eve of the 30th anniversary of Independence of the Republic of Kazakhstan?
- Taking this opportunity, I congratulate the whole of Kazakhstan on the 30th anniversary of the Independence of our country. I wish our country to continue developing. I wish peace and unity of people to flourish in our country for the sake of a bright future in Kazakhstan. I wish happiness, mutual understanding, and well-being in the family of every citizen of Kazakhstan!
October 2021