KIOGE: at the origins of Kazakhstan's oil and gas industry 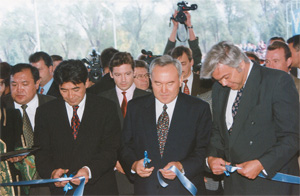 For 28 years of its existence, the Kazakhstan International Oil and Gas Exhibition (KIOGE) has become a real business card of Kazakhstan's oil and gas industry, a kind of entry point for international investors into the oil and gas market of the country. From the very first years, the exhibition was held with official support at the highest level.
KIOGE helped to open the Kazakhstan market to foreign companies working in exploration, production, transportation, and hydrocarbons. Today, the exhibition provides an opportunity for scientists, specialists of the fuel and energy complex, and businessmen of the CIS countries, Europe, Asia, and America to maintain direct contact and work together.
Indicator of market interest
The initiator of the exhibition was the international exhibition company ITE Group. In 1993, Edward Stroon headed the Central Asia and Caucasus division of the ITE Group. At that time, an agreement was being finalized. As a result, the Tengizchevroil joint venture appeared. This company will later become the developer of one of the country's largest oil and gas fields. It was then that the international oil and gas community began to realize the enormous potential of Kazakhstan's resources, Stroon notes.
"If we had to choose one defining moment that set the mechanisms in motion, it would be the publication by the British Financial Times in 1992 of a thematic article about the upcoming Kazakhstani oil boom–" he told reporters in an interview timed to coincide with the tenth anniversary of the exhibition in 2002. – ITE, already under pressure from its clients to start working in Central Asia, sent leading managers to coordinate with the Ministry of Energy and with VDNKh (as the KCBC Atakentwas then called – Ed.) the dates of the first exhibition."
According to Stroon, although KIOGE is not the largest exhibition in the region, it is unique in its role as a clear leader in the market with a balance between local and foreign participation, public and private business, mining and processing, offshore and onshore sectors.
How was the first exhibition held
The organizers faced huge difficulties in organizing the first KIOGE in 1993. There wasn't enough electricity. The dimensions of the VDNKh pavilions did not meet the needs of the exhibition, and at the very last moment, it was necessary to install a tent. The stands had to be imported from Moscow, and they did not arrive on time.
"There were not enough hotel rooms in Almaty at that time, and inexperienced local travel agents reserved rooms for two people per place. As a result, major international figures in the oil industry had to share rooms or sleep in the lobby," recalls Stroon.
Over the next ten years, the situation changed a lot. Since ITE Group was permitted to organize several exhibitions, not just an oil and gas exhibition, the company decided to invest in the infrastructure necessary for international exhibitions. Together with Atakent, ITE Group improved and developed the facilities at the exhibition center in Almaty.
But the most significant changes have occurred in the field of service culture. ITE Group found Kazakhstani partner – Iteca company. Since 1994, ITE has selected the best graduates of Kazakhstani universities and taught them management techniques of exhibitions and conferences. Ten years later, the company had a base of excellent local specialists with first-class knowledge and understanding of what customers want from a reputable international exhibition.
The exhibition is happening
The calculations turned out to be correct – the signing of a long-term agreement between the government of Kazakhstan and the American Chevron on establishing a joint venture to develop the Tengiz field marked the beginning of rapid growth of the local oil and gas market. The agreement with Chevron demonstrated foreign investors' faith in sovereign Kazakhstan's economic opportunities, and the emergence of new major players was not long in coming. At the same time, the Government began to make active efforts to develop the Kazakhstani sector of the Caspian shelf.
In December 1993, the International Caspian Consortium was formed to conduct a three-dimensional seismic survey in the Kazakhstani sector of the Caspian shelf. It includes seven major foreign oil companies: Agip, British Petroleum, Statoil, British Gas, Mobil, Total, Shell, and Kazakhstani Kazakhstankaspiyshelf, which acted as the operator of the consortium.
Soon, the ground was prepared in Kazakhstan for the appearance of another superfield – in 1995, an agreement on the principles of production sharing was signed between the government and Agip, British Gas, Gazprom, and Kazakhgas – companies developing the Karachaganag field. That year, President of Kazakhstan Nursultan Nazarbayev spoke at KIOGE. He invited foreign companies to work in the local market and promised to solve the problem of oil and gas transportation shortly.
The implementation of these plans was not long in coming – in 1997, the national pipeline operator Kaztransoil was established, and in 1999 the practical implementation of the Caspian Pipeline Consortium (CPC) project began. In 2000, with the discovery of the largest Kashagan field in the Caspian Sea with reserves of more than 10 billion tons of oil, the issue of hydrocarbons transportation became even more urgent.
For KIOGE, the beginning of the new millennium was also a turning point. In 2000, the exhibition was attended by government delegations from Great Britain, Russia, Turkey, China, France, and the USA for the first time. In the same year, a section of Kazakhstani companies producing oil and gas equipment and services appeared at the exhibition for the first time. The number of local participants grew quite quickly – in 2002, more than 80 of the 300 exhibitors were Kazakhstani companies.
Oil flow
The 2000s were a period of active development of the largest fields and increasing export capacities. Kazakhstan and Russia have signed a protocol to the agreement on the delimitation of the Northern Caspian Sea. The agreements consolidated national jurisdiction over the disputed hydrocarbon structures of Kurmangazy, Tsentralnaya, and Khvalynskaya, thereby definitively delimiting the subsoil use zones on the shelf of the Northern Caspian Sea. 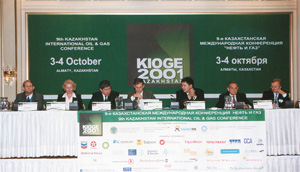 In connection with the intensification of work in the Caspian Sea, the national company KazMunayGas was established. It became the legal successor of Kazakhoil and Oil and Gas Transport. This company and its subsidiaries began to represent Kazakhstan in international consortia with foreign oil and gas companies.
The oil boom in Kazakhstan coincided with an explosive rise in oil prices. The demand for local specialists has been growing every year, and since 2006, a job fair for oil and gas specialists has been held at KIOGE. The largest oil companies operating in Kazakhstan began to hire Kazakhstani specialists, another sign of confidence in the local market.
In 2010, the main phase of creating export capacities for Kazakhstani hydrocarbons was completed. At that time, the oil pipelines of the Caspian Pipeline Consortium (CPC), Kenkiyak - Atyrau, Atasu- Alashankou, Kenkiyak-Kumkol were already built and put into operation, the capacities of Atyrau - Samara, Aktau port were expanded, long-term intergovernmental agreements in the field of transportation and transit of hydrocarbons with border countries were signed.
The era of specialization
Over time, KIOGE began to exhibit world-famous oil companies and smaller firms from Romania, Poland, the Czech Republic, and Croatia. They provided highly specialized services for the manufacture of pipes, drilling, geodetic works.
The design and construction of marine terminals, underwater pipelines, and offshore mooring have become relevant. The already built oil transportation systems also required attention – solutions appeared on the market to ensure reliable and safe operation of trunk oil pipelines, to prevent illegal tie-ins and leaks. All these trends are reflected at the annual KIOGE exhibitions.
Even though the discovery of reserves at Kashagan was announced back in 2000, it was possible to establish sustainable production after several attempts only in 2016. The peculiarities of high-sulfur Kazakhstani oil, logistical difficulties, and the depth of hydrocarbons required significant investments and new engineering solutions.
The era of "easy" oil is in the past. This was stated by Vice Minister of Energy Magzum Mirzagaliyev (currently he heads the Ministry of Energy), speaking at KIOGE in 2015. Experts believe that the main oil and gas reserves are located at depths from 7 to 15 thousand meters. Mirzgaliyev stressed that production is becoming more complex and more expensive. The government started talking about a drop in production at the largest fields in 15-20 years for the first time. Geological exploration has come to the fore again.
In 2021, after a forced break due to the general situation in the world, KIOGE was held for the first time in the Kazakhstani capital – Nur-Sultan. Despite all the difficulties with air travel and the complicated procedure for issuing visas to foreign citizens, 156 companies from Kazakhstan, Russia, Austria, Bahrain, Great Britain, the Netherlands, and Croatia were represented at the exhibition. Kazakhstan was represented by 50 of these companies. The exposition with an area of 2700 sq.m. covered more than 13 areas of the oil and gas industry, including geology and geophysics, digitalization, non-destructive testing, engineering solutions, infrastructure development, and others. KIOGE 2022 is ahead!