How Can We Activate Geological Exploration?

He took an active part in negotiations with world oil and gas companies on geological and technical analysis of Kazakhstan's fields, including Tengiz, Kashagan, Zhetybai, Kalamkas, Uzen, and on the offshore blocks N, Isatai, Zhenis, Khvalynskoye, Tsentralnaya. Under his leadership, new deposits were discovered at the Urikhtau field and the Zhambyl offshore block (Zhambyl, Zhetysu structures).

With his direct participation, option 10c of further development of the Tengiz field (FGP), proposed by Kazakhstani specialists, was adopted. Under his leadership, in 2009, a geological and technical assessment was successfully carried out according to international standards when KazMunayGas acquired Mangistaumunaigas JSC, and in 2014, the KazMunayGas Research Institute for Production and Drilling Technologies was established. In 2015, as part of the transformation of Embamunaigas JSC, with his direct participation, the Uaz Intellectual (Digital) field project was implemented.

According to the estimates of the reputable consulting company IHS Markit, presented in the National Energy Report of 2021, as of the end of 2020, the residual proven and prospective (2P) oil reserves in Kazakhstan amounted to 26.5 bln barrels (about 3.44 bln tons). At the same time, their volume did not change significantly compared to the estimate for 2019 since no large fields were discovered during this period. A significant reduction in exploration spending during 2020-21 does not add to the optimism caused by a drop in oil prices on world markets due to the Covid-19 pandemic.

At the same time, the current situation in the Kazakhstani geological industry requires fundamental changes in its public administration. Doctor of Geological and Mineralogical Sciences, Laureate of the State Prize of the Republic of Kazakhstan, Professor of the Department of Oil and Gas Prospecting and Exploration of the Gubkin Russian State University (NRU) of Oil and Gas, Deputy Chairman of the Management Board of “KazMunayGas” Kurmangazy ISKAZIYEV tells about the problems and challenges of domestic geology and ways to solve them.

The most important and fundamental for the Republic of Kazakhstan are the oil and gas and mining and metallurgical industries, on the successful development of which the country's economic independence relies upon. The basis for the strengthening and development of these industries, in the long term, is the mineral resource base, for the development of which, at present, it is necessary to radically strengthen the public administration of the geological industry of Kazakhstan.

As known, the powerful mineral resource base of Kazakhstan was created for many decades under the leadership of the Ministry of Geology of the USSR and the Ministry of Geology of the Kazakh SSR. The specific nature of the geological industry lies in the fact that it is by definition costly. Secondly, the duration of geological exploration (exploration) from the initial preparatory phase to the discovery of deposits can range from 5-7 to 10-15 years.

At the same time, there are objectively geological risks that determine the average success rate of a commercial discovery of fields. This success rate in poorly studied areas of sedimentary basins is 15-18%, in areas with proven oil and gas potential up to 30%, and exploration areas near existing fields up to 80-90%.

In the 80s of the last century, Kazakhstan saw a significant increase in the volume of geophysical and drilling operations for the search and exploration of oil and gas fields. At the same time, the growth of budget funds was ensured by the redistribution by the USSR's Ministry of Geology of the revenue part of the budget created in the fields of Western Siberia. As a result, such large fields as Tengiz, Karachaganak, Zhanazhol, Kumkol were discovered, the main development of which took place in the 90s.

It is worth noting that the discovery of the largest Kashagan field was predicted for the first time in the late 80s as a result of seismic studies of the Embaneftegeofizika and Yuzhmorneftegeofizika (Gelendzhik) trusts. However, today the complex natural, geographical, and mining conditions, as well as the remoteness from the main oil markets of the world, objectively make the implementation of the North-Caspian Project (NCP) is relatively low-profit, complex in scientific and technical terms. Complex issues of ensuring environmental safety during the development of hydrocarbon deposits in the conditions of the closed Caspian Sea remain unresolved.

As a result of the adopted investment policy in subsoil use, a significant and most promising part of the country's territory for mineral prospecting was divided into hundreds of contract territories. 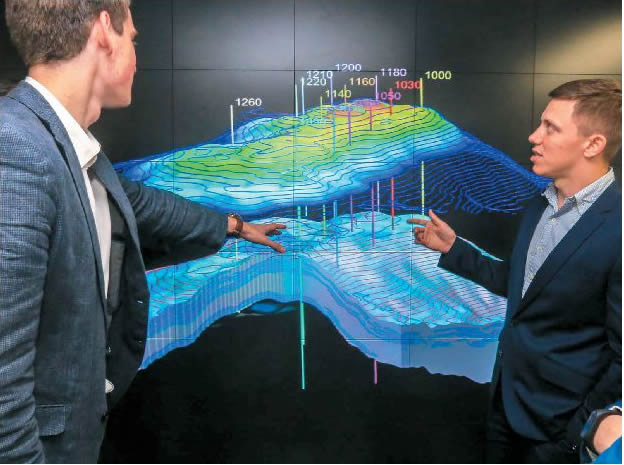 Hiding behind the well-known and not always lawfully applied principle of confidentiality, subsoil users, at their discretion, determine the timing and volume of information transmitted to the supervisory authorities about the results of the work carried out. The new geological details turned out to be closed for generalization and analysis in scientific research organizations of the country for systematic state geological study of the subsoil. The information vacuum that has arisen does not allow us to qualitatively analyze the newly obtained results of geological exploration both for individual objects and for entire regions and prepare adequate recommendations for government agencies on the strategy of replenishing the mineral resource base and further areas of work.

At the present stage of transition to a market economy, a significant decrease in the prepared promising structures, which are the reserve of the country's mineral resource base, has been clearly identified. There are serious violations and deviations from the scientifically justified sequence of stages of exploration, technologies, and regulations for the development of solid fossil and hydrocarbon deposits, control of which is possible only based on a complex of geological and geophysical measures and laboratory studies, including analysis of geological and hydrodynamic models of deposits.

The decrease in the fund of promising structures resulted from a sharp reduction in the financing of geological exploration by the state and the absence of a unified state policy. Further, this led to a decrease in the number of discovered fields.