Information-Analytical Centre of Oil and Gas JSC of the Ministry of Energy of the Republic of Kazakhstan is the official source of statistical and analytical reports on the oil and gas industry activities, oil, gas, and petroleum products markets.

Atyrau region is one of the largest industrial regions of the country and is rightfully considered a pioneer in the emergence of the oil industry in Kazakhstan. In the region, in 1899, a gush of oil at the Karashungul field flowed, which marked the beginning of the history of Kazakh oil. Commercial production began in 1911 at the Dossor field. Last year, the famous Dossor oil field celebrated its 110th anniversary.

Naturally, the core of the region's economy is the production of hydrocarbons. The region ranks first in terms of industrial production in the country due to the oil and gas industry indicators. According to the Bureau of National Statistics of the Agency for Strategic Planning and Reforms of Kazakhstan, it accounts for 12.3% of the GRP of the Republic of Kazakhstan (according to the results of 9 months of 2021) – the second place after Almaty.

Today, more than 25 companies produce oil and gas in the region. Still, such prominent companies as Tengizchevroil LLP and North Caspian Operating Company B.V. are the locomotive of the industry. In total, the two companies produced 42.8 mln tons of oil in 2021, about 90% of the region's oil production. These companies are developing the Tengiz and Kashagan fields, which are key players in the oil industry of Kazakhstan. Tengiz and Kashagan are among the three breakthrough projects in independent Kazakhstan's oil and gas industry. The Tengiz field is the world's deepest giant oil field. Kashagan is a giant offshore oil and gas field discovered in the past 40 years, and it is one of the largest fields in the world.

Embamunaigas JSC is another participant of the top three leaders of the oil and gas industry, which accounted for 5.3% of oil and gas condensate production in the region and 3% of the extracted raw materials in the country (2.5 mln tons). 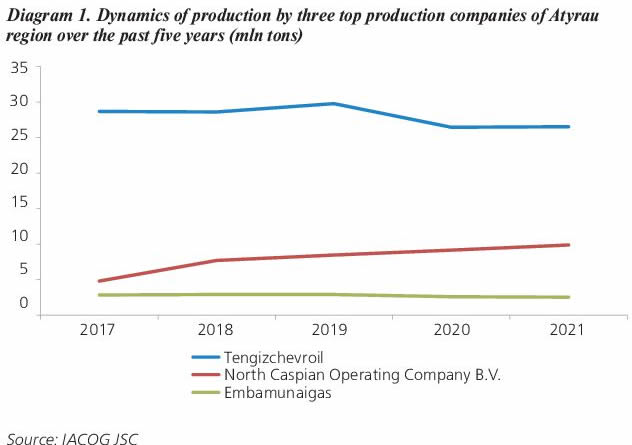