Implementation of offshore projects in Northern Caspian (along with the North-Caspian project), geographically adjoining to the territory of the Atyrau region, remains on paper so far. 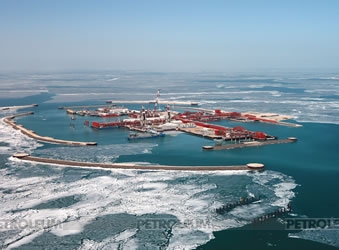 Toughening of conditions for potential investors, shallowness, as well as unpredictability of the ice movement in the winter period, problems with the delivery of goods to offshore facilities and a lack of drilling rigs, together with environmental vulnerability of Northern Caspian have become serious obstacles for conducting offshore operations.

The forecasted assessment of hydrocarbons potential in the Atyrau water area of Northern Caspian made by domestic geologists confirms the arisen representation about the great possibilities to discover here the large resources of oil and gas. Especially rich with hydrocarbons is the Pre-Caspian depression where can be concentrated from 7 to 15 billion tons – 75 % of all geological resources of the Kazakhstan sector of the Caspian Sea. The largest fields were forecasted here and discovered in the subsalt complex; now they are in the license development of NCOC.

However, it can’t be said that the resources of this geological region are fully opened. The other region of the water area in the Atyrau region, where it is possible to discover large oil fields, is the so-called North-Caspian rising (near the western coast of the Atyrau region, the sea analogue of the Buzachi peninsula). Under forecasts, there are placed here 20 % of resources of the whole Kazakhstan sector of the Caspian Sea.

For comparison, in the Mangistau water area, comprising two thirds of the Kazakhstan shelf of the Caspian Sea, there are concentrated 5 % of resources of the total oil potential of the Kazakhstan sector of the Caspian Sea. There are revealed 11 objects on Northern Caspian similar to such huge fields as Теngiz, Каrachaganak and Astrakhan. These objects lie at a depth of 4-6 meters and are accessible for deep drilling. At more shallow depths (1-2 meters), 60 various structures were revealed similar to the oil containing objects in the northern and eastern coast of the Caspian Sea. 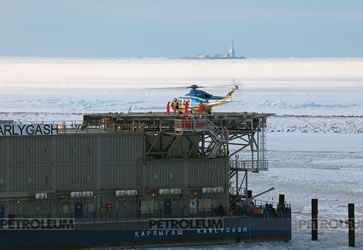 A very interesting picture is arisen from the analysis of features of placing the resources on the license blocks and operational territories. The Kazakhstan authorities have changed its political slant towards strengthening of national positions in the development of the Caspian Sea shelf, often ignoring the economic reasons to please the political ones. The basic condition for investors is that the national company receives 50 % and more in the projects, while financing of exploration projects are fully taken by the foreign investor.

Meantime, even if exploration drilling is successful, the Kazakhstan authorities do not give guarantees that a contract for oil production can be concluded with the investor. Also, the oil contracts signed earlier, under more soft legislation for investors, are cleaned up. The victim of the toughened policy became the PSA under the project South Zhambai-South Zaburiniye because of the failure by investors to fulfill obligations on exploration drilling during the license period.

The liquidation procedure has been started already regarding the operator of the Zhambaiproject, Zhambai LLP. However, the Ministry of Oil and Gas expects that by the end 2012 it will reach agreements with the foreign participants in the Zhambaiproject –- Spanish Repsol and Russian LUKOIL. 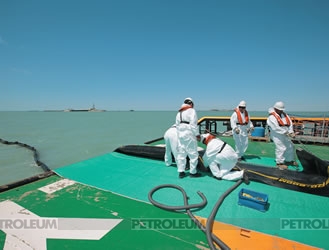 The new subsoil legislation has become an obstacle to achieve a final agreement with Norwegian Statoil for the site Аbai.The probable volumes of annual oil production from the field Аbai, under estimates, can reach 4 million tons of oil and 500 million cubic meters of gas. The expected geological and prospective resources of oil comprise: 607 million tons on the structure Abai; 125 million tons – on Aliya; and 28 million tons – on Аbai South.

The average depth of oil laying is 1300 meters in the Cretaceous sediments and 1800 meters – in the Jurassic sediments. The depth of the sea is 9.5 meters. The negotiating process lasts for almost ten years! The sides have succeeded only to sign an Agreement on the principles of the site’s development but not to sign the final agreement. And this is not the only example of the conflict of interests in the offshore projects of second turn.

Rather successful is only the project with the South-Korean consortium under the project Zhambyl. It is the only project where the sides have found mutual understanding. The total prospective geological oil resources by category Р(50) of the offshore site Zhambyl,in the estimates of KazMunayGas, comprise 1.036 billion tons of oil. Six above-salt structures were revealed on the site Zhambyl: Zhambyl, Zhetisu, Bibigul, Тuigun, Gaukhar and Eleonora. Of them, the structures Zhambyl and Zhetisu are the basic ones.

According to the results of reassessment conducted in 2004, the expected prospective geological reserves of oil at Zhambylcomprise 217 million tons of oil, and at Zhetisu–332 million tons. Productive sediments can lie in the depths. Probable volumes of annual production under the project are expected in the amount of 8-10 million tons of oil and 1 billion cubic meters of gas. The project’s expected total profitableness is $30-35 billion.