JSC KazMunayGas Exploration & Production (KMG EP), developing the fields in the Atyrau region, has faced the need to replenish resources. If at the Uzen field the signs of reserves’ exhaustion are only appearing, than the level of oil production from the majority of fields of revived JSC Embamunaigas is already on the last but one and last phase of exhaustion. 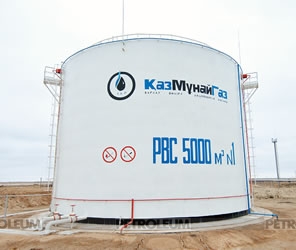 The oil production by the second, after Теngizchevroil,largest oil company in the Atyrau region is stably falling for already two years. In the last year, the level of oil production has fallen from 2 million 800 thousand tons to 2 million 100 thousand tons. And this tendency is only strengthening. In the forecast of the main geologist of JSC KazMunayGas EP Bazar Yeskozha, the sharpest fall in the company will occur in 2012. This reduction has been predicted and is not an unpleasant surprise for the company. The average debit on wells at the fields developed by Embamunaigasis 5.5 tons/ day. Only at some new wells the debit comes to 12 tons/day on average.

In total, there are 51 million tons of recoverable oil reserves on the balance of Embamunaigas. Of them, 80 % - 40 million tons - are concentrated at the Kenbai field. The major oil production is conducted only at three fields from 40 – Prorva(Nurzhan), Кеnbai and Маrtyshy (named after Balgimbayev). The previous technological failures under operation at the main field of Embamunaigas – Kenbai – noticeably affect the indices of the company’s production.

The number of workers of Embamunaigas does not yield to Uzenmunaigas- 7 000. In 2006, production was closed at the fields Коshkar and Komsomolskoye where the cost of production exceeded KZT 37.8 thousand per ton. Resettlement of residents from these oil settlements has not completed till now. The closing of exhausted fields can make ten oil settlements an epicentre for social disaster.

Under such gloomy prospects, the Atyrau region administration, Akimat, puts claims to the national company KazMunayGas and Samruk-Kazyna National Welfare Fund regarding the company’s low level of social investments into infrastructure of oil settlements. Their level at Emba is less than at Zhanaozen by 10 times.

According to the main geologist of JSC KMG EP Bazar Yeskozha, the company plans to increase its reserves up to 360 million tons of oil till 2016, and in a more remote prospect, to reach 800 million tons. “To date, KMG EP possesses over 200 million tons of recoverable residual reserves of oil,” he says.

The company wishes to increase its resources by participating more actively in exploration of new oil fields on land. First of all, KMG EP plans to study the fields on which it has a mining allotment. The talk goes about the structures including those located in the Atyrau region. The greatest prospects at Embamunaigas are connected with the subsalt sediments on the blocks Liman, Таisogan and P-9 (north-east to Теngiz).

KMG EP intends to develop six more geological blocks (East Маkat, etc.) in the Atyrau and Маngistau regions.“In southeast Caspian, on block P-9, in the next 5-6 years we expect to develop subsalt objects at a depth of 5-7 thousand meters,” informed the company’s chief geologist. “In the nearest years their amount will grow from 180 to 220 wells a year.”

Thus, the company expects not only to maintain a level of production, but also to increase it by stabilizing. However, a production level, if the issue of replenishing the reserves will not be solved, can sharply fall since 2012. According to the plan, Embamunaigas is going further to maintain the volume of annual oil production at the old fields. There is certain feedback from operations on the search of new fields. For instance, it was succeeded in the last couple of years to discover new pools at the fields Маrtyshy and Liman.