KazTransOil is in the first echelon! 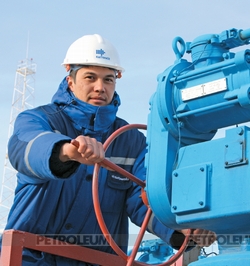 Since establishment of JSC KazTransOil by Decree of the Gov- ernment of the RK # 462 of April 2, 1997 (firstly, in the form of a closed joint-stock company and then, a joint-stock company), the company was and continues to be a key participant in the energy mar- ket. Alongside with the large oil extractive companies, it success- fully provides competitiveness of the Kazakhstan’s economy.

For the years of the company’s activity, the volumes of oil transportation via the pipeline system KazTransOil (KTO) have grown almost by three times (from 22.9 million tons of oil in 1997 to 66.9 million tons in 2011). Today, the company operates the system of the trunk oil pipelines totaling about 5.5 thousand km, directing 59 % of the total amount of oil produced in the country to the consumers. The length of the trunk pipelines of network comes to 7643.37 km, including 2148 km of water pipe- lines.

The capacity of tank farm is 1.259 thousand cubic meters. Within the system, 39 oil pumping stations and 7 oil heating stations are oper- ating; there are berths and railroad racks at the sea port of Aktau and 4 oil loading racks. KTO’s assets have been increasing for all 15 years. The company’s big achievements are such large-scale projects such as the commissioning of the oil pipelines Кеnkiyak-Аtyrau, North Buzachi- Каrazhanbas, Аtasu-Аlashankou and Кеnkiyak-Кumkol, as well as the expansion of capacities of the oil pipeline Аtyrau-Samara and the port of Aktau. As a result, the com- pany has managed to considerably expand the geography of deliveries of the Kazakhstani oil to the domes- tic and international markets. For example, the commission- ing of the oil pipeline Кеnkiyak- Аtyrau has considerably increased the volumes of transportation of Aktyubinsk oil in the direction of the oil pumping station Аtyrau.

The consignors have received a more reliable and economically profit- able alternative to rail transporta- tion. The project for the oil pipeline Кеnkiak-Аtyrau has been carried out by JSC Мunaitas in which JSC KazTransOil holds a 51 % interest and Chinese CNPC International – 49 %. Also, KTO signed a number of agreements with the operators of foreign oil pipeline systems that has expanded opportunities of Kazakh- stani oil deliveries. At present, among the partners are such com- panies as OJSC Transneft, OJSC Ukrtransnafta, Gomeltransneft and Novopolotsk oil transportation company Druzhba.

For all 15 years the company’s main priority has always been one: the high indices of production activity under providing environ- mental protection and occupational health and safety standards. Under operation of trunk oil pipelines the company should provide reli- able functioning of all systems of oil transportation and water supply, an uninterrupted work of oil heating stations, tank farms, oil pumping stations, the energy supply system and all other systems and produc- tion facilities. If to speak in detail about the com- pany’s priorities, one of the major is the growth of incomes and net profits. This block of tasks includes optimization of costs and increase in efficiency of capital investments.

On the whole, the strategic course is aimed at building a highly effi- cient oil pipeline company. There are some figures featuring the work of KTO. The company’s consolidat- ed proceeds have exceeded KZT140 billion in 2011 which is by 2 % higher the similar figure of the last year.

On the 2011 results, the consolidated volume of transportation of oil and refined products has exceeded 66 million tons, while the consolidated volume of turnover has come to over 42.2 billion tons (i.e, the total vol- ume together with subsidiaries and jointly controllable organizations proportionally to the share of KTO’s participation). Compared with 2010, both indices are higher by 2 %. As for consolidated profit, in 2011, it by 32 % has exceeded a figure of 2010 and has come to KZT25.9 billion.

The company has also summarized the interim results of production and financial activity for the first half of 2012. On such key indices as the volume of oil transportation and water supply, incomes and net profit, the plan’s ahead of schedule has been achieved. The KTO’s strategic goal is to increase its value. It is planned to achieve this, including among oth- ers, due to the following: Increase in the volumes of trans- portation of oil and water supply. The company plans to preserve and strengthen its position as the- largest oil transportation company in Kazakhstan by increasing the volumes and diversifying oil trans- portation routes and maintaining a high quality of rendered services.

To accomplish this, the company will attract new consigners and implement the program for inno- vation and technological develop- ment, including modernization of equipment directed at increasing the pipelines’ throughput capacity and their reliability and safety, and reducing operational costs. The company is committed to provide a reliable, uninterrupted and highly efficient oil transpor- tation meeting the requirements of consignors and is planning to increase the oil turnover up to 47 billion tons/km a year by 2020. This goal has been set proceeding from the planned growth in oil produc- tion in Kazakhstan, including from the Теngiz and Каrachaganak oil fields, and given the start of produc- tion at the Каshagan field.

Financial strategy aimed at increasing the profitability of busi- ness. The company plans to follow a financial strategy aimed at main- taining stable money flows, increas- ing production efficiency and reducing operational costs. The company also plans to implement the programs for costs management, innovation and technological devel- opment, and assets re-structuring in the 2012-2016 period. The company’s financial strat- egy will be implemented primarily due to maintaining a high level of money flows that will be ensured by the company’s investment policy, growth of incomes and optimiza- tion of costs.