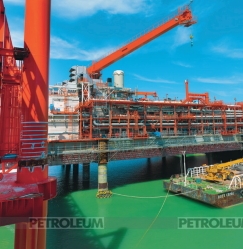 Kazakhstan hopes to discover a new large oil and condensate field, which size is comparable to  Tengiz field. However, not in the onshore, but  offshore. As expected, the works in Makhambet site, located in the offshore  of the Caspian Sea, performed by the Kazakhstan-Chinese company “Atyraumunaygaz”,  will turn to be  successful by 2014.

The Makhambet field is located  130 km from Atyrau and in 60 km from Ganyushkino, which is a regional center in the Northwest part of the Kazakhstani shelf of the Caspian Sea and in 50 km from the coast. As it was reported during KAZENERGY conference, which was held this summer in Atyrau and devoted to the Caspian offshore development, the Chief Geologist of Atyraumunaygaz LLP, Askhat Konysov said that “if we consider the greatest possible resources extracted from four largest subsalt structures (Makhambet, Makhambet Southern, Abylay khan and Zhambay-more) according to the analogy method with calculating parameters for the Tengiz field, such resources shall make about 775 million tons of hydrocarbons”.

The Atyraumunaygaz Company owns the rights for subsurface use for two offshore sites: Makhambet and Bobek. Both of them are located in the Northern part of the Kazakhstani sector of the Caspian Sea. Water depth here varies from 5 to 8 meters. The field’s potential is related to the Paleozoic sediments. Originally, Atyraumunaygaz LLP owned the rights for subsurface use of the large-scale Imashevsky gas field, which borders with Russia, but the field got the interstate status and was transferred to KazRosGaz Company in connection with the conclusion of the Kazakhstan-Russian agreement on boundary settlement.

The  Government of the RoK  transferred the Makhambet and Bobek fields to the Company under the change contract as the compensation. 100% of shares of the large extracting Company- JSC Mangistaumunaygaz, which is the shareholder of Atyraumunaygaz,  were acquired  in November 2009 by  the Mangistau Investment BV Company, where JSC KazMunaiGas Oil Company and the Chinese CNPC Exploration and Development Company Ltd participate on a parity basis. Therefore, Atyraumunaygaz became an offshore subsidiary of Mangistaumunaygaz.

The former management of "Atyraumunaygaz" was not especially concerned with investments into the geological exploration. In the summer 2010, because of the new owners and full change of the management team, the Company started the geophysical explorations. All historical and unhistorical data were processed and interpreted. As it is turned to be true, there is no commercial sense in development of the above-salt formations.

So, according to the forecasts, the above-salt formations of the Makhambet field are only 12 million tons, and those of Bobek are insignificant at all - only 1,2 million tons. This is nothing from the business point of view. Shallow water environment and other difficulties of the offshore oil production make the project implementation  unprofitable and senseless. It is particularly true given the fact that the the license was provided  for 6 years of exploration and 25 years of production. The decision was made to proceed with deeper researches.

In 2012 Atyraumunaygaz LLP signed the contract with the Ministry of Oil and Gas  on the extension of subsurface use rights for 2 years. Now the 3D data processing is going on. The decision is made to search for the “big” oil in a deeper level, in the Paleozoic formation at the depth up to 7000 m. Based upon the maps, presented by Askhat Konysov, the Company has already decided on the drilling locations. It is the Makhambet subsalt structure.