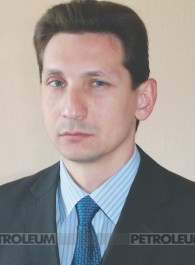 Zirax Company is one of the leading CIS producers and suppliers of well-killing fluids and acid solutions. A wide range of solutions for killing of wells based on pure synthetic salts of different density, as well as acid solutions based on synthetic hydrochloric acid for wells flowrate stimulation allows to solve effectively all the issues in this sphere (table 1).

Moreover, it is necessary to highlight new high-tech products aimed first of all at increasing the efficiency of traditional technologies for killing and stimulation of the flowrate of wells, as well as expanding the sphere of application of existing technologies.

One of the products related to the expansion of the sphere of application of acid solutions is Flaksokor 110. This acid solution is effective as a filter cake dissolvent and a destructor of the polymers while developing the wells after drilling (fig. 1) and successfully applied in number of oil and gas fields, particularly, in the Astrakhan region, as well as offshore fields [1, 2, 3]. And recently this acid solution has been newly applied as the destructor of the polymer gel while hydrofracturing operations.

One of the reasons for failure to reach the potential flowrate from producing wells after carrying out hydrofracturing is reduced due to the residual fracturing fluid value of the conductivity of proppant packing. The higher is average permeability of the reservoir, the more is effect of reducing that can reach up to 25-35%.

As a rule, the inner destructor is injected into the polymer composition for destroying the polymer and removing it from the crack of hydraulic fracturing, however, their own destructor are sometimes not enough, and the residuals of the primary structure of the polymer are still capable to cause significant clogging of pores after its degradation. In this case, if the polymer is still non-destroyed, the ultraviscous gel mass which is difficult to pump back into the well is formed clogging the pore space. 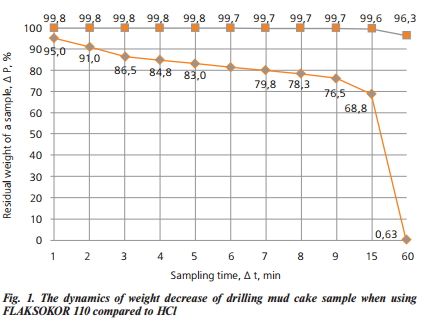 For destruction of such a polymer, Zirax Company produces two solutions, these are: reagent KDS-1 and above mentioned acid solution Flaksokor 110. The integrated reagent KDS-1 is a powdered composition comprising an effective oxidizer-destructor, surfactants, organic and inorganic clay stabilizers, demulsifier. Flaksokor 110 is a ready for use inhibited solution of concentrated hydrochloric acid with a special composition of surfactants and dispersing additives.

The effects of acidic solutions result in the rapid destruction of the polymer, and viscosity of gel decreases to the viscosity of water so it can be easily removed from the producing reservoir. The conductivity of the proppant packing increases accordingly. The most efficient solution is Flaksokor 110, it increases the permeability of the proppant packing (by 1.8 times) both in residual fluid of hydrofracturing with breaker, and while its’ absence (fig. 2). Retreatment with the use of reagent increases its efficiency (up to 2.05 times). 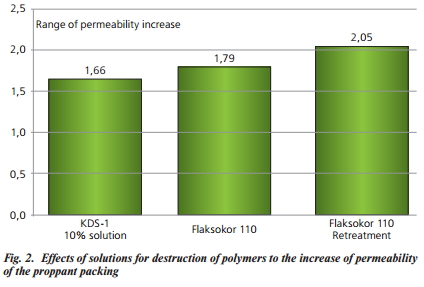 Solutions were tested in details both to the effectiveness of polymer destruction and the effect on proppant in RN-UfaNIPIneft LLC, in particular, for the oilfields of Western Siberia. The results show that the solutions of Zirax Company allow effectively solve the problem of increasing the efficiency of hydrofracturing operations and do not cause harm to the proppant within the treating process.

Next technology to be implemented by Zirax Company is aimed to overcome the negative consequences of the process of killing the wells, retention of properties of producing formation and especially the bottomhole formation zone (BFZ).

The residual water is initially reside in the producing formation, and later its’ significant volumes spread into the BFZ while process of drilling, killing the well, and overflooding the well with the outer-sourced waters. Part of the water is captured by the surface and capillary forces that is more typical for water-saturated formations, and thus in the bottomhole zone is formed a zone of high water saturation. And the more is the water saturation, the less is relative oil permeability resulting in reduction of the wells flowrate. By different estimations, the flowrate decrease can reach 40%. Also occurs the formation of true emulsions and expansion of the reservoir clay bond that reduces much more the flowrate of the wells. 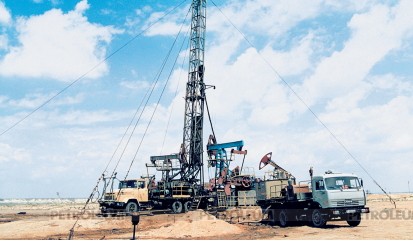 Zirax Company solved this problem by applying the technology Wotasoft which includes a well-killing fluid with a range of specific surfactants ensuring reduced impact of well-killing fluid on the state of the producing formation [4].

It is necessary to point out that the Wotasoft additive retains its stability in the solution at a wide range of temperatures and densities, it is compatible with any formation and technological fluids and has an inhibitive impact on the process of corrosion of the oilfield equipment.

Due to demulsifying ability of this reagent the stable emulsions are destroyed, and their re-generation is prevented. Reduction of boundary tension provides more rapid and complete removal of well-killing fluid from the formation when putting the well into operation. This effect is enhanced due to the hydrophobizated impact of the reagent which influences the capillary and surface effects in the porous space of formation, reduces the depth of capillary water imbibition of the formation and prevents deep penetration of well-killing fluids. Also due to the hydrophobization of surface of clay minerals contained in the formation it is possible to prevent their hydration and subsequent expansion.

The positive impact of Wotasoft reagent on the permeability of oil is confirmed by the comparative filtration experiments (fig. 4). After pumping a PelletOilWotaSoft solution, the pressure gradient becomes significantly lower proving the positive effect of Wotasoft reagent on the permeability of oil and saturation of water in porous medium. Well-killing fluids produced by Wotasoft technology have already been successfully applied to kill the wells in Russia and the CIS countries, and the results of the application show reduction of duration of operations starting up to two times in comparison with traditionally applied well-killing fluids. 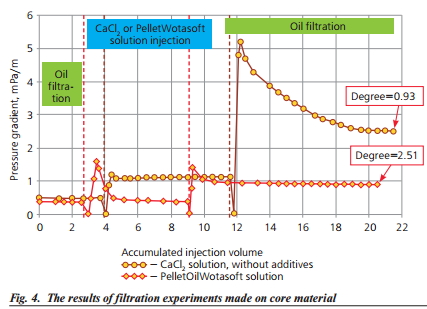 Thus, innovative technologies from Zirax Company are able to increase efficiency of oil and gas fields operations and intensify their production flowrate. 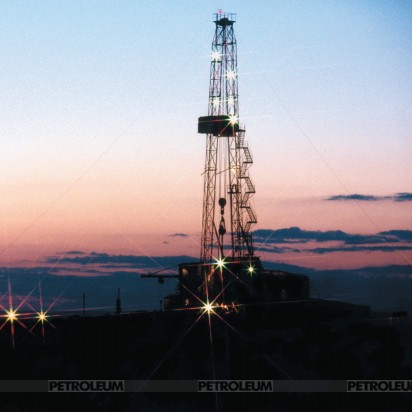 1. A. I. Mikov, A.I. Shipilov, V. A. Zhuravlev, R. Ye. Zontov New reagents for wells development after drilling operations, killing the wells by polymer solutions and hydraulic fracturing of formations / Book of reports of the 5th International Research and Practice Conference on “Modern technologies for carrying out workover operations of the wells and increasing oil recovery of the reservoirs. Development prospects”. Gelendzhik, Krasnodar Territory, 2010. - p. 207-210.

4. S. A. Demakhin Wotasoft technology for formation damage minimizing well killing / Book of reports of the 7th International Research and Practice Conference on “Modern technologies for carrying out workover operations of the wells and increasing oil recovery of the reservoirs. Development prospects”. Gelendzhik, Krasnodar Territory, 2012. - p. 35-39.