CPC Expansion is Given a Start!

The ministers have given a stert to the project

A solemn ceremony of the start of building works under the expansion project of the Caspian Pipeline Consortium’s oil pipeline took place on July 1, 2011 in the area of the oil pumping station A`tyrau in western Kazakhstan. The event’s significance was emphasized by participation in the ceremony of the Minister of Oil and Gas of the Republic of Kazakhstan Sauat Mynbayev, the Minister of Energy of the Russian Federation Sergey Shmatko, managing director on oil transportation of JSC NC KazMunayGas Nurtas Shmanov, the chairman of the board of OJSC A`E^ Transneft Nikolai Tokarev, shareholders representatives, as well as the top executives of contract companies. The Kazakhstan and Russian ministers gave a start to the welding of the first joint of pipes as part of the construction program under the CPC expansion project.

«CPC expansion project is of special significance for all participants involved in a great and many-sided work which was done jointly at all stages of the project implementation – from negotiations and designing to building and launching of the oil pipeline. CPC is one of the vivid examples of successful implementation of large-scale international pipeline projects,» Nurtas Shmanov, KMG’s managing director on oil transportation, underlined in his welcoming speech.

CPC expansion project envisages the increase in mechanical capacity of the main oil pipeline from 28 million tons to 67 million tons annually to export the increasing volumes of the Kazakhstan and Russian oil to the international markets. The final decision on investments into the expansion project up to 67 million tons of oil annually was taken in December of the past year at the meeting of shareholders in Moscow. Within it, the project’s all parameters were defined – from financial and economic issues to health, safety and environment performance. Expansion is planned to conduct in three stages by completing the project by 2015.

The cost of operations under CPC expansion will be estimated at $5.4 billion; these are fully the investments of shareholders. The agreement «pump or pay» will be a guarantee of financing the project and its reaching a profitability level under which the shareholders – extractive companies – will take obligations on loading the pipeline’s expanded capacities. Under failure to supply the system with oil in a stipulated volume, the extractive companies are obliged to pay CPC the amount of gain not received by the consortium.

The first stage of implementation includes modernisation of CPC’s existing facilities and replacement of 88 km of the pipeline in the territory of Kazakhstan, as well as building of the third remote mooring facility and three tanks by 100 000 cubic meters each on the sea terminal in the port of Novorossiysk. This will increase the system’s capacity up to 35 million tons in 2012 from the current 28 million. (At present, CPC pumps over 34-35 million tons of oil annually due to application of antifrictional additives). 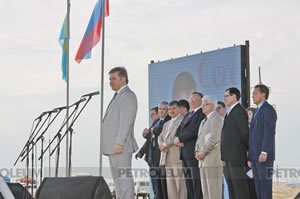 Initially the oil pipeline was thought out as a route of transportation of oil produced by Kazakh-American JV Tengizchevroil. Under establishment of JV the sides considered that oil produced from Tengiz will be pumped via the oil pipeline Atyrau-Samara, and further by transit via the territory of Russia. However, immediately with the start of production, it became obvious that these capacities will be insufficient. Besides, Russia, not interested in the appearance of a strong competitor in the international oil market, in the 1990s constantly limited the Kazakhstan quota to Atyrau-Samara thus seriously restricting the growth of production at Tengiz.