The Treasures of Atyrau 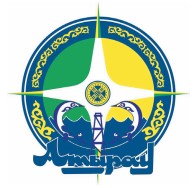 Atyrau’s coat of arms reflects its two treasures: oil and fish.  Missing from the coat of arms is one more treasure – the people.  As it turns out, Atyrau gave our country a panoply of talented figures who left a legacy in the history. 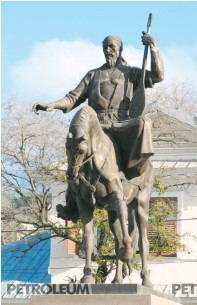 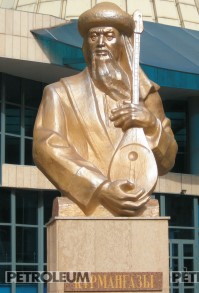 Let’s start with Kurmangazy – a great musician, dombra player, composer, and a central figure in the Kazakh music heritage.  He was born in early 19th century in Western Kazakhstan to a family of a poor nomad.  Dire poverty forced him to become a shepherd at the age of 6.  His early interest in music was disapproved by his father.  His mother, on the contrary, supported the interest.  The boy listened to visiting dombra performers with great engagement.  One of them – called Uzak – spotted the boy and predicted his bright future.  At the age of 18, Kurmangazy left home to become a roving performer.  He participated in multiple contests and developed his skill to the level of a recognized master.

In the 1830s he witnessed the Isatai and Makhambet-led insurrection and devoted one of his early pieces to it. The following pieces reflected people’s pursuit of freedom and their fight against the injustice.  Liberation and freedom turned into the core themes of his works.  As a result, he was frequently pursued by the authorities and prosecuted to imprisonment.  There he composed his masterpieces Alatau and Sary Arka -- both reflecting his deep reflections on independence.

Sixty of Kurmangazy’s pieces remain to date.  Many of them have turned into classics.  His playing techniques were progressive for the time and were carefully carried on by his disciples.  His heritage has greatly influenced the future of Kazakh folklore and the works of his followers.

The fact that the Almaty conservatory – as well as numerous other educational institutions, music units, streets and even a sizable oil find offshore Caspian – all carry the name of Kurmangazy speaks to the degree of his legacy.  .  One of the administrative districts of the Atyrau region proudly carries his name too.

Kazakh batyr Isatai Taimanov demonstrated his leadership skills since early age, such that he was appointed a leader of the Junior Horde when he was only 21. In 1836 together with his friend Makhambet, Isatai took the lead of a revolt. The revolt came up as a result of the lack of pastures and subsequent and progressing poverty of nomads.  Best land plots were regularly expropriated for new Cossack settlements. The remaining ones were distributed between Khan Zhangir and his suite.  Kazakhs grew desperate about an even distribution of land and started a riot against Khan Zhangir’s policy, but also against the ever growing Russian colonial dominance.

By the spring of 1837 the movement has spread to the bulk of the local tribes.  Regular Russian and Cossack military units counteracted and defeated the rebels in November.  The remnants together with the two leaders escaped into the steppe to set up a new rebellious unit.  In July 1838 another Russian punitive squadron far surpassing in the numbers entirely and permanently broke up the unit of 500 insurgents. This was Isatai’s last battle. He was riding full speed into the face of the enemy rifles and canons to find his death.  Even his antagonists could not help from speaking with profound reverence of him who, in the name of the freedom, faced canons lightly armed.

One of the administrative districts of the Atyrau region carries the name of Isatai, whereas a monument of Isatai and Makhambet is the center point of the Atyrau city.

One of the eminent representatives of Kazakh poetry of the 19th century Makhambet Utemisov was also born in Western Kazakhstan.  One of the sons of Utemis, an influential and well-off person close to the khan’s entourage, Makhambet with his agile mind, curiosity, sharp tongue and thorough knowledge of Quran stood out among his peers.

When an uprising broke out in 1836 in the Bokey Horde, Makhambet took the lead together with his friend and companion Isatai.  During the next two years an army of commoners confronted regular Russian troops and Khan’s henchmen – both of them greatly outnumbering.  With swords and spears versus rifles and canons they oftentimes scored victory.  Much of the credit for that goes to Makhambet’s inspiring verses.  Plain and to-the-point, powerful and incontrovertible, their bright metaphors had almost as much effect on the insurrectionists as Quran’s verses.

When Isatai was murdered in 1838, Makhambet managed to escape from his chasers.  However he wasn’t able to get the scattered warriors together.  For several years he was hiding in remote villages until being assassinated not far from today’s Inderbor village of the Atyrau region in 1846.

Makhambet was the first chanter of noble origin who openly supported the common folk. Per local poetic tradition, he composed his verses to commemorate important milestones in the life of the people.  This is why the portrayal of the revolt makes up the core of his works. His songs clearly mirrored the full course – from inception to culmination down to the fall.  A valiant hero and an ardent chronicler, his flaming verses reflect the seditious spirit of the day.  His name turned into the symbol of the nation’s ever-burning struggle and pursuit of freedom.  Another of the districts in the Atyrau region proudly carries his name. 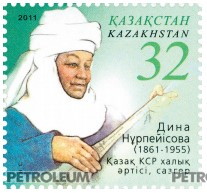 The word about a nine-year-old dombra player Dina Nurpeisova has spread so far around the steppe that Kurmangazy came to listen to her in his own self!  He left satisfied with her mastery, blessed her and afterwards would take her to dombra contests and never spared time showing her his pioneering techniques.  He remained her mentor and teacher until she got married at the age of 19.

Dina was born and raised in Western Kazakhstan, where she spent the most of her life.  Only in 1937 when she was 76, Dina Nurpeisova was found and brought to Alma-Ata.  The same year she was hired to the Kazakh Philharmonia and several years later was distinguished with the title of a People’s Artist of the Kazakh SSR.

In 1939, two thousand people participated in the All-Union contest for folk instrument players in Moscow.  Only 200 people made into the next round and only 53 – into the finals.  In the end nine performers won, including our Dina!

All her life she was polishing the skill to attain the highest level of finesse that made her an unsurpassed master of dombra.  She gave her last public concert in 1952 at the age of 91!  Dina’s pieces turned into the classics of Kazakh dombra art.

There are four recognized folk instrument orchestras in Kazakhstan, including the one from Atyrau named after Dina Nurpeisova. 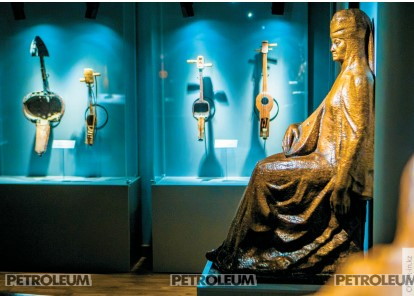 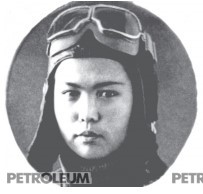 During the Great Patriotic War, a women-only aviation regiment -- the first of its kind -- was established in the USSR.  Its full name reads “The 46th Guard Taman Red Banner Night Bomber Aviation Regiment distinguished with the Suvorov medal of the 3rd grade.”  However, Nazis had a much shorter name for it: “The Night Witches.”  Hiuaz Dospanova from the Ganyushkino village of Guryev region, was one of them.  She became the first-ever Kazakh female pilot.

Being in school, she started visiting the local aeroclub. When the war started, Hiuaz learned about the newly established regiment for female aviators only.  She took the test – and was accepted!

The regiment had 115 women aged 17 to 22.  They flew on Po-2 models – a wooden biplane with two open cabins.  During the day, it was too easy of a target.  That’s why they would only fly in the night, making 5-10 trips every time.  Nazis called them The Night Witches, whereas the Soviet men jokingly nicknamed it “The Dun’ka’s Regiment” (because of the regiment commander Evdokiya “Dun’ka” Bershanskaya).

As a navigator and a sniper Hiuaz made 300 operational flights. Together with the regiment she went – or rather flew – all the way to Germany.  The Night Witches contributed to the liberation of Kuban, Taman, Novorossisk, Crimea, Byelorussia, and Poland.  The V-Day found her near Berlin at the age of 23.

A monument to the memory of the woman pilot was opened in Atyrau in 2010, while a street in Almaty and a Sports Palace in Atyrau carry her name.  Air Astana named one of its aircrafts in honor of Hiuaz Dospanova.