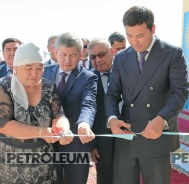 Socially responsible business is always interested in the sustainable development of the regions. That’s why the largest national companies finance the objects of social purpose, in addition to their production programmes, investing in human capital, and in fact, in the future of the country. The oil transport company KazTransOil is well-known by such approach, since it is systematically implementing the social support programme for the long-term period.

Gift for the anniversary of Independence

Another gift from the oil transport company to its compatriots was dedicated to 25-th anniversary of Independence of the Republic of Kazakhstan and it is the new kindergarten, opened in September 2009 in Sholakkorghan village, South-Kazakhstan region. The opening ceremony of the pre-school institution, built due to the sponsorship funds of KazTransOil, was attended by the General Director (CEO) of KazTransOil Dimash Dossanov, Deputy Akim of South Kazakhstan Region Zhakyp Bokenbayev, representatives of local executive bodies and partner companies.

"Today, together with Akim of South Kazakhstan region, we are opening a modern kindergarten for 280 places that completely meets all the actual requirements of urbanism and architecture. New preschool will be a real help for the young families, one of the largest areas of South-Kazakhstan region. We tried to anticipate every detail, so the children can feel as much comfortable as possible,"-said Dimash Dossanov, CEO of the company, speaking at the opening of the kindergarten.

A new kindergarten is located in a modern two-storey building, fully equipped with the newest equipment: music & karaoke centres, TVs, computers and all necessary furniture. Children are divided into 24 groups and the experienced teachers take care of them; three meals per day and full range of development programs are provided for them. New social object is equipped with music and gymnastic halls, medical room, playrooms and playground. A specialized correctional room is also available for individual lessons.

"This is a great gift from the company, many thanks to them. This kindergarten is a good example of social responsibility of business. It is a celebration for all of us. The Sozak district occupies the leading position in the involving the children in the pre-primary education. It is also planned to build two more kindergartens and to ensure 100 percent coverage of all children in the district", - said Zhakyp Bokenbayev, Deputy Akim of South-Kazakhstan region.

Just in one year, a great preschool, having all necessary items for the full development of children, appeared at this previously empty site. At the same time, a strict control was ensured at all the stages of construction works and after the opening ceremony of the kindergarten, all guests could visit the place and to see by themselves that the short period of construction did not affect the quality. Happy smiles on children's faces once again prove that such a good deed is not in vain.

May be due to young age, the children could not yet understand the significance of such gift, but the adults thanked the sponsors continuously. "I am very happy I remember those times when it was hard to place a child in a kindergarten. Now my grandchildren attend a new modern kindergarten and we are all very delighted. I would like to thank the people who invest in the development of our children," - said the local resident Onlasyn Ashykpaeva. 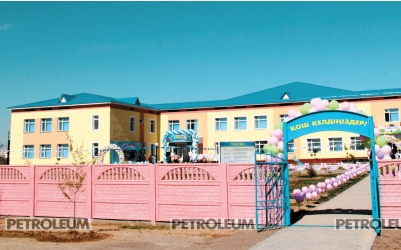 The pre-school institution, built in the village, is one of completed items in the waitlist of social projects to be implemented by the company. Sponsorship and charitable activities has been and remain one of the priorities of KazTransOil JSC. Supporting the socially unprotected groups of population, construction of social facilities and much more... Such multi-vector socially-oriented work of the company goes to the benefit of the entire local community.

Just few figures and facts. In 2014, KazTransOil JSC financed the construction of social purpose objects in the amount of 2 billion KZT, including: high school for 300 places in Kulsary town, Atyrau region, a kindergarten for 320 places in Pavlodar. Besides, three universal playgrounds for children and adults are built in Beineu district of Mangystau region, Akzhaiyk district of West Kazakhstan region and Kurmangazy istrict of Atyrau region with the assistance of KazTransOil.

It is difficult to overestimate the company's contribution to the social and economic development of Kazakhstan. The concern of KazTransOil JSC about the sustainable development of the regions is not only adherence to the accepted international standards, but also an understanding that the largest company of Kazakhstan cannot stay away from resolving the social problems. Together to the future!