The new conference format with an emphasis on practical sessions literally changed the atmosphere of the event, allowing the speakers and delegates to identify the problematic component of the industry’s daily work. The plenary session of KIOGE -2016 was devoted to the investment attractiveness of Kazakhstan’s oil and gas sector and the review of the medium-term market.

For the most acute technical topics of the industry the delegates cooperated in the round tables on the following issues: “Modern Technologies in Oil and Gas Exploration”, “Drilling and Extraction. Cost Optimization”, “Investment Agreements in New Market Conditions”, “Mutually Beneficially Cooperation as Part of Development of Kazakhstan’s Content”. New solutions and successful case studies were discussed at the sessions devoted to effective cooperation between oil, gas and service companies, the creation and development of the infrastructure in the fields, personnel matters.

The conflict of opinions and interests in the industry was apparent during the plenary session - the struggle with the crisis at the government level makes some of the market participants stronger, while weakens the others’ position. Magzum Mirzagaliyev, Vice-Minister of Energy of the RK highlighted that the key operators of the country are the priority for financial investments, legal and tax exemptions will be provided for the sphere of geological exploration, and the Ministry has been actively engaged in improving the legal and regulatory framework, economic and trade cooperation, harmonizing the national legislation with the international legal norms and standards, in addition, draft amendments to the new tax code were developed jointly with “KazMunayGas”. 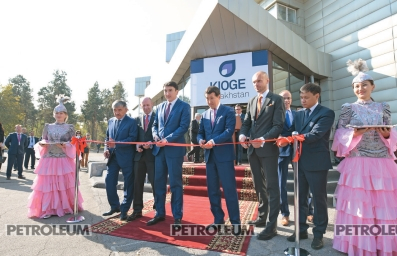 The drop in oil prices in 2015 hit hard all oil producing countries, but according to Galima Khusainova, General Director of “BRB INVEST”, the fall in production volumes (from 82 million tons - up to 75-77 million tons planned for this year) was observed only in Kazakhstan, while neighboring Russia has been increasing the production. In Khusainova’s view this happened owing to the policy of the Ministry of Energy, aimed at the promotion of the modernization and expansion of the projects of three major fields - Tengiz, Karachaganak and Kashagan. Thus, according to the report of the Ministry it is planned to invest 37 billion dollars only in the expansion of the Tengiz project, such capital intensive projects are currently frozen all over the world. Small and medium-sized oil producers and explorers were left without funding and felt the crisis to the full.

However, such imbalance in favor of the industry giants helps many oil service companies of Kazakhstan survive the crisis. As Rashid Zhaksylykov, Chairman of Presidium of the Union of Oilfield Service Companies “KazService” noted in his report, in 2015 due to the costs of the modernization the total amount of deals of contractor companies increased by 71 percent (compared to 2014). However, the same factor indirectly affected the reduction of costs of drilling and exploration activities - 41 per cent.

The issues discussed at the conference provide an opportunity to consolidate the processes in the oil community, as well as in Kazakhstan and beyond. Thus, the industry-specific plans of the Ministry of Energy are based on the Eurasian trends and features of sales.i 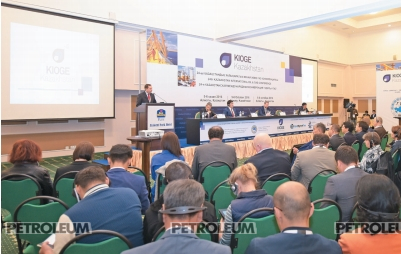 KIOGE-2016 Exhibition was attended by more than 200 companies from 25 countries. “Today we have a platform where we can meet, discuss problems and understand what new challenges face the oil and gas sector. Over the years, KIOGE has brought together more than a hundred thousand people, almost every second participant visits the exhibition every year, and everyone finds here something important for himself, - said Yerlan Aukenov, Deputy Akim of Almaty.

The most extensive and notable stands were traditionally presented by NC “KazMunayGas” and “Tengizchevroil” LLP. The new exhibitors this year accounted for nearly a third of the exposition, the pool of companies from the CIS was expanded, which shows that KIOGE confirms its reputation as an effective tool for promoting products and services and demonstrates the work of EurAsEC in real time!

Among the exhibitors from far abroad the largest exposition was demonstrated by the participants from South Korea as a result of signing the Memorandum on Cooperation between the Union of Machine Builders of Kazakhstan and the Korean Association of Machinery Industry KOAMI in 2015.

Following another new trend of KIOGE, the exhibitors are gradually moving away from describing opportunities to the demonstration of the real mechanisms of using high-tech displays and designs, as for both new and regular participants it is an opportunity to keep abreast - to demonstrate their developments and get to know the innovations of the market partners. The companies are actively investing in the presentation of their products and services, as KIOGE has long confirmed the effectiveness of these investments.

As Akshin Rakhimov, Manager of Caspian Marine Services Limited said in his interview, “the participation in the exhibition offers an opportunity to study the market in the Caspian region. We are in search of potential partners in Kazakhstan and we hope to expand our market”. Svetlana Koroleva, Representative of “Transneft” PJSC, a regular participant of KIOGE, stressed that “an exhibition is getting to know new companies and the possibility to hold direct negotiations with potential partners, this year we have taken advantage of this opportunity again”. A new exhibitor at KIOGE, Global Gazstroy highlighted the impressive scale of the exhibition.

Due to the signed memoranda and contracts, the expansion of international cooperation KIOGE stands out from other exhibitions – it is the unique platform for discussing issues related to the development of the fuel and energy complex and demonstrating advanced technological solutions for the oil and gas sector, as, despite the reduced program of this year, the number of visitors has not decreased.

The exhibition was held with the active support of the key operators of the country - NCOC, Karachaganak Petroleum Operating BV and “Tengizchevroil” LLP.

i According to Octavian Stamate responsible for the energy policy issues of the Department for Sales of the Delegation of the European Union to the Republic of Kazakhstan, in Germany every third liter of gasoline, which motorists buy, is produced from Kazakhstan’s oil. Kazakhstan is the third largest oil supplier, which is not a member of OPEC following Russia and Norway.