Reduced production rates of wells due to the deterioration of reservoir properties is one of the concerning issues in oil and gas field operation. Reduction in porosity and permeability of reservoir and especially its bottom-hole zone (BHZ) can occur during drilling, low-quality development and well killing, as well as during their progressive watering out. The use of high quality oilfield chemistry and advanced technologies enables minimization of the negative impact of the above factors and facilitates the operation of wells, increases their production rates and extends their field life.

Group of companies Zirax is one of the largest manufacturers of products and solutions in the field of oilfield chemistry in Russia and the CIS and includes production, research, and service companies. Such cooperation provides an opportunity to implement a full range solution for development and implementation in respect of oilfield chemistry, and ultimately results in provision to the customer of the highest quality products and efficient technologies for their application. The main activities of Zirax group of companies are chemicals and technologies for well killing, stimulation of oil and gas production, water suppression and oil recovery enhancement (Fig. 1), as well as creation of conditions and technologies for their most efficient use in the oil production process. 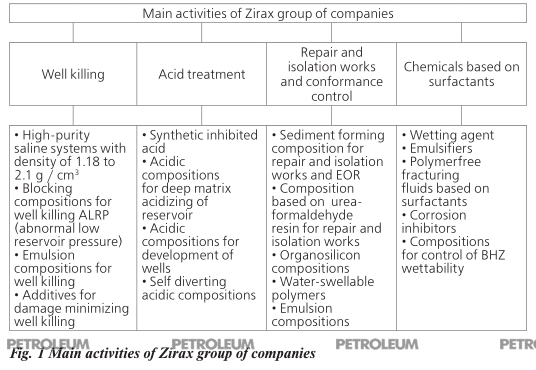 One of the latest innovations is FLUXOCOR 110 a solution used for post drilling well development and for cleaning after hydraulic fracturing operations from polymer gel residues [1-3]. During the drilling process tight polymer clay cake is formed on the surface of wellbore wall and the liquid phase of drilling fluid with dissolved chemical substances forms an extended area of penetration, whose permeability is significantly lower compared to the initial permeability. Acid composition of FLUXOCOR 110 easily breaks mud cake, which is often formed on the surface of the collector (Fig. 1), which increases the reservoir connectivity with the well and ensures its rapid absorption. 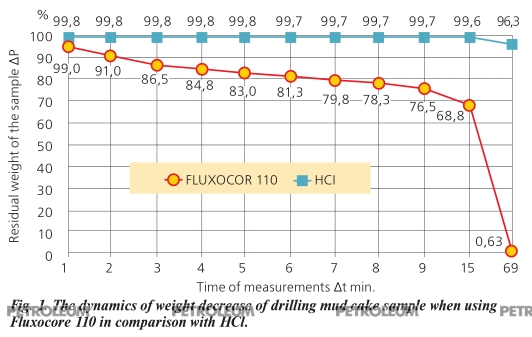 Fig. 1. The dynamics of weight decrease of drilling mud cake sample when using Fluxocore 110 in comparison with HCl.

Application of this acid composition after hydraulic fracturing operations allows for an increase of fracture conductivity and an increase in the flow of hydrocarbons into the well. Treating one of the wells of Priobskoye field with acid composition in a volume of 12 m3 allowed to produce additional 1488 tons of oil in 4 months only, and this effect is still continues (Fig. 2). 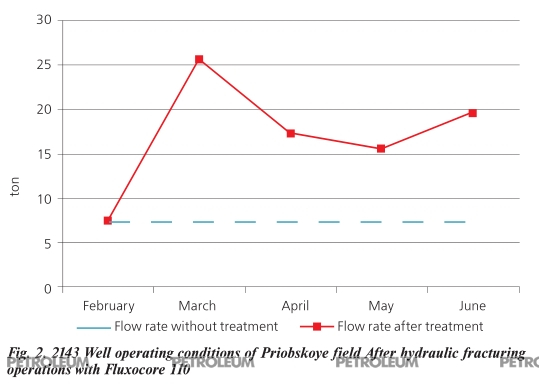 Since 2014, the company Zirax together with MI-Swaco Company (Schlumberger) actively introduces well killing technology based on specific blocking compositions (block-packets) that allows for the liquid absorption control into the reservoir [4]. This technology is particularly relevant in killing of wells with abnormally low reservoir pressure (ALRP), since well killing with conventional liquids in case of intense absorption is more difficult, due to the considerable increase in the required volume of salting liquid and existence of risk of oil and gas blowout. Similar difficulties arise upon killing multi-pay wells of different reservoir pressure. In addition, absorption of liquid into the collector results in deterioration of filtration properties of the reservoir, complicating the development of wells after repair works. To restore the influx of hydrocarbons from the reservoir where additional works on the effects on the BHZ are required, which are associated with extensive investment of money and time.

Temporarily blocking composition is a specially selected system based on water-salt solution with the addition of polymers and fractionated colmatant (calcium carbonate). This combination of components allows for creation of a solid colmatant filter cake on the surface of the porous medium (Fig. 3) which is impermeable for filtering aqueous solutions.

Fig.3 Filter cake of the temporary blocking composition on the surface of porous medium

Fig.3 Filter cake of the temporary blocking composition on the surface of porous medium

n the process of killing the well, such filter cake is created in the perforation zone (Fig. 4), thereby preventing deep penetration of well-killing fluid in the reservoir. Upon commissioning of the well, the blocking compositions can be easily removed from the well with minimum pressure drawdown (stimulation) and taken to the surface by reservoir fluid. Removal of the filter cake does not require any disintegrators or disruptors, but if necessary, all the components of the blocking composition can dissolve in acids.

T he filter cake of blocking composition retains its properties for at least 20 days at temperatures up to 120°C, which allows for a wide range of work in wells with different geological and temperature conditions. It should also be noted that the compositions are fully compatible with all types of reservoir fluids and rock.

Fig.4 Operation principle of a block packet during well

a) absorption can be observed during well killing without a block packet;

b) the well is killed with application of block packets, there is no absorption;

c) the well is commissioned and quickly put into operation. 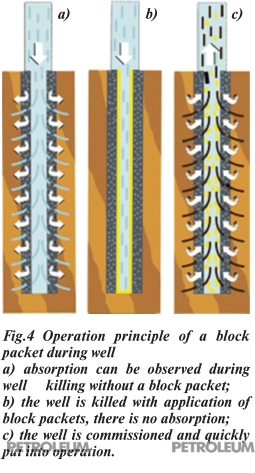 Prospective areas of activities for Zirax are compositions for repair and insulation works and water suppression to address issues associated with negative impact of drowning of wells on the productivity of oil and gas wells.

Sediment forming composition Tamolex for selective isolation of water-influx, flowing in from the productive reservoir and for conformance control. Deposition of sediemnt occurs when chemical solution reacts with mineralized reservoir water or a solution of calcium chloride, thereby blocking ingress of water in water-saturated interlayer (Fig. 5). Sedimentation does not occur in the oil-saturated part of the reservoir due to its solubility in hydrocarbons.

Backfill solution Karbolex based on urea-formaldehyde resin designed to eliminate production casing leaks, behind the casing leaks, tapered off water influx and shutdown of washed and saturated interlayers. High penetration ability enables performance of repair and isolation works in conditions where conventional cement compositions are ineffective. 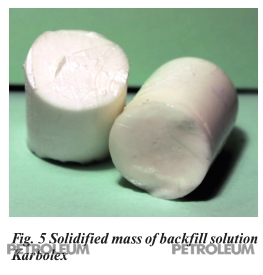 Resin, is a white liquid that after mixing with special additives and cured over time forms into a solid rubbery mass (Fig. 6). The composition has been successfully used by Zirax-Nefteservice for the elimination of leakages in the production casing and behind the casing circulation in high temperature (130 – 1500°C) wells of Stavropol Krai [5].

New reagents and technologies for solving concerning issues in the operation of wells, allow not only to maintain their porosity and permeability properties of productive reservoirs, but to increase the production rate of wells and reduce their water content. 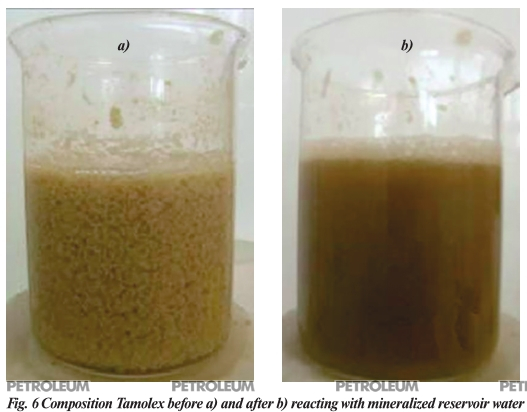 Fig. 6 Composition Tamolex before а) and after b) reacting with mineralized reservoir water