The 25th Anniversary International Oil and Gas Exhibition and Conference - KIOGE 2017 was held on October 4-5 in Almaty, Kazakhstan. More than 250 companies from 25 countries participated in this significant event. Industry specialists note that for a quarter of a century the KIOGE event has become an autumn tradition within the oil and gas community and express their huge gratitude to the organizers for the opportunity to discuss the pressing issues of the oil and gas industry. 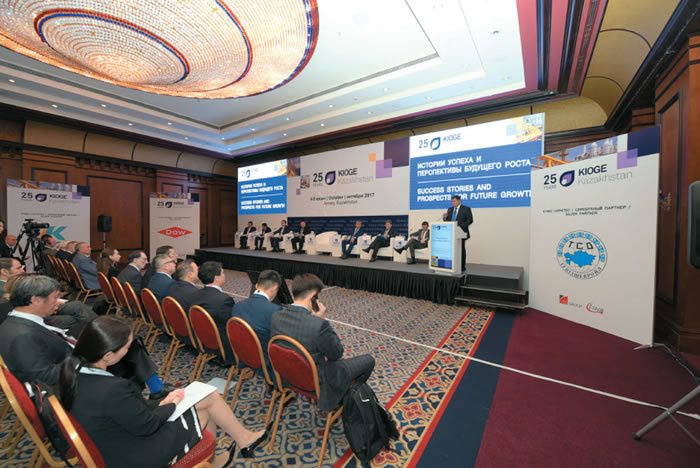 KIOGE is an excellent platform to hold meetings with potential partners and share experience with specialists from different countries. One of the important topics for discussion this year was the state of the extractive sector of the Republic of Kazakhstan and the prospects for its development.

Anuar Zhaksybekov, Chairman of the Board of Embamunaigas JSC, presented his vision for the future of the country’s production industry. Embamunaigas has a 95-year history and therefore vast experience both in theory and in practice of geological research, exploration and production of hydrocarbon raw materials. The Head of the company believes that it is necessary to reduce production costs and increase the operating factor of wells by optimizing the operation of the equipment. The implementation of the transport logistics project allowed Embamunaigas to reduce fuel consumption by 20%. In addition, since 2015 the company is paying special attention to training and internships for its employees in leading foreign specialized universities.

Another topical issue discussed at KIOGE 2017 was to develop an “environmentally friendly” world economy. More and more attention is paid to alternative sources of energy. According to experts by 2050 about 70% of cars will be electric. The cost of lithium-ion batteries can be reduced by 5 times. The demand for electricity will increase to 45%. And it will be possible to observe a temporary decline in oil production. Why temporary? Because experts believe that with a competent approach this respite will allow us to find new directions for the development of the oil and gas sector. Mikhail Novikov, General Director of EAGE in Russia and CIS countries, offers to explore non-traditional resources, for example, to study the oil shale rock and its properties. 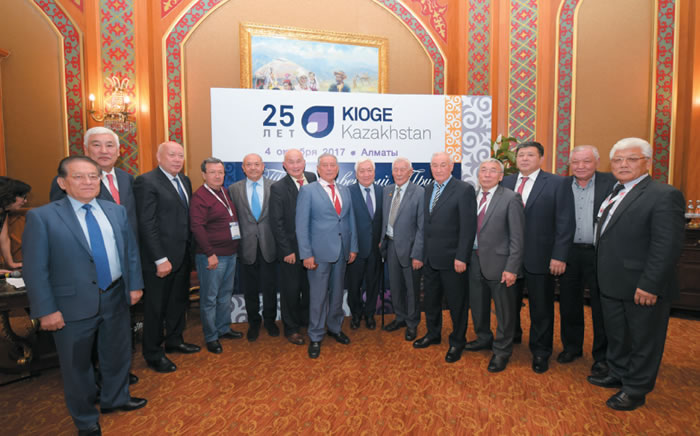 Many oil and gas companies in the world in recent years have faced a number of challenges caused by a sharp decline in oil prices in 2014 and such factors as slowdown of global demand in energy resources, a shale revolution, and active development of renewable energy. The Regional Director of Norwegian Energy partners - Vladimir Ryashin provided experience in solving these issues to his audience. According to Mr Ryashin, Norway coped quite quickly with new tasks in these conditions. The turnover of the oil and gas business in 2016 amounted to 500 mln Norwegian kroner, which is about 70 bln Euros. Norwegian Energy partners propose to take into account the Norwegian offshore experience in severe climatic conditions. The project is aimed at reducing the costs of production of new technologies and reducing the timing of its implementation. The countries where this project can be used are Kazakhstan (Northern Caspian Sea), Greenland, Canada, Norway, USA (Alaska) and Russia.

The representative of Kazpetrodrilling JSC Tlek Kadyrov proposes to use the technologies that will allow us to conduct deeper exploration drilling up to 7,000 meters. In addition, ambitious project of the company involves the use of directional and horizontal wells.

The experts’ opinions are unanimous in that it is necessary to increase production, while significantly reducing costs. The Future Expansion Project - Wellhead Pressure Management Project (FGP-WPMP) is implemented by Tengizchevroil exactly for these purposes. According to Murat Mukashev, Deputy General Director of TCO, this is a unique project on a global scale. In 2016, the Ministry of Energy approved this important for the country’s economy project. It must ensure an increase in oil production by 12 mln tons of oil per year. Within its framework, support will be provided to domestic companies, manufacturers of goods and service providers will receive orders for the amount of 12 mln US dollars. Additional workplaces will be created. As of today, 4 thousand vacancies have been placed. 27 thousand Kazakhstan workers have already been involved in this project. 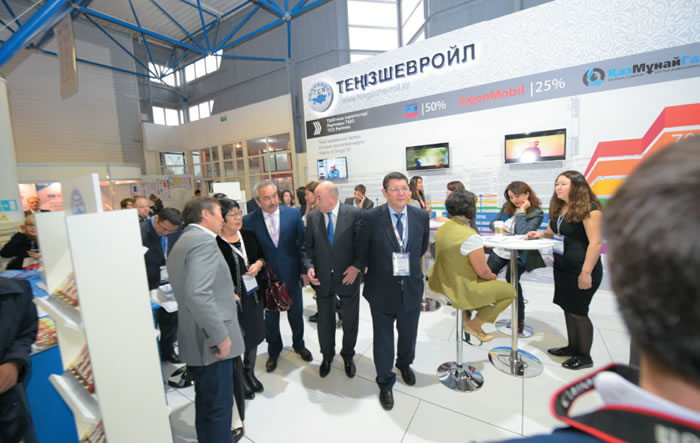 Another major project that is important for the oil and gas industry of the Republic of Kazakhstan is the North Caspian, which is implemented by the NCOC. According to Zhakyp Marabayev, Deputy Managing Director of the NCOC, since the successful restart of the Kashagan field in autumn of last year, about 6.78 mln tons of oil and more than 4 bln cubic meters of gas were produced. The current level of oil production exceeds 200 thousand barrels per day. The expected volume of production this year will be 8 mln tons of oil and 4.5 bln cubic meters of gas. This project provides excellent opportunities to disclose the potential of domestic companies and involve them in the project. About 70 joint ventures and partnerships between Kazakhstan and international companies have been created. During the period between 2004 and 2016, total payments to local suppliers of goods, works and services amounted to more than 13.3 bln US dollars, from which in 2016 - 757 mln, representing 28% of the total costs.

With a view to further develop Kashagan, the Ministry has supported the project on the increase of the volume of gas re-injection, which involves the construction of an additional gas re-injection compressor and the modernization of existing compressors to increase their productivity. 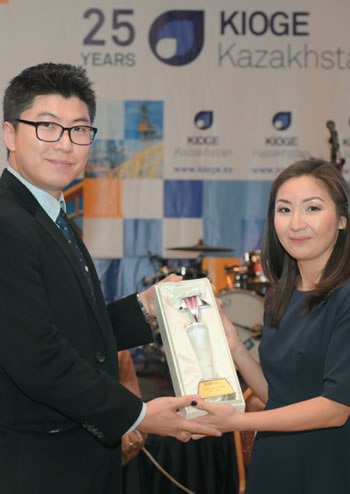 According to Makhambet Dosmukhambetov, First Vice Minister of Energy, the new project will allow to increase the number of workplaces for an additional 2,000 people during the construction period, and also raise the level of oil production from 370,000 barrels to 450,000 barrels per day (2024-2030).

The operational cycle of Phase 1 of the Kashagan Field Development Project will take dozens of years and it is expected that the project will bring billions of US dollars of direct income to the country in taxes and a share in the production volume.

In general, according to experts in Kazakhstan an increase in oil and gas production is observed. The First Vice Minister of Energy, Makhambet Dosmukhambetov notes that Kazakhstan companies have managed to adapt to the new market conditions. In 2016 domestic companies achieved record production figures - 27 mln tons of oil. And during 9 months of this year the oil production amounted to more than 19 mln tons of oil, which is 5% higher than the planned target. In 2017, the expected production volume will be 28 mln tons of oil and 15 bln cubic meters of gas.  He also stated the implementation of the large-scale projects - the FGP in Tengiz, Karachaganak Expansion Project, and the development of the second phase in Kashagan - has immense potential for the country and for Kazakhstan business.

In view of this, in August 2016 the Ministry created the working group, within which active work to involve domestic oilfield service companies in these major oil and gas projects is underway.

On such an upbeat note, the 25th Anniversary Conference KIOGE came to an end. Along with that, the exhibition comprised of more than 200 companies. The exhibition was opened by the First Vice Minister of the Republic of Kazakhstan, Makhambet Dosmukhambetov, who noted the high importance of the KIOGE project for the oil and gas industry of the country. Within the framework of the exhibition, the seminars of the leading companies and universities of the Republic of Kazakhstan were held. The overview provided comprehensive answers for participants. Also, in the framework of the B2B meetings during the exhibition, companies from different countries were able to source partners for joint projects, hold negotiations and sign contracts.

The KIOGE 2017 Exhibition and Conference is held with the official support of the Ministry of Energy of the Republic of Kazakhstan, the Local Administration of Almaty City, National Company KazMunayGas JSC and the Union of Service Companies of Kazakhstan. 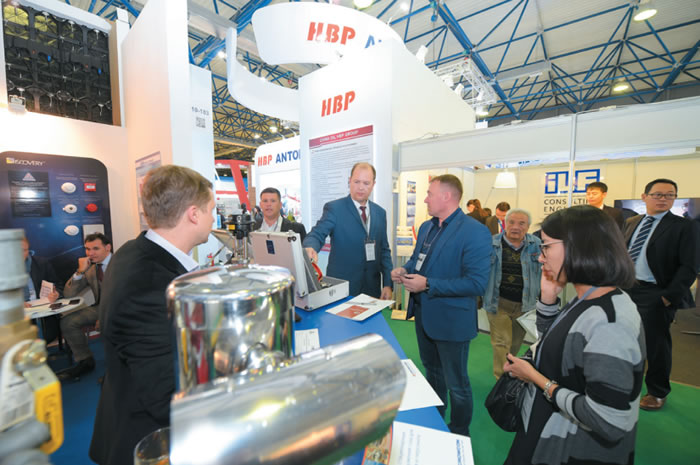