Zhaikmunai LP, engaged in oil and gas production in the northwest of Kazakhstan, completed construction of a gas refinery. According to the press- release, the working commission consisting of the representatives of Zhaikmunai, its contractor KazStroyService (KSS), general developer of the project NIPINefteGas and seven state departments of the Republic of Kazakhstan, took an official decision that the plant’s construction is completed in accordance with the Kazakhstan standards and is ready to be submitted to the state acceptance commission for a final acceptance. Launching of the plant allows Zhaikmunai to process associated gas and gas condensate. The facility was built by the Kazakhstan engineering company KSS and American Exterran. As the plant reaches full capacity, the company’s total volume of production will grow up to 48 000 barrels a day from the current 7.4 thousand barrels. According to Zhaikmunai’s report, in 2009 its proceeds comprised $116 million and EBITDA – about $50 million.

The main asset of Zhaikmunai is the Chinarevskoye field (274 sq. km) located in the northwest of Kazakhstan, 60 km from the border with the Russian Federation. The company’s papers have passed listing at the London Stock Exchange. The company is controlled (67 %) by the chairman of its board of directors Frank Monstrey.

On October 5-6, the V Eurasian Energy Forum KAZENERGY- 2010 was held in Astana - one of the most prestigious events in the energy industry of the Caspian region. The main theme of the Forum: “Eurasian Energy Map: Balancing Risks and New Opportunities”. Representatives of central state bodies of some countries, as well as the heads of the largest international energy organizations and companies took part in the Forum.

JSC NC KazMunayGas informed about successful completion of reconstruction of the catalytic cracking unit at the oil refinery Petromidia which is part of The Rompetrol Group (Constanta, Romania). «With the aim of major overhaul, NC КМG plans to realize 61 projects at Oil Refinery Petromidia and to conduct revision of the whole process equipment in order to increase its efficiency and reduce emissions into the surrounding environment. Operations are carried out with attraction of the general contractor – Rominserv company,» is said in the information released by the company’s press-service.

Implementation of the project for reconstruction of catalytic cracking unit is carried out as part of the Program - 2010 the purpose of which is to increase the plant’s operational productivity by 28 % (from 3.9 to 5 million ton/year) with replacement of physically worn out equipment. Also, the plans include production of diesel fuels by 9 % (from 36 % to 45 %), observance of requirements on preservation of the environment under achieving Euro - 5 quality standard of the whole volume of motor fuels under 100 % processing of sulphurous oil and given the ecological requirements of the European Union and Romania. This reconstruction will allow the plant to process crude of other qualitative structure being a product of soft hydrocracking process. Also, production of valuable propane-propylene fraction for further release of petrochemicals will increase.

The project was commenced in 2007 on the basis of the major project of the licensor of technology – the company UOP with introduction of recent achievements in the field of cracking technology – concepts VSS in reactor (Vortex Separation System). The producer of the new reactor is Walter Tosto, a European supplier with lengthy experience in manufacture of similar equipment, which has successfully transported the reactor from the port of Ortona to the Adriatic Sea up to the Media port on the Black Sea. «As a result of this project, NC КМG will receive advanced technology of catalytic cracking in Romania and Eastern Europe,» informed KMG’s press-service.

JSC KazMunayGas Exploration & Production (КМG EP) informed about winning a tender to develop the gas field Аkkas located in the Republic of Iraq together with Korea Gas Corporation (KOGAS) within the third license round organized by the Department of Contracts and Licenses of the Ministry of Oil of Iraq. A tender proposal provides a level of extraction on the plateau amounting to 400 million cubic feet of gas a day and a fee rate of $5.5 per barrel of oil equivalent.

In accordance with the conditions of the third license round, a 25 % asset will belong to the state company of Iraq, while the rest will be divided on a fifty-fifty basis between КМG EP and KOGAS (37.5 % /37.5 %). The consortium participants intend to conduct negotiations with the Government of Iraq and conclude a contract for development of the Akkas field in the nearest months.

The Akkas field is located in the western part of Iraq in the province of Anbar, near the border with Syria. According to the Ministry of Oil of Iraq, the field’s reserves are estimated at 5.6 trillion cubic feet of gas.

The Presidents Dmitry Medvedev and Gurbanguly Berdymukhammedov agreed to suspend the construction of the Pre-Caspian gas pipeline to deliver 30 billion cubic meters of gas (from Turkmenistan to Russia through Kazakhstan). This project was approved by the countries in 2007 and was reviewed as an alternative to European Nabucco around Russia. Its cost is estimated by the Ministry of Energy at $7 billion. «Construction is postponed in order to wait for increase in demand for gas in the EU market,» stressed the Vice-Premier Igor Sechin: «In the next 3-4 years the European market will grow in small volumes.»

JSC KazMunayGas Exploration & Production informed about the discovery of the oil deposit on the exploration block Liman. The field is located on the southern slope of the salt dome Novobogatinsk, in direct proximity from the oil field Novobogatinskoye Southeast being developed by Embamunaigas and located in 70 km to the west from Atyrau.

The flush inflow of oil was received in the first exploration well at a depth of over 1200 meters from the middle Triassic sediments. The well’s daily production yield is 24 m3 under 5 mm choke. In the passed section it is forecasted the presence of three more additional productive layers. Discovery of light oil 34 API in density indicates the available potential of the above-salt sediments in the region in which the company conducts currently a large-scale 3D seismic survey in the volume of 300 sq. km. It is planned by the company’s program of works for 2011 a detailed study and assessment of stocks of discovery for rapid launching into development.

Russian - British ТNК-ВР has refused from the idea to purchase Pavlodar Petrochemical Plant in Kazakhstan. «The company does not conduct negotiations on this theme,» informed to the journalists ТNК-ВР’s chief financial director Jonathan Muir. «There are no active negotiations on Pavlodar PPP,» quotes Muir RIA Novosti. In this summer, unofficial information was spread in the mass-media that ТNК-ВР can be the most probable buyer of Pavlodar PPP. It was informed that also other Russian companies participated in negotiations with the authorities of Kazakhstan, in particular, Gazprom Neft. Then, the acting head of ТNК-ВР Maksim Barsky said that ТNК-BP was interested in the purchase of Pavlodar PPP, but only together with a network of gas stations.

On October 29 public hearings were held in Aktobe on Environmental Impact Assessment (EIA) to the Project for pilot commercial development of the gas condensate deposit with oil rim of the Urikhtau field. Representatives of the local executive and representative bodies, JSC NC KazMunayGas, department of natural resources and nature management regulation of the Aktyubinsk region, as well as public organizations and veterans took part in public hearings.

«The project for pilot commercial development of the gas condensate field with oil rim of the Urikhtau field» has been elaborated by the design institute JSC КаzNIPImunaigas. The EIA project was elaborated by the specialists of Olympex Advisers LLP. Submitted project reviews possible impacts on the components of the environment because of pilot development of the Urikhtau field. It contains also a plan of measures on minimizing consequences of Operator’s economic activities on the environment.

The government of the RK has approved the Program for development of the oil and gas sector in the Republic of Kazakhstan for 2010 - 2014. The program defines a circle of important tasks of the industry in the reviewed period and, accordingly, forms a complex of interconnected organizational, rule-making, economic, social, financial and other measures directed at their decision. On the results of the Program’s implementation, it is supposed to increase, through enhancing efficiency of the industry’s functioning, a social and economic effect from the growth in production and processing of hydrocarbons, to provide a rational use of oil and gas resources, growth in international transit and achievement of the country’s full energy independence, as well as uninterrupted and full provision of the demand of the home market for petroleum products and gas. 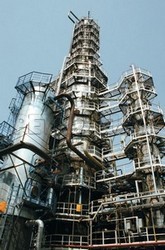 The Kazakh Institute of Oil and Gas completed a report under the project for renewal of the comprehensive plan for development of the coastal strip of the Kazakhstan sector of the Caspian Sea. Originally, the plan was elaborated in 2005. However, considerable changes occurred for these years in the development plans of the Kazakhstan sector of the Caspian Sea and creation of coastal infrastructure. Also, the data were changed on the expected stocks of prospective structures and fields on the Kazakhstan shelf, on the prospects of production, processing and transportation of hydrocarbons. Changes in the comprehensive plan are also connected with the transfer of the terms of the second phase of Kashagan’s commercial development.

By order of JSC KazMunayGas, amendments were introduced into the comprehensive plan for development of coastal infrastructure. A main emphasis was made on the fact that the assessed reserves of the Kashagan field in the volume of 5.2 billion tons are needed to be transported, processed, etc. in a proper time. In this regard, the earlier created bases to support offshore oil operations in the Tupkaragan district of the Mangistau region in the settlement of Bautino – the coastal facilities of Agip KCO and ТеnizService LLP – currently satisfy only the first phase of the pilot commercial development of the Kashagan field. In future, these facilities will not be in a capacity to satisfy the demand under the second and third phases. So, it’s needed to install new yards on production of metalware, moorings on shipment of stone rock, and probably a shipyard.

At the session of the board of directors of CJSC CPC-R and at the extraordinary general meeting of shareholders of JSC CPC-K, Nikolay Platonov was elected as general director of both societies. His nominee was put forward by OJSC АК Transneft representing the interests of the Russian state shareholder. Earlier, N. Platonov held a post of the deputy director of foreign economic relations department of OJSC АК Transneft. CPC’s former general director, Alexander Tarakanov, has left his post upon agreement of the parties. Vyacheslav Sergeyev was appointed to the post of a general manager of CPC expansion project, while Roman Vasiliev – to the post of CPC chief manager, field operations.

The CPC expansion project, envisaging the increase in the capacity of the pipeline system up to 67 million of tons of oil a year (with no use of antifrictional additives), assumes the construction of ten additional oil pumping stations (two – in Kazakhstan and eight – in Russia), six oil storage tanks near Novorossyisk and a third portable berthing unit on the CPC sea terminal, as well as the replacement of 88 km of the pipeline in the territory of Kazakhstan. The project is supposed to be financed basically on the account of the consortium’s own means. Expansion is planned to complete in 2014.