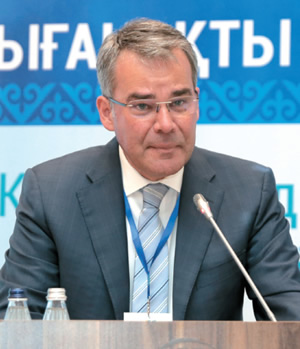 The Forum has attracted more than 130 local and international Engineering, Procurement and Construction (EPC) Services companies interested in establishing joint ventures, in addition to senior officials of the Republic of Kazakhstan Ministry of Energy, the Ministry of Investment and Development of the Republic of Kazakhstan, the West Kazakhstan Oblast Akimat, deputies of Mazhilis of the RoK Parliament, the PSA Authority as well as a number of non-governmental organizations such as National Chamber of Entrepreneurs ‘Atameken’ KazService Association, Kazakhstan Machine Builders Association and Chamber of Commerce of Kazakhstan-Italy (CCIK), UK Department of International Trade (DIT).

The key areas of focus at the Forum were the forthcoming Karachaganak Expansion Project Phase 1 (KEP1), KPO requirements in Goods, Works and Services (GWS) to suppliers as well as the KEP1 Local Content strategy and GWS procurement plans in KEP1.

As KPO General Director, Edwin Blom, said in his opening address, “The Forum brings together two important objectives for KPO - the further expansion of the Karachaganak field and the continuation of the company’s improvements in developing the Local Content”.

According to KPO’s General Director, the company has created all essential conditions to achieve its Local Content target.  In particular, the Company has updated the Local Content Policy and developed a two-year Local Content Development Programme.   These KPO efforts are aimed at supporting the implementation of the state Programme of Industrialization and development of machine building sphere in the Republic of Kazakhstan.

Mr. Blom also noted that the introduction of KPO’s policy requiring all major Oilfield service contractors to have a partnership or joint venture with a local company had allowed a large number of new local companies to be engaged, providing them the opportunity to participate in more complex projects over the last two years. This approach will continue to be used for the KEP1, ultimately allowing KPO to develop Local Content and thereby enhance its contribution to the growth of West Kazakhstan Oblast’s economy and that of the entire Republic of Kazakhstan.

“Very soon we will start the pre-qualification process for EPC potential contractors and they will be requested to establish a joint venture or consortium with local companies, procure Kazakhstan goods and develop local staff. This, we believe, will be the basis for sustainable development of the local market, allowing to bring inward investments and assist in technologies’ transfer”, said Edwin Blom.

“It should be noted that over the past 4 years, the procurement structure for goods manufactured in Kazakhstan has substantially changed.  Whereas in the past the products with low added value (diesel fuel, natural gas, liquid nitrogen) were usually procured; today the more complex locally produced equipment (thick-walled and super-heavy separators, modular power substations, metal structures, transformers, heat exchangers, drilling bits, ball valves, drilling pipes, chemical products, etc.) are now purchased under KPO long-term contracts, which were not previously available. KPO requires tenderers to manufacture the equipment in the Republic of Kazakhstan, according to KPO specifications with ‘Made in Kazakhstan label”, added Marat Karimov, KPO Vice General Director.

Furthermore, KPO representatives answered questions during a round table at the Forum regarding the KEP1’s anticipated demands in GWS. The topics discussed were as follows: strategy of this project in terms of Execution and Local Content strategy, KPO Contracts and Procurement activity, the supplier evaluation and database registration procedure, as KPO tender requirements.

An interactive session was held as part of the Forum, with EPC potential contractors and local manufacturers participating to establish a dialogue.

Summarising the outcome ofthe Forum, Marat Karimov, KPO Vice General Director, expressed his hope that the Forum would encourage local companies to comply with the international quality standards. This would make it possible to increase the local share in all of the consortium’s future projects.

In turn, the Forum delegates noted the excellent organization of the event and its substantial impact. According to the delegates, having a large number of subject matter experts as participants allowed for a thorough discussion and analysis of the issues on the Agenda. 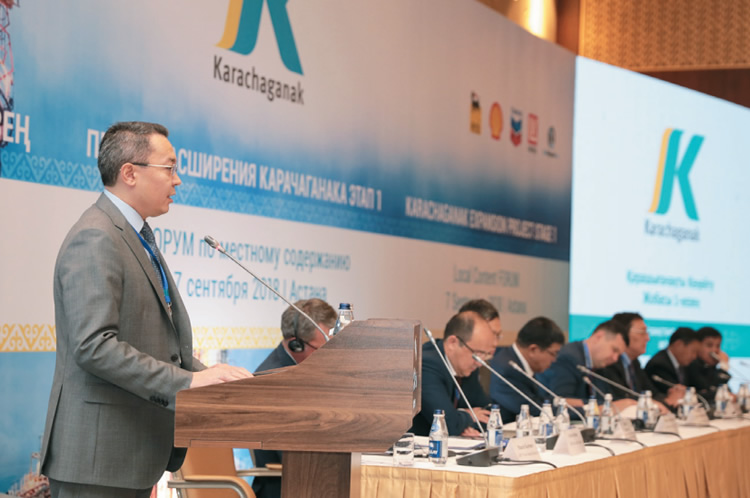