Karachaganak Petroleum Operating B.V. is one of the first companies in the Republic of Kazakhstan to implement the Local Content Development Program successfully. Since the signing of the Final Production Sharing Agreement, thousands of Kazakhstani companies have gained invaluable experience in the world-class project. Thanks to cooperation with KPO, the companies managed to increase production volumes, transfer the latest technologies, find partners to create consortia and joint ventures. Having risen to a new stage of industrial and intellectual development, these local companies have become desirable contractors for all major oil and gas projects in the Republic of Kazakhstan and are ready to go beyond it. 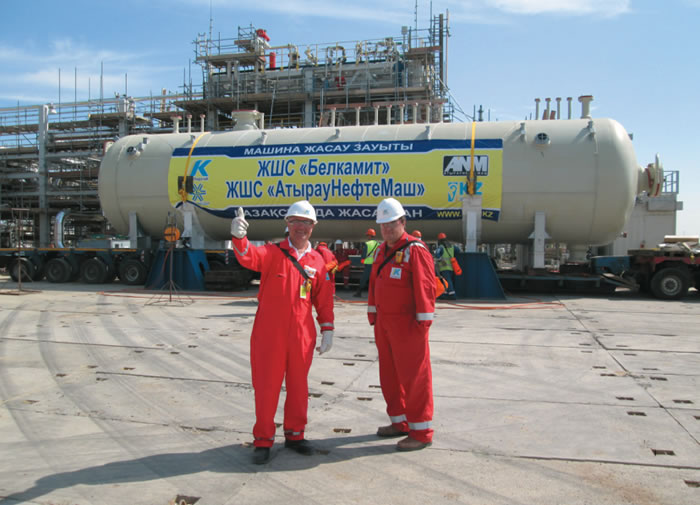 Today, together with KPO, we present several such success stories.

Thanks to cooperation with KPO within the framework of the Local Content Development Program, over the past five years Kazburgas JSC has started to provide new types of services as part of consortia and joint ventures with international oil service providers. Partnerships with international suppliers such as Schlumberger, Weatherford, and Smape contribute to the development of local drilling companies and the transfer of new technologies.

In 2016,  Kazburgas JSC began providing services for underground well repair with the help of slickline units. In the same year, the company launched a diagnostic workshop to provide inspection services for oilfield pipes by API and DS-1 standards, as well as a welding workshop to offer repair services for fishing and milling tools for KPO in a consortium with Schlumberger. The company managed to master the work on pick-up-lay down machines. These services were previously provided only by foreign companies.

History of the partnership of Edil-Oral.kz LLP and KPO began with the signing of a contract for the provision of training and certification of KPO employees in the field of maintenance and installation of electrical equipment operating in an explosive environment under the CompEx program (UK). The next important step was the joint implementation of a unique project of Edil-Oral.kz LLP Service Center implemented within the framework of the Memorandum on the development of domestic industry between KPO, the authorized body – PSA LLP and KAZENERGY Association.

At the stage of construction planning, the company proposed to KPO the idea of creating a service center for explosion-proof electric motors repair with the technical support of the Dutch partner Baker Repair + Services B.V. KPO was interested in this proposal and offered to promote the establishment of the service center through the early tender mechanism. In turn, Edil-Oral.kz LLP assumed obligations under the terms of the project implementation, compulsory international certification for the permissibility, training and personnel certification according to international standards. All commitments were met on time.

In March 2017, at the annual Kazneftegazservice-2017 conference, a long-term contract for the provision of services for the repair of explosion-proof electric motors was signed between Edil-Oral.kz LLP and KPO. Thus, KPO organized the repair of its equipment in Kazakhstan, which was previously carried out only outside the country. Later, the company managed to master a new type of activity – providing services for inspection and maintenance of explosion-proof electrical equipment. As a result of this work, for the first time, there was a certified international training center for the CompEx program in Kazakhstan and CIS countries, as well as the IECEx service center, where repairs, maintenance, modification and restoration of certificates of manufacturers of explosion-proof equipment. Now, continuing to develop the positive experience of cooperation, the company started implementation of projects on production of the innovative explosion-proof powered equipment and expansion of opportunities of the service center.

Karasay machine-building plant in Almaty region, belonging to the PSI ENGINEERING group, was designed to fulfill orders from projects with high requirements for the quality of products. The plant was built at the expense of PSI ENGINEERING and put into operation in early 2017 in the framework of the national teleconference chaired by the President of the country N. Nazarbayev. During the teleconference, the head of state stressed that the country needs high-quality metal structures in the construction of industrial facilities.

To support local producers, at the end of 2017 KPO held a tender with the participation of only domestic producers of metal structures. At the same time, the terms of the contract included a mandatory requirement for the production of metal structures in the Republic of Kazakhstan for the KPC Gas Debottlenecking Project (KGDBN).

In the summer of 2018, according to the results of the tender, PSI ENGINEERING received the first large order for the manufacture and supply of metal structures, thus KPO provided the production load of the new plant for the whole year. Also, the company received a large order for the production of 5 modular substations in Kazakhstan for the same project together with Schneider Electric. The conclusion of a contract with a new supplier demonstrates the true commitment of KPO to the development of local content. Thanks to the order of KPO, the plant improves the level of quality, management of production processes and hopes for future expansion of participation in oil and gas projects.

Justifying the idea of PSI ENGINEERING, the plant also became a supplier of steel structures for projects implemented by Tengizchevroil. Thus, they fulfill the order for combined cycle steam and gas turbine power plant in Karabatan, Atyrau region, and received a request from the American Corporation FLSmidth for the manufacture of structures for their equipment, which allowed to increase the potential for export supplies in the future. 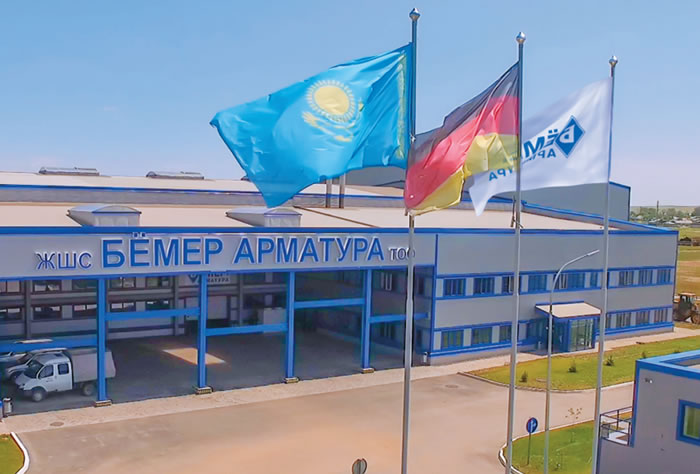 Realizing the importance of developing new types of oil and gas equipment and reducing dependence on imports, in 2012 Zhigermunaiservice launched the manufacturing of drill bits. Their running-in initially took place at the fields, the development of which is conducted by Kazakhstani companies. For the first time, such production is mastered in Kazakhstan. The products were designed for drilling operations in accordance with the individual requirements of the fields, their geological and technical features.

The technological cycle includes bit design, production of its components, experimental design and start-up. To enter the oil and gas market of Kazakhstan, it was necessary to have a large customer implementing an international level project, which would be able to support the domestic plant and provide a detailed geological structure of its field for the design and manufacture of drill bits. KPO was the first customer to trust the machine-building plant. KPO engineers visited the Zhigermunaiservice plant to assess its production capabilities. As a result, in April 2016, KPO placed a trial order for bits produced by Zhigermunaiservice within the framework of the trilateral initiative of KPO, the Ministry of Energy and the authorized body - PSA aimed at the development of domestic industry.

KPO intends to continue to cooperate with Zhigermunaiservice on the development and testing of a new 12 ¼-inch bit.

AtyrauNefteMash LLP is the unique enterprise in the Republic of Kazakhstan which specializes in the production of the equipment for the arrangement of a field, refining, production and collecting of oil, and also the heat power equipment demanded in oil, gas and chemical branches. The history of the company has more than 90 years and reflects all stages of formation and development of the machine-building industry of the country.

For the first time in the Republic of Kazakhstan, AtyrauNefteMash LLP manufactured and supplied a unique three-phase separator according to international ASME standards for KPO within the framework of the oil treatment system modernization. The separator weighing 120 tons was manufactured in Kazakhstan for the first time. In the manufacture of a separator with a wall thickness of 72 mm, special steel was used, 3 mm of which is the Inconel alloy, which allows the product to be used in a high-sulfur environment and at high pressure. In the course of this project, in particular, a new technique of welding for thick-walled metal with a clad layer using a unique plasma cutting technology was introduced. Also, equipment for ultrasonic diffraction-time non-destructive testing was installed, as well as a new heat treatment furnace of larger size.

This initiative is another example of successful cooperation of KPO with Kazakhstani producers in the framework of efforts to develop local content at the Karachaganak project, per the state plans of Industrialization 4.0. Representatives of the customer were present at the plant and took part in the project implementation process. ANM expresses its readiness to participate in both current and upcoming KPO projects and to fulfill orders for the production of containers and metal structures.

In the future, the plant plans to launch new workshops: such as paint shop (1,600 m2), shop for the manufacture of grading and hot-dip galvanizing (5,400 m2), and auxiliary shop (7,776 m2) to the existing heavy engineering shop.

The plant of Boehmer Armaturen LLP is constructed by Böhmer GmbH (Germany), the world leader in the production of the ball shutoff valves delivering its products to 37 countries of the world. The plant was built in the framework of the state program of forced industrial-innovative development of Kazakhstan on the territory of Saryarka SEZ in Karaganda, put into operation on July 2, 2014, during a teleconference with the participation of the head of state. The company has certificates according to the standards: API 6D-API Spec Q1 and API 6D.

Initially, the plant produced products for the needs of housing and communal services, and the development of a new line of products was the first step towards cooperation with customers from the oil and gas industry: ball valves for oil and gas. KPO was one of the first to notice a fast-growing young company. An important step was the arrival of KPO technical specialists in March 2017 to evaluate the products for compliance with customer requirements. During the visit, KPO representatives were pleasantly surprised by the scale of production and the level of technical equipment of the plant. At the same time, the guests left some comments and recommendations for the improvement and modernization of production.

Already in June 2017, the second technical audit took place, which resulted in the signing of a protocol on the implementation of KPO’s recommendations and the inclusion of the plant in the list of potential suppliers of ball valves for KPO. The final chord of the plant’s entry into a new milestone of its development was the placement of a trial order by KPO and the signing in April 2018 of the first contract for the supply of six 4-inch diameter ball valves for testing in industrial conditions, i.e. under the influence of hydrogen sulfide and corrosive environment. Kazakhstani valves made of German alloy in December 2018 - January 2019 have passed all the necessary tests and will be installed at the Karachaganak.

Additionally, the plant is currently developing some new valve designs for the Karachaganak Expansion Project as part of the KPO’s trial order. 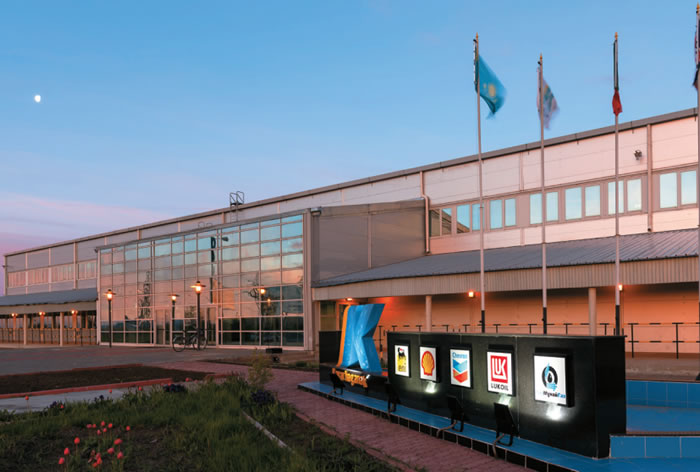