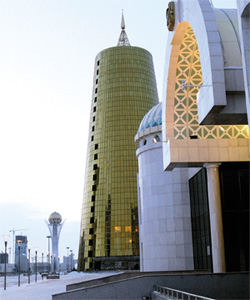 November 11, the press-service of the Ministry of Energy of Kazakhstan reported that the decision was made to return the Khazar and Kalamkas-sea contract territories in the Kazakhstani sector of the Caspian Sea to the country. The Ministry will look for new investors to implement these two projects.
As reported, in October 2019, the shareholders of the international consortium NCOC and Shell announced their withdrawal from these projects, citing their low profitability.
The Ministry of Ecology, Geology, and Natural Resources of Kazakhstan announced the oil show in the Karatau mountains in the South of Kazakhstan, discovered during the search for bauxites.
It is noted that oil showings were first encountered at shallow depths in mountainous areas. The discovery was made in the Turkestan region on the Shokpak site in rocks of Paleozoic age in the intermountain depression.
Earlier, several small gas fields were discovered in the Shu-Sarysu depression, the most known of them are Amangeldy and Pridorozhnoe. "Now the Syrdarya and Shu-Sarysu depressions are becoming promising for the search for oil," – the Ministry said. Exploration and drilling at the sites will continue.
Tengizchevroil JV provided its partners with information on the revised costs for the completion of the FGP-WPMP (Future Growth Project-Wellhead Pressure Management Project) of the Tengiz field. The revised costs are currently under review by the JV partners.
The project budget may increase from about $37 bln to about $45 bln, this was announced during a conference call with Chevron, where it was revealed that in the third quarter, the project's cost and timing assessment was completed, after which the cost estimate increased by 25%. The main reasons for cost overruns are related to the design and construction of modules at the third-generation TCO plant.
Development of the FGP began in 2011 and has entered an active phase in the last three years. Its implementation will increase oil production at Tengiz by 12 mln tons, up to 38-39 mln tons per year.
To read the full article, please log in
Authorization
or register.