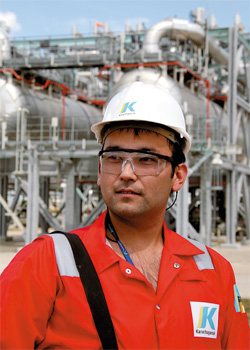 KPO General Director, Edwin Blom, said: “2019 was a tremendously successful and exciting year in many ways.  For KPO it was marked by many important milestones and achievements which are truly remarkable”.
“Last year KPO celebrated the 40th Anniversary of the Karachaganak field discovery.  The partners in the Karachaganak project have signed the agreement sanctioning the Fourth Injection Compressor (4IC) Project.  This is a significant achievementmarking an important milestone in the continued development of the Karachaganak field.
“Also, KPO started up the 5th Trunk Line Project.  Implementation of this Project will help maintain maximum production levels at Karachaganak while maximizing local content during its execution.  KPO has a proven track record of being able to successfully deliver large capital projects”, added Edwin Blom.
The successful implementation of this first plateau extension project is giving high confidence in delivering the two large capital projects currently in execution; Karachaganak Gas Debottlenecking (KGDBN) and Fourth Injection Compressor (4IC) Projects according to the expectations.
Last year, the company also successfully completed the largest Turnaround ever executed in KPO with nearly 3 million man hours recorded.
Edwin Blom, KPO General Director said: “All of the planned work scope was achieved ensuring improved asset integrity, plant reliability and completing mechanical tie-ins for our new projects and the turnaround was completed ahead of schedule”.
KPO launched several initiatives to improve the Safety Culture within the Company and all Stakeholders resulting In very promising results in 2019 despite of the increase worked man-hours, approx. 35 million, due to the projects in execution phase and the Major Turnaround completion.
In 2019, KPO has produced 138 million barrels of oil equivalent of stabilized and unstabilized liquid hydrocarbons, raw and fuel gas. In addition, 8.7 billion cubic metres of sour gas were re-injected to maintain the reservoir pressure, a volume equivalent to approximately 47per cent of total gas produced.  To date, KPO Partners have invested more than $26 billion into the development of Karachaganak.
2019 was also marked by significant achievements in environmental protection.  One of the Company’s primary targets is high production rate and minimal environmental impact.
Last year, gas utilization reached 99.91 per cent.  Total gas flaring volume made up 0.68 tons per thousand tons of produced liquids.  As of today, KPO’s investments into environmental activities has amounted to $405 million.
KPO takes an active part in the Republican environmental ratings and contests.  As part of Kazakhstan’s participation in the international initiative for cooperation in the field of green economy, KPO was awarded a special symbol “Recommended by the “Green Bridge” Partnership Program”.
As KPO General Director, Edwin Blom, noted, “KPO will need to adapt its environmental management system to the new legislative requirements.  In 2020, a long-term plan will be developed for reduction of GHG emissions and improvement of energy performance”.
KPO has been actively promoting development of local suppliers of goods and services. A large number of projects aimed at building local manufacturing capacities have been implemented.
In 2019 the proportion of local content in KPO contracts for the supply of goods and services reached 57 per cent or $684 million in monetary terms.
Ever since the day the FPSA was signed, the Project partners have committed to ensure increasing national content in personnel.  Currently KPO is executing the 4th formal program of workforce nationalization.  In 2019, local staff at KPO made up 96 per cent of total engineering and professional positions and 79 per cent of all managerial positions.  In May 2019, KPO launched the Women’s Network serving as a platform for exchanging experiences, encouraging development, acquiring new knowledge through interaction and cooperation aimed at enhancing internal capacities of KPO female professionals.
KPO also implements a significant number of large social infrastructure projects in West Kazakhstan Oblast.  Overall, to-date KPO has invested $400 million into the social infrastructure development in the region.
Summarising the results of 2019, KPO General Director, Edwin Blom, said: “KPO’s operational base is as strong as ever thanks to teamwork, professionalism, and an ever-present aspiration of the whole KPO team to achieve new milestones.  Looking forward to the next year, priorities remain meeting the ongoing challenges of reaching the highest levels of industrial safety and production”.
“We shall continue to foster our long-standing relationship with the RoK authorities based on our common desire to generate maximum value and the pursuit of sustainable development goals for the benefit of the West Kazakhstan residents and the Republic of Kazakhstan as a whole”, added Edwin Blom.
To read the full article, please log in
Authorization
or register.