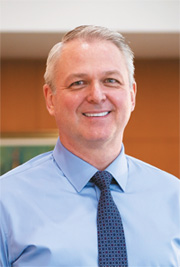 Starting February 1, 2021, the new General Director of Tengizchevroil LLP (TCO), a joint venture leading the development of the Tengiz and Korolevskoye fields.
Kevin Lyon succeeded Eimear Bonner, who has served as General Director since 2018 and, previously, as TCO General Manager of Operations.
Over his 32-year career with Chevron, Kevin Lyon has held numerous engineering and leadership positions in the United States, Nigeria, Philippines, Indonesia, the Netherlands, and Bangladesh. Since 2018, he has served as Managing Director of Chevron’s IndoAsia Business Unit in Jakarta, Indonesia.
In this position, he has been responsible for upstream operations at Chevron’s assets across the Philippines and Indonesia, including the largest waterflood and heavy oil steamflood operations in the Asia-Pacific region. In that role, Kevin Lyon has been managing an organization of over 3,800 direct employees and a total workforce exceeding 30,000.
According to the Company's official statement, Kevin Lyon’s appointment as TCO General Director is based on his proven leadership and relevant upstream international experience.
Eimear Bonner has been appointed to the position of President, Chevron Technical Center, and Chief Technology Officer for Chevron Corporation in San Ramon, California.
“My years of working in Kazakhstan have had a tremendous positive impact on myself and my family. I am truly honored to have led TCO during such an exciting period of growth and to have been a part of this company’s rich history,” said Eimear. “I look forward to continuing to support in my new role.”
According to the General Director of Tengizchevroil, Kevin Lyon, he has already held the first meetings in Nur-Sultan with the officials of the Republic of Kazakhstan. "During these meetings, I realized that TCO is a precious asset both for the country and for the population of Kazakhstan. And I am aware of the importance of the Tengiz field for Kazakhstan and the people of Kazakhstan. TCO is an example of a very strong partnership, and I am pleased to be able to contribute to the continued success of the joint venture," said the new CEO of the Tengiz Project.