The North-West Kyzylkiya field began its story in 2003-2004, when engineers carried out 2D and 3D field seismic surveying in the southern section of the Turgai depression and created structure maps for potential oil deposits, resulting in the North-West Kyzylkiya field opening as a result of well No. 34 being drilled in 2004.
The field belongs to the company Kolzhan, and in administrative terms is part of the Kyzylorda Oblast Syrdarya District and Karaganda Oblast’s Ulytau District.
Mukhitdin Kamzayev and Zhanbolat Zharmukhambetov, both field oil and gas production experts gave us some details about field development and the life of oil workers.
- The North-West Kyzylkiya field was opened in 2004, but when did industrial operations begin?
- The field was commissioned in August 2010, when wells 32, 33, 40, 42, 43, 47, 48, 49, 52, 55, 56 and 57 were put into production. Back then, oil from the wells was collected into holding tanks and transported in trucks.
Construction work on facilities, such as a vehicle highway, collectors, well blowing lines, the MU-1 and MU-2 metering units and group unit, was started in October 2010.
After obtaining all field operating approvals, we began drilling the new Nos. 122 and 124 wells in 2010. In April 2011, facilities were connected to the MU-1 and MU-2 metering units and the group unit was commissioned. The first oil produced came to 830 tonnes (December 2011).
- Can you give us some details of how field infrastructure has developed? 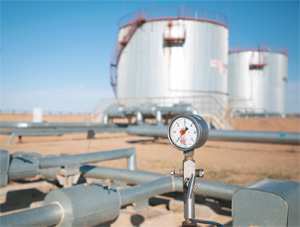 - Since development work began, the field has seen the construction of a number of important industrial facilities.
For example, in 2012 we saw the start of construction of the North-West Kyzylkiya modular group pumping station, and then in 2013 the completion and commissioning of pressure pumps and NWK-34, 38, 233 and 226 wells.
In 2015, phase two expansion work was started at the NWK gathering station. As a result, in 2016, we were also able to install a separator, oil pumps and an oil heating furnace.
Construction was started on new MU-4 and MU-6 metering units once new wells had been drilled in the eastern and western field sections, and commissioned in 2015-2016.
And then, in 2017, we saw the NWK gas piston-type power station commissioned to supply electricity to wells and field facilities. The Zhezkazgan-Baikonyr power line passes to the south-east of the field and supplies it with power.
The majority of the local fields roads are sand and gravel and dirt roads.
- How many wells are there currently at the field?
- At the start of March 2021, we had 90 wells, of which 17 are injection wells. We began in 2010 with only 18 wells, and only opened our first 4 injection wells in 2013.
- Are there any communities or PetroKazakhstan fields in close proximity to the North-West Kyzylkiya field?
- We’ve got the Kumkol field about 40 km to the east. The closest communities to us are Kyzylorda (180 km to the south) and Zhezkazgan (210 km to the north-east).
In addition, the 177 km Zhosaly-Kumkol oil pipeline, which has rail export access via the Zhosaly station (160 km to the south-west) and its oil terminals, passes in a south-west direction 40 km from the field.
- How many people do you have working at the field, and where do they live?
- The North-West Kyzylkiya field currently employs 11 people per shift. In comparison, we had only 4 people back in 2010.
The North-West Kyzylkiya is only small, and does not have its own village; and for that reason, people working there live in the Kyzylkiya field village, 15 km away.
Facts
At 2 January 2015, initial geological / recoverable C1 category oil reserves amounted to 14,709 / 4,489 thousand tonnes, dissolved gas - 1,635.7 / 502.4 million m3 or 86.4% / 92.7% of all geological field reserves.
Well stock at 1 March 2021 amounted to 92.
Between 2010 and 2020, inclusive, a total in excess of 2.5 million tonnes of oil was produced.

History
2003-2004 - 292.65 linear metres of 2D and 92 km2 of 3D seismic work was performed in the Aryskum Depression, at the North-West Kyzylkiya field deposit. PGS-GIS processed the 3D seismic data, which led to the creation of structure maps.
2004 - Kolzhan opened the North-West Kyzylkiya field by drilling well No. 34, where testing confirmed the productivity of the lower Cretaceous period. In geographical terms, the field is part of the southern section of the Turgai Depression.
2005 - “Plans to explore oil and gas at the North-West Kyzylkiya site” were developed using available geological and geophysical materials.
2006 - oil and dissolved gas reserves were first evaluated on the Cretaceous (M-II), Jurassic (J) and Palaeozoic (РZ) production horizons using 3D seismic data interpretations and 22 wildcat wells were drilled, and approved by the Kazakhstan National Reserves Committee.
2011 - BGP reinterpreted 3D seismic work from 2004 and amended the geological structure of the PZ, J and M-II production horizons; and reconfigured the Palaeozoic foundation protrusion border. Well surveying materials were also reinterpreted for new wells, resulting in a detailed stratal correlation for the entire well stock. PZ, J and M-II structure maps and net oil pay maps were created using findings from the reinterpretation of 3D seismic work, well surveying materials and data from 10 new wells. New geological and geophysical work data from 2010-2014 was used as the basis for recalculating oil and dissolved gas reserves from 2 January 2015.
We would like to thank Tuerxun Abudurexiti, Galym Baimanov, Adilbek Bekliyev and Ibragim Mamyt for their help in preparing the information in this article.