Gasoline rivers do not flow abroad 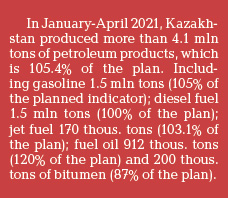 Starting May 9, a joint order of the Minister of Energy, agreed with other departments, has entered into force in Kazakhstan, providing a ban for six months on the export of gasoline, diesel fuel, and certain types of petroleum products from the country by road.
Starting from this day, the transportation across the border of the types of fuel listed in the order is allowed only in gas tanks provided by the manufacturer of motor vehicles and installed following the technical conditions and in separate containers with a volume of no more than 20 litres.
As stated in the order's preamble, this was done "to prevent the occurrence of a shortage of petroleum products on the domestic market." It is no secret that in recent months, Kazakhstan's diesel fuel and gasoline have flowed illegally to Russia, where prices for them are about 40% higher. Fuel and lubricants were exported by heavy trucks, trucks that installed additional tanks, and sometimes fuel trucks. A striking fact is that in the Western border region of Kazakhstan, much fewer people live than in the South of the country, but fuel consumption from oil depots is several times higher here.
Earlier, in January 2021, the Ministry imposed a ban on the legal export of petroleum products while changing the schedule of repairs at domestic refineries to increase fuel reserves in the domestic market. According to Vice-Minister of Energy Asset Magauov, the reserves had to be increased due to decreased production at the Atyrau refinery in January. Power outages from January 10 to 18 in the West of Kazakhstan led to the complete and partial shutdown of the plant's catalytic cracking and reforming units. "Since January, we have stopped exporting petroleum products to increase our reserves. It was a timely measure," Magauov said at a press conference in Nur-Sultan in mid-March.
According to him, as of March 5, the total stock of gasoline in the domestic market was only 218.7 thous. tons, diesel fuel – 306.2 thous. tons. This covers the need for gasoline for 20 days and diesel fuel for 28 days. "We expect that the catalytic cracking and catalytic reforming units at the Atyrau refinery will be launched on March 27, and the plant will reach full capacity on April 15. Thus, this will allow us to synchronize the work of the Atyrau refinery with the schedule of repair work at the Shymkent refinery so that there is no reduction in the balance on the domestic market, " he added.
KazMunayGas and the Ministry of Energy have shifted the schedule of major repairs at the Shymkent refinery. "We had to change the plan of major repairs at the Shymkent oil refinery by two weeks. There are no changes for the Pavlodar refinery yet. The option to shift the repair from the summer period to the autumn is being considered. We can't say the exact date yet, " Magauov explained.
As a result, all the units of the Atyrau refinery were fully brought to the technological mode after repairs on April 28, which allowed to increase the production of high-octane gasoline by two times. The Shymkent plant was put on an overhaul on May 6, and it is assumed that the repair will last no more than a month.  Previously, the plant was stopped for major repairs annually, but after completing the full modernization cycle in 2018, a stop for maintenance is required no more than once every three years.
However, since May, the closure of the illegal export channel showed that this did not solve the sufficiency of fuel and lubricants in the domestic market.
To read the full article, please log in
Authorization
or register.