KIOGE-2021 was held in Nur-Sultan for the first time

The 27th Kazakhstan International Oil and Gas Exhibition KIOGE-2021 was held for the first time in the capital of Kazakhstan, Nur-Sultan. 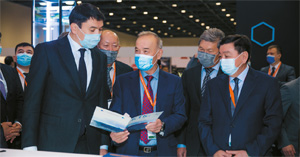 This year, 156 companies from Austria, Bahrain, the Republic of Belarus, Great Britain, Germany, Kazakhstan, the Netherlands, Russia and Croatia. The exposition with an area of 2700 sq.m. covered more than 13 areas of the oil and gas industry, including geology and geophysics, digitalization, non-destructive testing, engineering solutions, infrastructure development and others. The exhibition was visited by 1,526 specialists, including representatives of government agencies, development institutions, industry unions, associations, national and foreign companies employees, and mass media.
On the second day of the exhibition, a VIP tour was held with the participation of Minister of Energy of the Republic of Kazakhstan Magzum Mirzagaliyev, Chairman of the Board of the national company KazMunayGas Alik Aidarbayev, Deputy Chairman of the Board of KMG Zhakyp Marabayev, Deputy General Director of CPC-K JSC Kairgeldy Kabyldin, President of the Kazakhstan Society of Petroleum Geologists Baltabek Kuandykov and Chairman of the Presidium of the KazService Association Rashid Zhaksylykov.
At the national stand of the Republic of Belarus, the Minister was shown the production of seven enterprises ready to cooperate with Kazakhstani companies. Representatives of German service companies also spoke about the intentions of business development in Kazakhstan at the German national stand.
The Minister stopped in detail at the stand of the KazMunayGas company, where he got acquainted with the domestic development – the ABAI information system. This is a full-scale Big Data project using artificial intelligence and machine learning, providing data collection, processing, storage and transmission.
"The exhibition is a significant event in terms of attracting new technologies to our country and finding new contacts between our enterprises for cooperation. The exhibition has a very good future, and I hope that the number of expositions will only grow," Magzum Mirzagaliyev said, answering journalists' questions.
The event was also attended by Kenzhebek Ibrashev, General Director of KAZENERGY Association, Dimash Dossanov, General Director of KazTransOil JSC, Nikolay Gorban, General Director of the Caspian Pipeline Consortium, and a delegation of representatives of oil and gas enterprises of Uzbekistan – Uzbekneftegaz JSC, Bukhara Refinery LLC, Shurtan Gas Processing Plant. The guests got acquainted with the products and services of oil and gas and service companies presented at the exhibition.
In addition to the exhibition part, a fulfilling business program was organized for visitors and participants, including round tables and seminars on various topics. NCOC and Tengizchevroil talked about cooperation opportunities for potential suppliers, a presentation on digital solutions was presented by Honeywell, the Ecolomist magazine and Eco Network LLP revealed the environmental topic. The Trade Representation of the Russian Federation in the Republic of Kazakhstan held a round table on the topic "Russian-Kazakh cooperation in the oil and gas and oil refining industries. Best practices. Prospects". Within the framework of the event, several enterprises presented their products, the trade representative of the Russian Federation in Kazakhstan Andrey Babko, the Director of the Department of International Cooperation of the Ministry of Energy of Kazakhstan Almas Iskhanov, the Executive Director of the KAZENERGY Association Farkhat Abytov and the General Director of the KazService Association Nurlan Zhumagulov made a welcoming speech.
Such major companies as KazMunayGas, the Caspian Pipeline Consortium, TCO, LUKOIL, Tatneft, and TMK presented their stands at the exhibition. The Republic of Belarus and Germany showed national stands and the export potential of enterprises of the Volgograd, Samara regions, Bashkortostan, Mordovia, Tatarstan, the Udmurt Republic and the Khanty-Mansi Autonomous Area was also demonstrated at the event.
The third day of KIOGE was marked by the presentation of awards from the organizers of the exhibition. So, the For Loyalty & Support nomination award was received by regular KIOGE participants and sponsors – Tengizchevroil LLP, Caspian Pipeline Consortium JSC, HMS and NOVOMET. The organizers thanked KazMunayGas, KAZENERGY Association, KazService Association, Petrocouncil and Kazakhstan Society of Petroleum Geologists for fruitful long-term cooperation. And traditionally, the stands of the participants were also marked with nominations. For innovation, the stand of KazMunayGas JSC received the Most Innovative Stand Design award, Tagras company presented the best corporate stand, the best debut went to KazTransGas, and Tatneft took home the Best Stand Design award, the brutal stand of the Republic of Belarus became the best national stand at the KIOGE exhibition.
KIOGE was organized with the official support of the Ministry of Energy of the Republic of Kazakhstan, the Kazakhstan Association of Oil-Gas and Energy Sector Organizations KAZENERGY, NC KazMunayGas JSC, the Association of Service Companies of Kazakhstan KazService, the Kazakhstan Society of Petroleum Geologists and the Council of Petrocouncil Strategic Partnerships.
Tengizchevroil LLP became the general partner of KIOGE-2021. The golden partner is the Caspian Pipeline Consortium, the Silver Partner is HMS Group, NOVOMET was the Bronze partner of the exhibition.
The event organiser – Kazakhstan exhibition company Iteca – thanks all the participants and guests of the event and invites you to KIOGE 2022, which will be held in Almaty on September 28-30, 2022.
Detailed information on the website https://kioge.kz.