The North-Caspian project has become this autumn a major newsmaker in the oil and gas industry. One of the main intrigues of KAZENERGY Forum held in early October in Astana was the question: whether production at Project No 1 for Kazakhstan – the giant Kashaganfielddiscovered 12 years ago on the Caspian Sea shelf – will start in the next year. 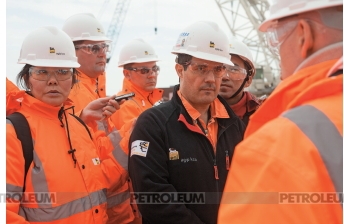 This question was asked practically at all press conferences during the Forum and sounded in the lobbies of plenary sessions. The management of operator NCOC which participated as the conference delegate, confirmed that production will be commenced on schedule, in 2013. Moreover, Timur Kulibayev, chairman of KAZENERGY Association, the person who is undoubtedly well-informed and authoritative in the oil and gas industry, has expressed categorically by declaring to the journalists in the Forum’s first day that production from Kashagan will be commenced in March 2013.

A month later, the new Kazakhstan’s Prime-Minister Serik Akhmetov arrived at Kashagan to see what is happening at the field at first hand. NCOC Chairman and Managing Director Pierre Offant, who accepted the honored guest in the presence of journalists, stated that first oil production from the field will start in few months.

Indeed, the specialists had grounds for doubts: for 12 years the terms of the start of the field’s commercial development were transferred, under arrangements with the government of Kazakhstan, three times. From now on, no more any transfers! To confirm this, NCOC gave the group of local and foreign journalists an opportunity to see personally and make sure that the works under Phase I of Kashagan are almost completed. To reach the place for future production from Аtyrau can be possible in two ways.

The first and the fastest way is by helicopter. In 40 minutes the rotary-wing machine will land you in the heart of the field – D Island. But we were not those to take the easy way out. So, we took the sea vessel intended for transportation of shift workers. Like at the majority of oil and gas projects, the schedule of work here is specific: 28 days in the workplace, 12 hours a day with no holidays and days off, then for 28 days you are replaced with the next relief. Operating conditions are rather difficult: the temperature drop at the construction site is from – 40 º in winter to + 40º in summer. In winter the works in open air are conducted no more than hour, then the workers are warmed themselves indoors. Then again – to the workplace. 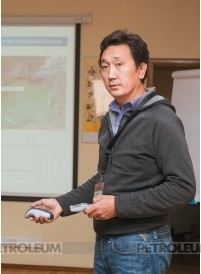 We have noticed the Azerbaijan flag in the captain's cabin of our catamaran. It has appeared that the vessel and its captain are from this neighboring country. Indeed, they have much more experience in offshore oil production: since Soviet times Azerbaijan pumped oil from the shelf. We have no yet such history of offshore oil production, moreover, we lack vessels. “But that'll come with time,” is confident the captain. And we agree with him.

In three hours of confident travel across the boundless Caspian Sea the island appeared in the middle of water smooth surface directly in front of us. No anything special, if not to know that this island was built by human hands. Firstly, the massive piles, one to one, were rammed densely to the sea-bottom along the contour of the future island. All space between them was filled with stone rock and, according to the managers of NCOC, each stone was laid precisely in the place intended for it with the help of GPS system.

The stones were filled up from above with sand, then, a special hermetic membrane made of geotextile material was laid thus excluding hit of any liquid, even the rain water, to the sea. And finally, from above the island is covered with concrete pad on which equipment was mounted. Five such islands were built on the Caspian Sea: the main, playing the role of a hub, D Island, A Island from which production will be conducted, and the so-called centers for compression (such is called the technology of industrial processing and treatment of gas) EPS 2 EPS 3 and EPS 4.