Кudaiberdy Orak, deputy chairman of the Committee of Geology and Subsoil Use 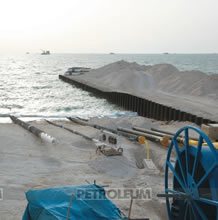 Fifteen sedimentary basins have been allocated in the territory of Kazakhstan: Pre-Caspian, Ustyurt-Buzashi, Mangyshlak, Aral, Syr-Darya, North Torgai, South Torgai, North Kazakhstan, Teniz, Shu-Sarysu, Ili, Balkhash, Alakol, Zaisan and Priirtysh. The total forecasted recoverable resources of hydrocarbon raw materials within these basins are estimated at 17 billion tons, of them 8 billion tons fall on the Kazakhstan sector of the Caspian Sea. More than 250 hydrocarbon fields were explored in the area of the main basins of oil and gas production (Pre-Caspian, South Mangyshlak, Ustyurt-Buzashi, South Torgai and Shu-Sarysu).

By today, the prospects of searches for oil and gas in the Pre-Caspian depression are connected with the unstudied deep laying structures, search for missed deposits on the developing fields, and also are oriented towards discovery of hydrocarbon accumulations over the peripheral sites of saline cores and in subcornice traps. It is possible to discover here nonconventional deposits.

The main gain of hydrocarbon reserves in the republic is connected with the water area of the Caspian Sea the prospects of which with a high degree of reliability are proved by the geological and geophysical study and drilling being conducted here since 1982. A high level of forecasted estimates of the Caspian Sea resources has proved by the discovery in 2000 of the unique field Kashagan, in 2002 – Kalamkas-sea and in 2003 – A`ktoty and Kairan.

Till 1993 geophysical study and drilling of wells on the Caspian Sea were carried out by the Russian and Azerbaijan enterprises: Kazpmorneftegeophizika and Yuzhmorneftegeophizika. Gravimetric (on the area of 60 000 sq. km) and magnetometric (on the area of 50 000 sq. km) study was conducted in the northern part of the Caspian Sea. The Kazakhstan companies did not conduct offshore oil operations as they had neither experience, nor financial assets and technical and personnel potential needed for it.

In December 1993, an Agreement was signed on establishing the international consortium in the structure of Kazakhstan companies Kazakhstancaspishelf (operator) and 6 oil extractive companies – Agip (Italy), British Gas (the UK), BP/Statoil (the UK/Norway), Mobil (the USA), Shell (the Netherlands) and Ti^tal (France) – for realization of the complex program for studying the bowels’ geological structure and developing hydrocarbons on the Caspian Sea shelf.

The consortium conducted seismic survey I`I^GT-2D on the whole water area of the Kazakhstan sector. As a result, it was defined that the major structural elements on land of the Pre-Caspian oil and gas bearing provinces, North-Ustyurt-Buzachi and South Mangyshlak oil and gas bearing regions, are continuing in the water area of the Caspian Sea. Characteristics of the shelf’s sedimentary thickness were studied, and representation on the high prospects of their oil and gas content were confirmed.

In total, over 120 local structures are allocated on the shelf with the total forecasted recoverable resources estimated at 8 billion of tons of conditional fuel. This is commensurable with the cumulative reserves of all fields explored on land in Kazakhstan. According to the volume of forecasted reserves of hydrocarbons in the Caspian Sea, Kazakhstan takes one of the leading places among the Caspian states.

The following activity was conducted by subsoil users within the Kazakhstan sector of the Caspian Sea: