Kazakh-German company Böhmer Armatura LLP launched its production on July 2, 2014, during the teleconference with the participation of the President Nursultan Nazarbayev. On August 30 of the same year, the President personally visited the enterprise and he highly appreciated the launch of the new facility. Since then, the Company has been developing dynamically, and over the past two years, it has reached the planned objectives.

According to the results of 2015, the Company is the winner of the contest&exhibition “The Best indus- trial product of the year in Kazakh- stan”, and during 2016, it passed the certification of API 6D and API Spec Q1, then proceeded with a launch of the first supply of Kazakhstan-made ball valves for the projects of PJSC Gazprom. Andreas K fer, General Director of Böhmer Armatura LLP, reveals the secrets of the production qua- lity that allowed the Company to achieve recognition in the internal and external markets of ball valves.

- The slogan of your products is “Precision in every detail”. Will it be possible to keep traditional German quality of Böhmer ball valves after the launch of production in Kazakhstan?

- Yes, of course. The quality of products is of paramount impor- tance for the family-owned Böhmer enterprise. The ball valves produced in Kazakhstan have the same quality as the valves, arriving from the plants in Germany. All the nec- essary conditions were created for that at a new plant. First of all, we mean the staff of our plant. Most of them were trained at the headquar- ter office in Germany. Secondly, the technical equipment at the plant. When selecting equipment, all long- term experience of Böhmer compa- ny was applied and all the specific production features were taken into account. 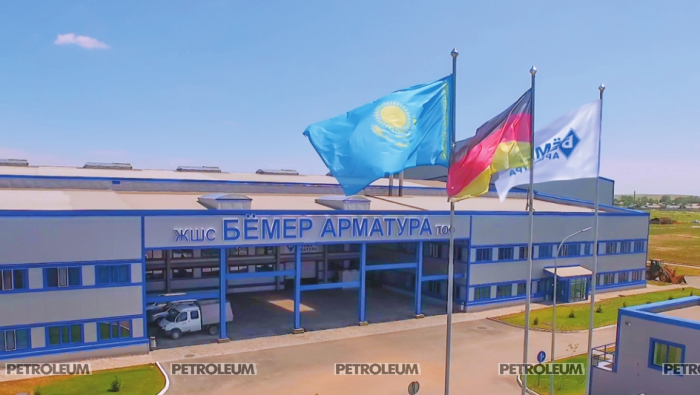 As a result, Kazakhstan- based enterprise received a state- of-the-art machinery, in some cases, surpassing the equipment of the head company. Thirdly, there is the principle of our Company - we pro- vide only the best products. As a result: since the launch of the plant we supplied the most important events in the country, such as EXPO 2017 and the Universiade, with sev- eral thousand pieces of equipment with a diameter from DN25 up to DN1000. We have not had any rejections or any complaints regarding the quality.

- What measures help to maintain the European quality? - Each ball valve produced by our company has the name of the investor’s family - Böhmer. The status of the country’s Innova- tion Program participant gives us even more responsibilities! Qual- ity begins with the choice of mate- rial for the product. We use the highest quality materials; all the details of our ball valve are made of forged steel; the latest technolo- gies are applied.

The enterprise has implemented the advanced qual- ity management standards, such as ISO 9001, API SPEC Q1. Quality control of the production manage- ment is carried out at each stage of production. The specialists of Böh- mer Armatura LLP were trained at the plants, located in Hattingen and Sprockhovel. There have been cases where our employees replaced their colleagues at the German plants and we have received very positive feedback about their qualifications and we treasure them.

- How did you manage to convince such as an important customer as Gazprom that your quality is the best?

- Böhmer products, labelled “made in Germany”, were supplied to Gazprom’s facilities from 2002 and they succeeded to stand the test of time. In order to enter the register of PJSC Gazprom suppliers with the ball valves from the Kazakhstan- based plant, we made a lot of pre- paratory works. In particular, we agreed the technical parameters, prepared the feasibility study and got the necessary certificates, etc.

After that we provided our valves for testing at Saratovorgdiagnostika - a testing site of Gazprom in Sara- tov. In December 2015, based on the successful test results, our com- pany was included into the Register of suppliers of this globally-known organization. Two years ago, it was enough to get started with the struc- tures of Gazprom. Nowadays, it is required to prove that the manufac- tured products are not re-exported ones, in order to make a delivery. The confirmation process is the audit, made by the representatives of this organization. The Gazprom committee has visited us again in the period from August 24 to 25, 2016 and it confirmed our compliance with the requirements.

- If we talk about the track-record of Böhmer in general, what figures can you share with us today?

- For over 60 years of its develop- ment, Böhmer company grew from a small enterprise, which produces the equipment for the mining indus- try, to one of the global leaders in this industry. During this period, more than 38 million ball valves of different diameters are pro- duced and the company’s products are supplied to 37 countries of the world. Nowadays the Böhmer com- pany has four factories, one of which is located in Kazakhstan. Our cus- tomers include such companies, as Chevron, Shell, Siemens, Gazprom, Rosneft and many others.

- Böhmer products can not be con- sidered as cheap ones. What does the customer will obtain, when purchas- ing these ball valves? Will it be cost- saving?

- Taking the decision to invest in Kazakhstan, we wanted to not only produce high-tech, reliable equip- ment that meets the highest stan- dards, but also to become a reliable partner for our customers. We want- ed to accompany them and to help them to revise their approach to the complex equipment like ball valves, its importance in different systems. It is only possible with high-quali- ty equipment. We brought a tech- nology for the production of such equipment in Kazakhstan. Yes, we belong to high-end category, but in the long run the equipment saves the costs. 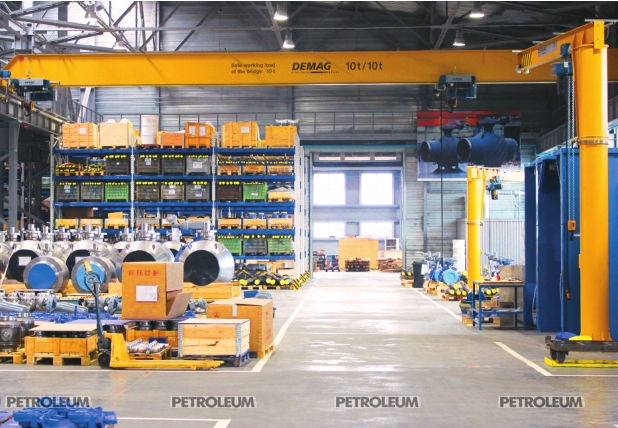 The determined service life of our valves amounts to 30 years. However, if all the recom- mendations for the storage, instal- lation, operation are respected then our valves do not require any addi- tional maintenance throughout the operation period. The design of our valve has a number of technologi- cal solutions that allow to save the operational resources. The product quality depends on the materials used for their manufacture. We use the best of what’s on the market. For example, all the metal parts are made from the forged steel. Also to mention the low torque and the system of dual seals, double ball bracing even for the small diameter valves and much more.

- What the consumers are saying about the experience of using your products?

- The ball valves produced by Böhmer are supplied to the market of Kazakhstan since 2007. During this time, our products have been installed at many state-owned facili- ties in the capital and other cities of Kazakhstan and they proved them- selves for the best. In particular, the following facilities of Astana city are equipped with our ball valves: main heating and pumping stations, CHP 2, NOC Nazarbayev Universi- ty; heat supply networks for Astana EXPO-2017 and many residential complexes. For all the period of supplies, there were no complaints regarding the quality or equipment failure. We retain the European level of quality.

- At present time, the valves market is dominated by the cold stamped met- al, which is cheaper than your forged steel. What can you say about its use?

- There are globally-recognised leaders, with the reputable products among the producers of the above- mentioned equipment. We respect such producers and we are working with them at a good competitive basis in the same market. Once can discuss the advantages or disadvan- tages of such designs, but we are not focused on searching shortcomings of our colleagues - it is just not our way of working.

It is the task for the customers, and everyone chooses what they need. Unfortunately, a big issue for the valves market, especially for the manufacturers like us, are the manufacturers whose primary pur- pose is only short-term profit rather than long-term goal of supplying the facilities with the reliable valves. During the crisis, their number grows and they use the simplified design for the production process. When such “experts” do their busi- ness, offering the dubious goods at knockdown prices, they damage primarily the State which for tax- payers’ money gets the junk mate- rial, secondarily, an entire industry that can not develop further.

- I would like to ask you about the new products of your enterprise. Are there any new designs of ball valves, as a result of cooperation with the companies in the EEU market?

- Yes, in spite of 60-year long experience of the parent company, on which we rely all the time, we are constantly confronted with new challenges. I just want to say that we like such situation, we understand that it helps us to move forward. For example, in cooperation with our parent company in Germany, we are completing the testing of valves with an improved metal-on-metal system. The results surpassed all expectations. Use of such a system will allow us to produce the seals and to supply the equipment to the most complex facilities. There are other such examples.

- How your relations with Kazakh- stani oil&gas producers and the Ka- zakhstan-based foreign operators progress? Does the status of domestic producer help you somehow? 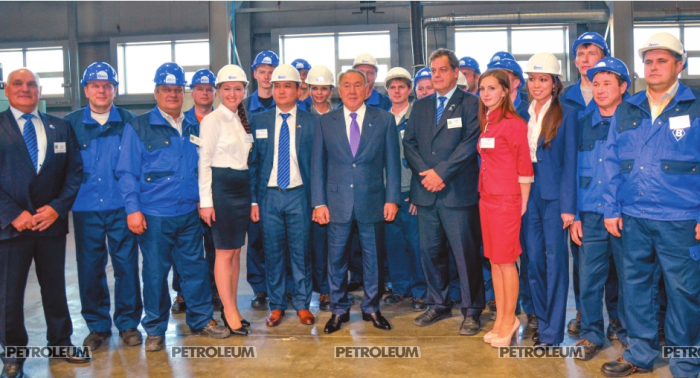 - For Böhmer’s viewpoint, the decision on investments in Kazakh- stan was influenced by the country’s ranking according to the reserves and production of oil and gas. This sector is the main priority of our company. Up to 70% of the produced valves of Böhmer are supplied to the oil&gas sector of 37 countries. We have many hopes, related not only to the program of sup- port for the local manufacturers, but also to our own capabilities. The market has been established with the current range of suppliers and efficient interaction between the companies.

The present time is quite challenging: on the one hand, there are incentives to address the Kazakhstani companies, on the oth- er hand, any costs shall be reduced. For many people it might seems unusual that high quality products, manufactured in Kazakhstan, are so cheap. In addition, the local con- tent-related problems are familiar to us, since they form a part of the development of our enterprise, and there are many foreign components in circulation in present time.

However, nowadays, and par- tially, due to specific actions on the part of the State, we perceive the interest of operators in our prod- ucts, and we consistently make the steps to advance the projects. One of such steps was the product certi- fication according to API 6 D Stan- dard, which is highly demanded by the oil and gas companies of Kazakhstan. This year we have been able to implement the first deli- ver of gas valves and we intend to help increasing the local content in the equipment for the Kazakhstani companies